We returned to the CoAxial segment today to tie up some loose ends left from five remotely operated vehicle (ROV) dives we did in 2005, 2009, and 2011, and an autonomous underwater vehicle (AUV) mapping survey completed in 2009. Colleagues in the 1990s (including Mike Perfit) did extensive mapping surveys, camera tows, and sampling using the Alvin submersible in this area following an eruption in 1993, and we are furthering that work.

We revisited the 1993 lava flows using the AUV one-meter-resolution map as a detailed guide. Several of our objectives today tied to how we interpret features seen in the AUV data, informed by what we learned from previous observations. A primary objective was to confirm flow boundaries and eruptive fissure locations of another portion of the 1993 flows. We collected lava samples and sediment cores for radiocarbon dating for several older flows adjacent to the 1993 lavas. These ages will help us define the recurrence interval for eruptions along this ridge segment. As we crossed the 1993 lava flows, we also collected video transect data on this 20-year-old flow to add to a quantitative study we began in 2005 of animal colonization and population changes as the flow ages. Collecting and dating the lavas of such young basaltic flows is difficult and time consuming, compared with camera tows that have been done along much more of the Earth’s mid-ocean ridge system. Such animal succession data might be useful for estimating ages and eruption recurrence intervals of flows elsewhere. 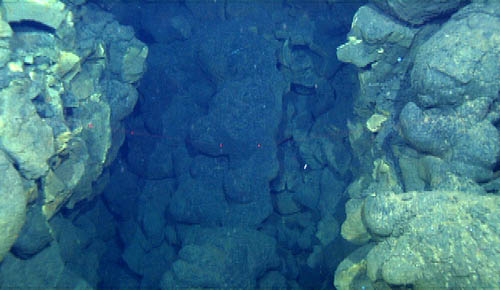 A dike of the 1993 flow lies inside a fracture of an older pillow mound. 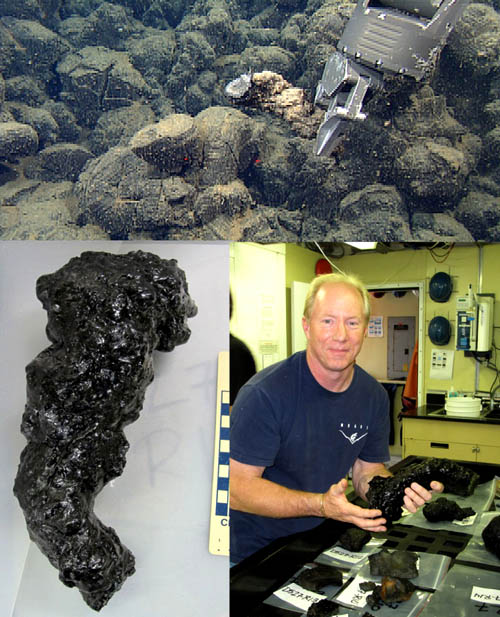 Convoluted pillow bud being collected (top), and cleaned up in the lab (bottom; scale bar in centimeters), while Chief ROV Pilot Knute Brekke admires his the specimen he collected.

Finally, we climbed up Cage Seamount, the largest single volcanic feature on the CoAxial segment, and sampled on the flat-topped summit for lava chemistry and more radiocarbon dating. The north flank is a seemingly endless talus slope that appears to have formed during emplacement of the lava flows. It is similar to several other sites we have studied, including the smooth-sloped cone we dove on at the start of this leg. Several good cores were obtained on the seamount and will provide an age, in turn helping define the magmatic history of the ridge.

The bottom of one of the cores, from the center of the summit in a low depression, poured out when the core was removed from the bottom because it consisted of loose black sand. It is a layer of clastic sediment (volcanic glass fragments) formed during mildly explosive eruptions, similar but much thinner than that found on the caldera rims at Axial Seamount and probably was formed, transported, and deposited in a similar manner. 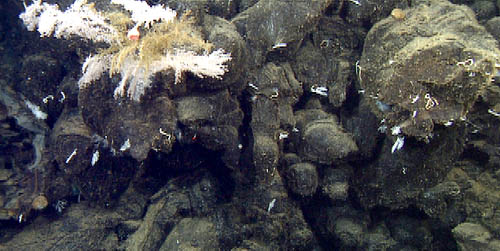 Lavacicle (center) dripped over the edge of Cage Seamount’s outer wall, and is evidence that the talus slope below was constructed while the volcanic cone was growing, rather than simply due to erosion later. The corals (Chrysogorgia) have found an advantageous spot at the very rim.

In three previous visits to CoAxial, we’ve conducted video surveys of the 1993 lava flow. These “biological transects” are recorded close to the seafloor so that we can identify and count each animal. This allows us to see if the assemblage of animals varies as conditions such as the stability of the lava surface, the amount of sedimentation, and food availability change over time. What we are finding is that a new lava flow is similar to a clearing of all the vegetation from a parcel of land; the first thing to come in are weeds, and then much later, bushes and longer-lived trees arrive. In this ecosystem, some small worms are able to feed on bacteria that thrive around the time of an eruption. These are the “weedy” animals. Brittle stars, worms, and small crustaceans need sediment to feed, so some time has to pass until there is enough accumulated on the lava surface for them to survive. The surface layer of younger lava is glassy and delicate, so corals, sponges, and other animals that need something to attach to become too heavy, and fall off. Later, the lava surface is more stable and allows these types of animals to grow.

We collected a specimen of this yet-undescribed enteropneust worm. It feeds with the long mouthparts seen on both sides of the head. The sediment it feeds on is visible in the gut. 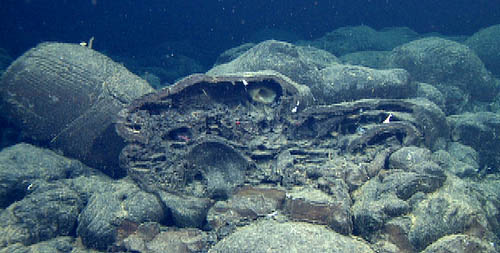 Favorite picture of the day: a lobate lava at the rim of Cage Seamount has been broken open to reveal drainage shelves (horizontal layering) formed while lava was coursing through the pillow, and the mold of an adjacent pillow that formed against it and has since fallen away (just left of center).