We awoke this morning to deceptively calm seas: the still water around us hid turbulent volcanic geology down below; up above, the sunny weather we enjoyed in the morning took a turn for the worse in the early afternoon. Overnight, we had sailed about 50 kilometers (30 miles) southwest into the maw of Axial Volcano, a volcano about one and one-half kilometers (one mile) below the sea surface and measuring over 10 kilometers (six miles) in diameter. Undersea magmas are generated at mid-ocean ridges as well as so-called “hot spots” rising deep from the Earth’s interior—as Axial Volcano sits at the intersection of a mid-ocean ridge and a hot spot, it’s much more volcanically active than the typical undersea volcano. Axial Volcano erupted as recently as 2011. Accordingly, we observed unmistakable signs of voluminous volcanism at our dive sites on Axial Volcano today.

Our program for the day included dives in the morning and afternoon. Our first dive ascended the sheer interior wall of Axial Volcano, which stands 150 meters (about 500 feet) tall above the surrounding seafloor. Lava flows from hundreds of separate eruptions are exposed in cross-section in this wall, which resembles an enormous layered cake. The size and shape of each exposed lava flow (each layer) testify to the characteristics of the eruption that formed that flow. The hollow lavas resembling pillows in cross-section (first image) indicate relatively gentle, low-extrusion-rate eruptions followed by post-eruption drainage of lava, whereas the thick layers of lava pictured in the second image were from voluminous eruptions. These particular layers have been frosted with the red-brown mineral hematite (an oxide of iron) deposited by hydrothermal fluids.

Our second dive descended the southern flank of Axial Volcano. On this dive, we aimed to obtain samples of the sediments that blanket the uppermost lavas on the rim of the volcano. The marine microfossils buried in these sediments can be used to narrow down the age of the lavas below them. We successfully sampled these sediments and also spotted some interesting marine life, as well as an abandoned mason jar (!?). At this point, the weather deteriorated—the winds climbed above 25 knots, tossing us around our ship. For safety reasons, we had to end our dive early. Nevertheless, we retrieved the desired sediment samples, and Chief Scientist Dave Clague rightly pronounced our dive a success. Tomorrow, we plan to sail to our north to investigate some lavas with unusual compositions, away from the turmoil up above on the stormy seas as well as down below at Axial Volcano. 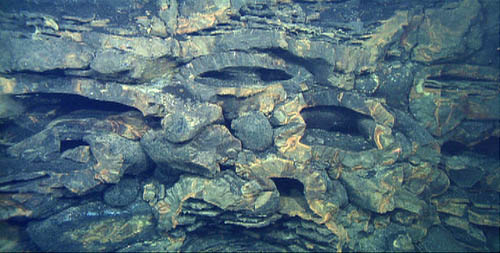 The vertical face of the caldera wall gives us a glimpse into the interior of the volcano, much like a roadcut allows geologists on land to map the stratigraphy of an outcrop. Small hollow caverns, some with drainage shelves, near the top of the caldera wall are remnants of drained lobate lava pillows erupted tens of thousands of years ago and exposed when the caldera collapsed. This style of flow is still very common on the caldera floor. 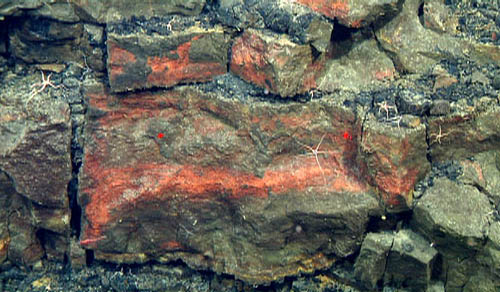 Hematite stains provide some unusual color on a lava flow visible in the wall. Hematite is an oxidized form of iron and indicates that the flow was exposed to oxidizing hydrothermal fluids at some point. The red laser dots are 29 centimeters apart for scale.

The juvenile deep-sea skate (Bathyraja abyssicola, left) is about 50 centuneters wide (about 20 inches). The “blob” sculpin (Psychrolutes phrictus, right) is an odd deep-sea fish that lays eggs in a nest and then tends them (length is about 60 centimeters, or 24 inches). 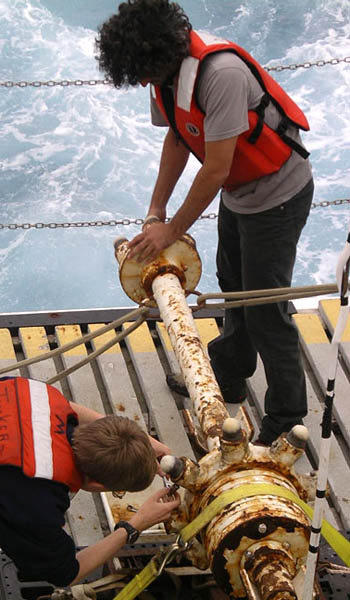 Ryan Portner (top) and Will replace wax-tipped cones on the rock corer on the aft deck. This sampler collects volcanic glass from flows where we will not otherwise have a chance to dive.