We are approaching Newport, Oregon, for a 2:00 p.m. arrival with the slack tide. It has been an eventful cruise that began with a two-day transit from Eureka, California, to Axial Seamount, and is just wrapping up with a 29-hour transit from Axial Seamount to Newport. In between we had some spectacular remotely operated vehicle (ROV) dives, punctuated by one day of foul weather, and ending with a cancelled half-day dive because a hydraulic pump had to be replaced.

For the first time since 2001, our group did several days with two dives per day. These are demanding days considering the depths we work at, because each dive takes roughly an hour to launch and descend, and another to ascend and be recovered. This limits the bottom time for each dive to only about three to three-and-one-half hours—so everything must go right. We were using these dives primarily to test some new methods and equipment to recover cores of a one- to two-meter-thick sedimentary section on the rims of the caldera, where previous attempts had resulted in limited recovery. The sediments are very unusual as they largely consist of angular, sand-sized volcanic glass fragments that impede the sediment from entering the core tube, thereby severely limiting recovery. Collection of this sediment unit has been a goal of our group since 2005, as it records the tectonic, volcanic, and hydrothermal history over tens of thousands of years. The vibracoring system did not greatly improve recovery. New clear polycarbonate tubes were an improvement (probably because the tube surface is slippery compared to the usual metal tubes), but we still recovered less than 50 centimeters of core. In the end, engineer François Cazenave designed and manufactured a new piston-coring system that we used on the final dive with much improved recovery. These cores will be deployed during the next leg at several additional sites where the sediment unit on the rim is thicker than where we tested it this leg. Hope springs eternal that we will finally recover this important unit! Ryan Portner and Christoph Helo will have lots to work with, as we have increased our core recovery in both length and distribution.

During those same dives we made careful video transects up the caldera walls that Tom Kwasnitschka will use to develop three-dimensional models of the caldera walls. These models will be used to examine the fault structure of the walls and to place recovered samples into context. The recovered samples will also allow Brian Dreyer to look at the geochemistry of Axial Seamount during a time period before the caldera formed, and compare it to the more recent (last 1,500 years) flows that fill the caldera and flood the upper rift zones. During the next leg, we will add to these data sets with additional transects and sample collections from the walls, now that we have learned the requirements of the video transects from Tom.

A major objective of the cruise was to expand sampling of the lava flows erupted in 2011 to evaluate variations in their compositions along the eruptive fissures and along some of the long flow lobes. In particular, Adam Soule will be studying this large data set to look at magma degassing along both the length of the fissure system and as flows advance on the seafloor. A five-kilometer-long pillow ridge on the deep south rift had been inferred to be part of the eruption and we spent two full dives exploring and sampling this series of pillow mounds. The ridge is indeed very young and almost certainly is part of the 2011 eruption. Ken Rubin will be dating some of the samples as he outlined in a previous log. However, unlike the flows in and near the caldera, which had high effusion rates, this lower fissure erupted slowly and built near-vertical ridges of pillow lavas. In many places we observed talus at the base of these near-vertical walls that formed during the eruption as pillows tumbled down the slope. In other places, narrow elongate pillows drape the steep slopes. Some of these cascaded over vertical slopes forming what we call lavacicles—long cylindrical or tapering lava drips that look somewhat like stalactites. The new flow overlies flows that generally have thick sediment cover and are therefore quite old (several to many thousands of years). We collected some of these flows and the sediment on top of them. Brian will use the data to fill in the chemical evolution of Axial Volcano in the period between the young caldera-filling flows and the older flows in the caldera walls.

What turned out to be our final dive was back on the 2011 lava flows in and near the caldera. Christoph summarized the observations and sampling there in a previous log. One aspect of interest was to look for glass fragments along the edges of the flow, or other evidence that the lava interacts with water in the underlying sediments. We found abundant evidence that the margins of the flows can burrow within the sediment and that trapped water can cause small steam explosions that break up the lava flow into angular blocks, but we did not observe abundant volcanic sands around the flow margins. Examination of the cores will establish if flows advancing over thick sediment can produce the abundant fluidal glass fragments that occur abundantly at Axial Seamount, and elsewhere along the global mid-ocean ridge system.

Next leg, we will return to Axial Seamount to continue video transects and sampling on caldera walls, coring of the thick sediment unit on the rim, but will also explore several cones on the north rift with unusual morphology and chemistry (determined on rock crusher samples collected 15 years ago). One dive is also planned to determine the extent of a large flow that flooded out of a deep lava pond complex on the south rift when the 90-meter-tall levee around the pond failed, and explore a large flat-topped cone on the CoAxial segment of the Juan de Fuca Ridge, about 50 nautical miles north of Axial’s summit. So stay tuned, as we should have new dives coming up following our port call in Newport. 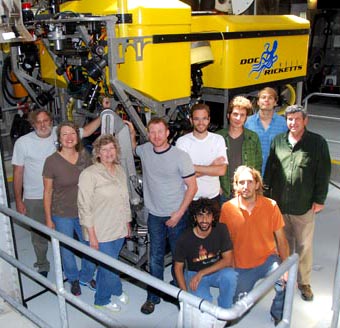 As in all complex endeavors, a lot of people work behind the scenes to make this all happen. You have met our science party through these cruise logs, and I shall simply say, everyone worked hard, contributed to the success of the leg, and was a pleasure to have on the cruise. The ROV team, led by Mark Talkovic, with Randy Prickett, Bryan Schaefer, Ben Erwin, and Dave French did the impossible, which is what we have come to expect! Captain Andrew McKee and his whole team worked tirelessly to keep everything running smoothly and to fix problems quickly. John Ferreira manufactured parts for the new piston corer back at MBARI on very short notice and got them shipped to Newport for the next leg of this expedition. Eric Fitzgerald kept us fed too well and thwarted any hope of losing a pound or two during the leg. Two crew get special mention: Fred Peemoeller who ran the winch during almost all the wax-corer operations in the evening (including in the driving rain during our one-day storm), and Eric, who not only cooked the great meals, but also used his emergency medical technician (EMT) training to deal with an injury sustained when a metal door closed on a finger. Thanks to all. 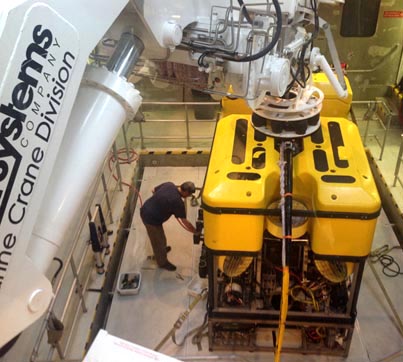 Dave prepping the cores mounted on the swing arm of the ROV for the next dive. The ROV is tied down in the moon pool area of the ship.

Panorama of the Oregon coast at Newport, from the bow of the Western Flyer. 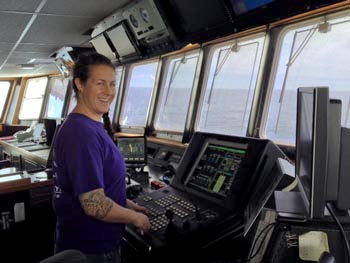 Second Mate Miriam Anthony on the bridge of the R/V Western Flyer. 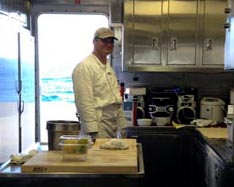 Relief Steward (and gallant emergency medical technician) Eric Fitzgerald in the galley of the Western Flyer. 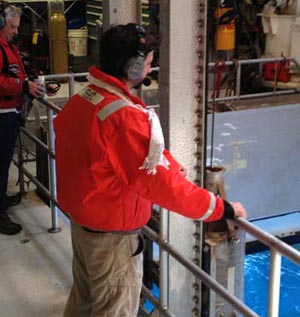 ROV Pilot Bryan in the chilly moon-pool area as the ROV is being recovered after a dive. 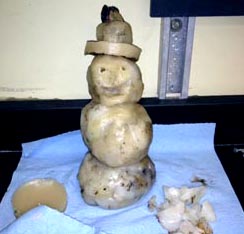 Sculpture made from the used wax-tipped corer wax after the sampled glass chips have been melted away. 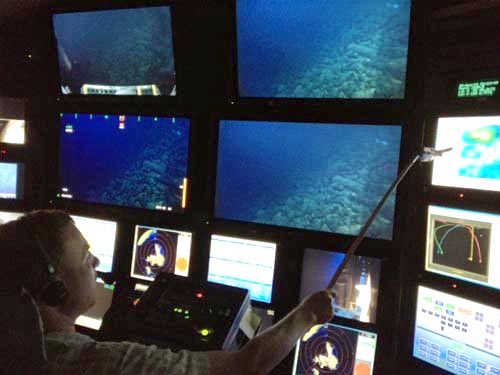 Adam Soule engineered this pointer from a meterstick and laboratory glove. He is using it in the ROV control room to gesture to the map on which our ROV position is displayed.