Our exploration of the circa 2011 Axial Volcano South Rift Zone eruption continued today with remotely operated vehicle (ROV) Doc Ricketts dive 521. Today’s dive targeted several large mound structures within the 2011 flow, including the tallest mound, which is over 120 meters thick (as determined from comparison of pre- and post-eruption bathymetry), as well as several other circa 2011 structures and older terrain surrounding the young flow. Highlights of today’s observations include: very steep-sided pillow mounds with elongated tubular pillows and “lavacicles” (long skinny extrusions of lava coated with delicate spun glass structures), which occur in both the circa 2011 eruption and older pillow mounds to the west of it; the northern remnants of a large lava lake that the MBARI team discovered in previous years; and a low, gently sloping cone of older lava with a 57-meter-deep crater at its summit. We descended into this crater, which has a 100-meter-wide rim and narrows to just 30 meters wide at its nadir, observing layer upon layer of thin lobate lava flows in the crater wall, occasionally covered over by a veneer of lava that formed when the crater was filled with a lake of molten lava that then drained.

You may have noticed that we have been referring to 2011, circa 2011, 1998, and older eruptions on this cruise log. That’s because eruption timing is a very important aspect of volcano study. Except for the rare few ocassions when we observed an eruption happening or caught it on monitoring instruments, one of our most difficult jobs as volcanologists is to try to determine when eruptions happened, how long they lasted, and how long it takes to make magma. We have multiple tools at our disposal for these tasks, which happen to be one of my main interests in this research expedition. I do this by measuring naturally-occurring radioactive isotopes in the lavas. These methods can be used to determine eruption ages, and the timescale of magma formation and storage in the crust, using isotopes with half lives as short as 138 days (210Po), as well as longer-lived isotopes such as 226Ra (1,600 years half-life) and 210Pb (22 years half-life). Most of this work is done on shore, in the lab (where we separate out the isotopes of interest using chemical methods, and then measure them on mass spectrometers and radiation counters).

One of my first tasks after the cruise will be to begin work, using 210Po, to see if we can determine, even approximately, the age of the young South Rift Zone lavas. This will be important to see if they were erupted contemporaneous with the summit eruption in 2011, or erupted before or after that. This will be an important clue to understanding how the magma system at the rift zone is related to the summit magma chamber at Axial. Another longer-term task is to measure 210Pb-226Ra-230Th radioactive disequilibrium in these and other lavas collected on the trip, to help determine the eruption sequence at Axial over the last century or so, as well as the pre-eruptive magmatic timescales at Axial. At other volcanoes, we have been able to show with this method that two or more eruptions in a sequence were fed by the same mantle-derived magma, so that eruptions were triggered by melting rather than new magma injections at depth. Time will tell what we learn from these studies at Axial, but they will no doubt contribute to our ever-deepening study of this very active mid-ocean ridge volcano. 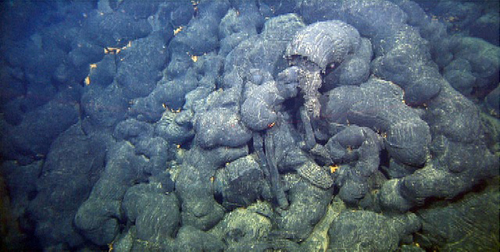 Lava pillow that broke open then disgorged some more lava, which stretched and dripped off as a “lavacicle” (see photos below). Other pillows in the view have elongate pillow buds that flowed down without breaking. 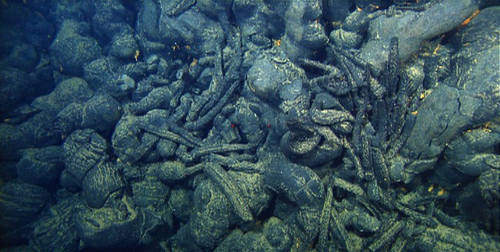 “Lavacicles” lie where they dripped from above, on a steep wall of pillows from the 2011 eruption. Talus is usually an erosional product, but when it forms during the eruption, like at these steep pillow mounds, it is constructional. Amazingly, they didn’t shatter when they landed. 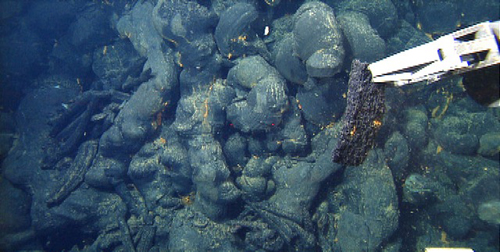 Lavacicle being collected by the manipulator arm. 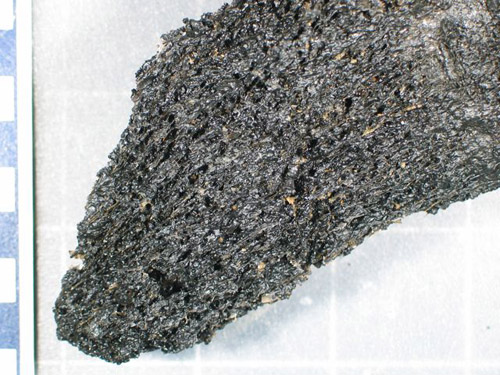 Very tip of a lavacicle, photographed in the lab. The scalebar is in centimeters. Interestingly, lavacicles we have found elsewhere have smooth glass surfaces, whereas all that we collected from Axial’s South Rift Zone had this delicate network of stretched glassy bubbles that resembled limu o Pele and Pele’s hairs. 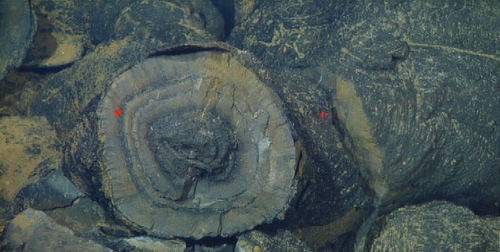 Face of a broken lava pillow. The layering reflects the gradual cooling and thickening of the rind with repeated injections of lava through the pillow. The red lasers are 29 centimeters apart for scale. 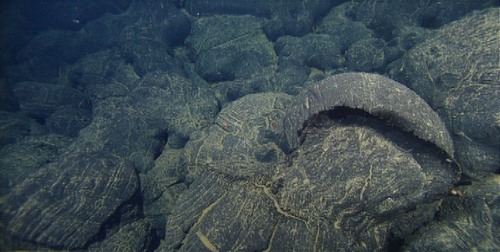 The lava pillow to the right broke open and drained another pulse of lava. 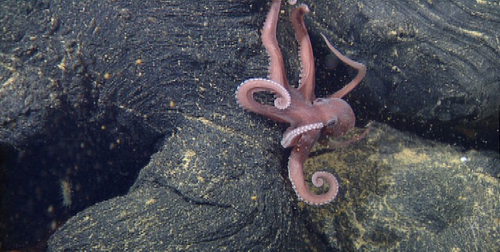 A Benthoctopus has ventured onto the otherwise rather barren 2011 flow.