Making the most of bad weather

A low-pressure system moved in last night and it has been raining and blowing more than 25 knots all day. The motion of the ocean has the ship moving about more than it has since we left Eureka, but everyone seems to have their sea legs and, as usual on this remarkably stable ship, my coffee cup stays where I put it. Unfortunately, however, the Perseids meteor shower was obscured by the clouds. Today’s dive with the remotely operated vehicle (ROV) was delayed and then ended early due to the weather. We have made up for it with wax-tipped corer deployments, and every two hours or so we get a new sample. The ROV dive was near the west wall of the caldera at Axial Volcano. The plan was to explore an unusual-looking feature on the caldera floor, ascend the caldera wall, and core the sediments at the top. We had about half an hour on the bottom, and that gave us enough time to answer one burning question, which was whether the unusual feature we had identified in our high-resolution AUV bathymetry was a lava flow or a landslide. It is indeed a lava flow, with the chaotic, blocky texture of an ‘a’a flow rather than the usual lava morphologies we encounter on the seafloor (sheet flows, inflated lobate flows, and pillow mounds), and it appears to have cascaded down the wall from a fissure that intercepted the wall. Landslides of talus, on the other hand, occur many places along the base of the wall (see yesterday’s post), and the texture of those slides in the map from the autonomous underwater vehicle (AUV) is more of a smooth apron. 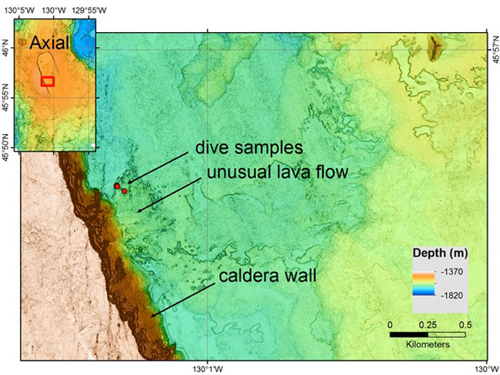 Bathymetric map of the dive site today, just to the east of the base of the caldera wall. The unusual lava flow we targeted spills out from the wall, and has a different texture from the smooth talus aprons (see yesterday’s post for a photo) that ramp against the wall elsewhere, such as where the “caldera wall” arrow points. Our sample locations are the red dots. The map was generated by MBARI’s mapping AUV and is at one-meter resolution. The inset map shows where we are at the summit of Axial Volcano. 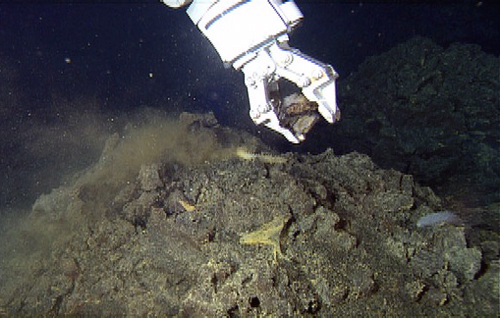 Sampling the lava flow today with the ROV’s manipulator arm. The lava lies in rough, chaotic, glassy heaps on the seafloor, rather than as a coherent lobate or pillow flow. It is not fresh, and two different kinds of sea cucumbers and some other creatures are crawling over it.

Today the weather limited ROV operations allowing for a marathon of rock crushing. Rock crushing (a.k.a. wax coring) uses a heavy weight with wax covered studs to collect rocks from the seafloor. The device is deployed from the ship on a winch and lowered to the seafloor at speeds up to 45 meters per minute. The heavy weight breaks up the lava flow surface when it hits and small pieces of volcanic glass become embedded in the wax (a mixture of surf wax and vaseline). This operation allows the scientists to get their hands dirty as they man the ‘tag-lines’ that stabilize the weight as it is deployed and recovered off the back deck of the ship (see picture of Brian and Ryan). The rock samples we are recovering are from the 2011 eruption of Axial Volcano. I am interested in these samples in order to investigate how the lava degasses as it flows across the seafloor. Much like a bottle of soda that begins to make bubbles after you open the top and release the pressure, magma contains a number of dissolved volatiles (gases)—with H2O, CO2, and S being the most abundant—that begin to make bubbles once it ascends from the melt lens (magma chamber). The rate at which the volatile elements move from the liquid to the gas phase happens at a somewhat predictable rate, so that by measuring the amount of dissolved and exsolved gas in a suite of lava samples, I can infer the rate at which the lava was moving across the seafloor. Because we have yet to observe a mid-ocean ridge eruption in progress, constraints on the dynamics of the eruption that we can gain using this method are very useful. 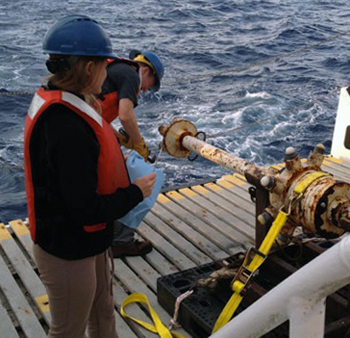 The wax-coring device is very low-tech and has been getting more and more rusty with each passing year, but it still works splendidly. Here its wax-tipped nose cones are being prepped by Sarah Glancy and Adam Soule on the well deck of the ship. 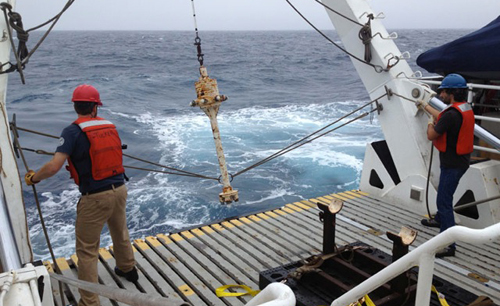 Brian Dreyer and Ryan Portner help control the deployment of the wax corer with tag lines.

Sample! Wax-tipped cores await processing onboard (left). The embedded black volcanic glass chips will be scraped into beakers of water so they can be melted away and separated from the wax in the hot Crock-Pot (right). In the lab the chips will be mounted onto microscope slides for chemical analysis with an electron microprobe.

This area of seafloor supports a variety of marine life, but animals are not very abundant in this inhospitable place. While we typically see fishes, crabs, sea cucumbers, and lots of brittle stars, the majority of animals are very, very small. If we look closely at the lava surface, we can sometimes see things like worms and juvenile sponges just starting to grow. Bacteria coat the rocks in places. But many animals live in, or feed on, animals that only live in sediment, which takes a long time to accumulate after a new eruption. This is one of the reasons we’ve observed that older lava fields have many more organisms living on them. On today’s dive, we were able to collect two animals of interest. I was excited to see this six-rayed seastar (below left), which is probably a member of the family Pedicellasteridae. We have only seen it very rarely and it could be a new species. We are hoping that our colleague at the Smithsonian, Chris Mah, will help us confirm that when we get back onshore. The animal on the right is an urchin. While this general type of animal is common in shallow water, we haven’t seen this particular species before. The long, very fine spines were beautifully purple and iridescent under the microscope.