As mentioned in previous posts, Eel Canyon has many gas vent sites. The Earth’s crust has weak points that allow gases to percolate upwards through the ground toward the seafloor. This process can create seafloor mounds such as the one we explored today. On many areas of this mound, we found gas escaping through cracks in the seafloor. As gas makes its way toward the seafloor, it comes into contact with water. Under specific circumstances, namely low temperatures and high pressure, the gas and water combine to create gas hydrate. As hydrate forms, it expands, which can cause bulges in the seafloor. When we find a chemosynthetic clam patch associated with a mound, we may also find gas hydrate lens slightly exposed. Often, this means there is more hydrate hiding under the sediment.

The gas that combines with water to make hydrate is usually methane, but there are different forms of hydrate that can contain larger molecules. Tom Lorenson, a scientist from the U.S. Geological Survey who is with us on this cruise, studies gas hydrates. Today, we managed to collect a rather large piece of hydrate. This is no small feat because as we ascend, the water temperature rises and the pressure decreases, causing the hydrate to decompose. The hydrate matrix breaks up, releasing the gas. The key is to get a large enough piece that there will still be some hydrate left when the remotely operated vehicle (ROV) reaches the surface.

In the past, the ROV pilots have collected gas hydrate with MBARI chemists in the Brewer lab. When Charlie Paull said let’s get a piece of that hydrate, Randy Prickett and Eric Martin set out to try to collect the largest piece of gas hydrate possible. 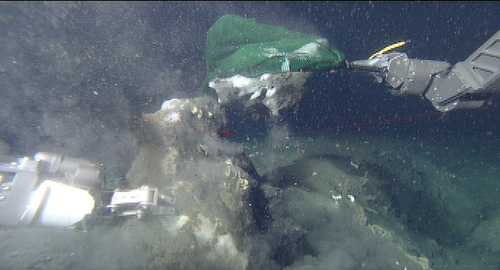 ROV Pilot Randy Prickett grabbed this large piece of gas hydrate, but as you can see, he bit off a little more than the manipulator can chew!

Randy and Eric worked as a team to break the large piece into smaller pieces, while trying to capture the floating small pieces in a mesh bag. This large sample did come up in smaller pieces, albeit much smaller. 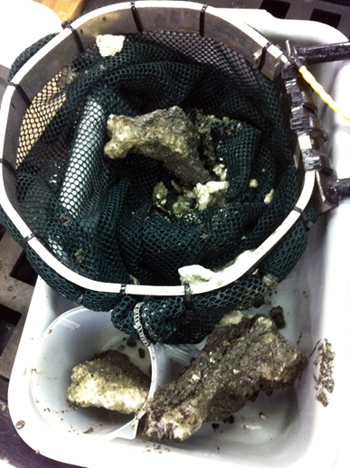 These pieces of hydrate are what are left from the large sample taken at the seafloor. 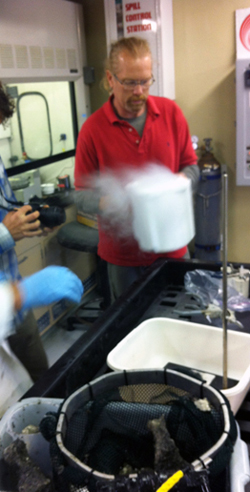 Tom Lorenson takes a few small pieces of hydrate and submerges them into liquid nitrogen for later analysis. He will use x-ray diffraction to classify crystalline structure of the hydrate and scanning electron microscopy to get images of the structure.