Over the last week, we’ve had incredibly calm (foggy, but calm) weather. This weekend however, the winds at Eel Canyon were hovering around and above 30 knots. As a general rule the crew and pilots avoid operating the remotely operated vehicle (ROV) Doc Ricketts when winds are above 25 knots because the high winds make deployment and recovery much more difficult.

Eel Canyon is north of Cape Mendocino. On Saturday, the swell was heading south along the coast, so we went south in the lee of the cape to find better weather. There are at least 10 canyons along the California coast between Monterey Bay and Eel Canyon. For marine geologists like Charlie Paull and his team, this gives them lots of options should the weather in one area cause them to have to find another place to work.

In the late afternoon and evening on Saturday, the ship sheltered in the lee of Cape Mendocino where the weather was a bit calmer. Only in northern California can we have winds over 30 knots and fog at the same time.

On Saturday morning, we were able to find favorable weather to work at the head of Mendocino Canyon. This was a rare occasion when the team worked in an area without a detailed bathymetric map. The goal was to transect and collect cores across the canyon head, but it was somewhat difficult to figure out exactly where we landed. While feeling our way around this canyon head by following depth profiles, we experienced something that Charlie has been studying for years—a turbidity current. A turbidity current is a sediment-laden, rapidly moving current moving down slope. It can be caused by slumping events (underwater avalanches) in canyons that may be triggered by an overload of sediment that finally gives way, or by earthquakes. Storm surge in rivers can also result in turbidity currents because riverine water with high sediment load can become more dense than seawater, pushing the water down canyon.

As we worked around the head of Mendocino Canyon, we found ourselves surrounded by sediment, high currents, and warmer water. To quote ROV pilot Mark Talkovic, “It was like flying the ROV in a tornado!” The ROV moved 150 meters away from where it started and Mark could do little to stop that from happening because the currents were so strong. As we monitored the conductivity, temperature, and depth (CTD) data, we saw that the water had gotten warmer and fresher. We had experienced a turbidity current firsthand, something that Charlie has been deploying instruments in Monterey Canyon to monitor for years. I don’t think he ever thought he’d be in the right place and the right time to measure one directly with the ROV. We are not sure what caused the event, but knowing the exact timing of an event is a rare opportunity. Normally, Charlie and his team date layers from cores to try to estimate when the layers formed, but these dates can only be estimated within decades, certainly not to the day. Considering that it is impossible to predict when turbidity events will occur, we’re feeling pretty lucky that we witnessed it! 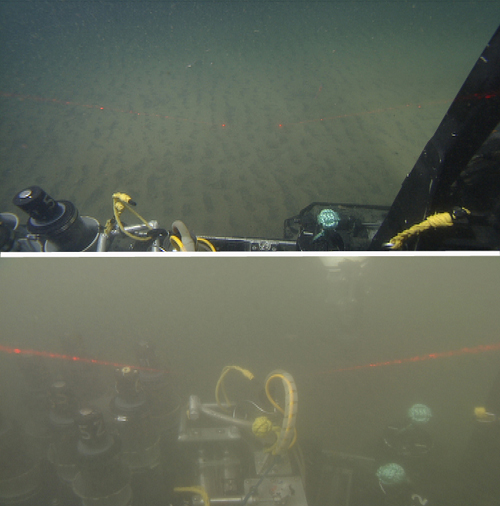