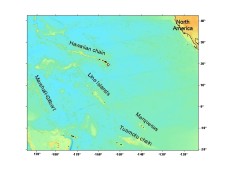 Some linear chains do not fit the standard models

Some linear chains of submarine volcanoes, such as the Line Islands in the Central Pacific, are not associated with a hot spot or mid-ocean ridge, and do not become progressively older with distance.

Our research on non-hot-spot linear chains

LINE ISLANDS – New data from rocks sampled from nine volcanic edifices in the northern Line Islands region, between latitudes 20°N and 6°N, are incompatible with single or multiple hot spot models: the rocks do not become progressively older with distance. Instead, two major episodes of volcanism, each lasting ~5 Ma and separated by ~8 Ma, occurred synchronously over long distances, not just along the main chain but also at nonaligned edifices. Volcanism during the older episode (81–86 Ma) extended over a distance of at least 1200 km along the eastern part of the complex seamount chain. Volcanism during the younger episode (68–73 Ma) was concentrated in the western part of the chain and may have extended over a distance of >4000 km.

Chemical analyses of 68 samples represent a compositionally diverse basaltic suite. The most diverse assemblage of rocks was recovered from a cross-trending seamount chain south of Johnston Atoll. Although compositions of rocks from the two volcanic episodes overlap, compositions from the younger episode generally are more alkalic and include a larger proportion of highly differentiated compositions. None of the samples from the older episode, but many from the younger one, contain hydrous mineral phases such as amphibole and biotite.

Extensive coeval volcanism along major segments of the chain is compatible with decompressional melting of heterogeneous mantle due to diffuse lithospheric extension along pre-existing zones of weakness. Episodes of volcanism are probably related to broad upwarping of the Superswell region in the eastern South Pacific, where these lavas originated.