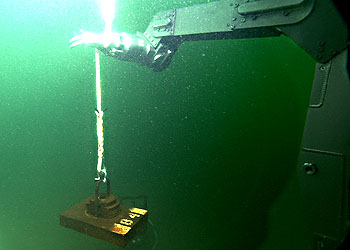 The National Oceanic and Atmospheric Administration’s (NOAA) Monterey Bay National Marine Sanctuary and the Monterey Bay Aquarium Research Institute (MBARI) announced today the winners of their design competition for an “environmentally-friendly” anchor. The competition, initiated in spring 2005, offered two $400 prizes for the best design for a reusable anchor and the best design for a “disposable” anchor (using materials that minimize environmental impacts). The contest focused on anchors that could be used to secure scientific instruments to the seafloor.

“Our goal with the contest was to raise awareness among scientists about the desirability of removing scientific equipment from the sanctuary after research projects are completed,” said Acting Sanctuary Superintendent Karen Grimmer. “We would rather that researchers left behind nothing but bubbles.”

More than a dozen entries were received from across the United States, including one from a 16-year-old high school student. A panel of marine engineers and environmental scientists evaluated each entry based in its environmental impacts, feasibility, and cost-effectiveness. Despite competition from across the country, the winners of both awards came from the Monterey Bay area. 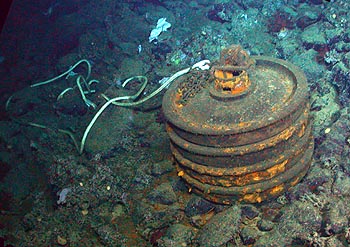 The best “disposable” anchor design was submitted by Arrol Lund of Pacific Grove. This anchor uses an inverted plastic “bucket” filled with sand. A lid on the bottom of the bucket keeps the sand inside while the anchor is being lowered to the seafloor. However, when the anchor is lifted up, the lid flops open, releasing the sand onto the seafloor. This makes the anchor light enough to be hauled to the surface easily.

The best reusable anchor design was submitted by MBARI’s Dr. Jim Barry and two MBARI marine technicians, Mike Conway and Mike Burczynski. Their design addresses a common problem for oceanographers—how to recover instruments that are anchored to the bottom but float within the water column rather than at the surface, and are thus inaccessible to surface vessels. To address this problem, the team suggests attaching a long reel with a float onto the line that holds the instruments. When the experiment is complete, the reel would be released automatically, and would then float to the surface, spooling out line as it goes. After the float and reel reach the surface, researchers would use the line to pull up both their instruments and their anchor.

The next steps for this project include convening discussions with west coast researchers who commonly need to deploy large anchors. Discussions will focus on further evaluating and refining design and cost effectiveness issues relating to possible future installations.

Background on NOAA and the Monterey Bay National Marine Sanctuary 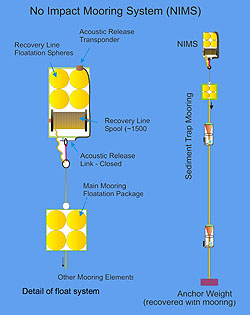 This anchor design, proposed by an MBARI scientist and marine operations technicians, uses a floating reel of line to haul the anchor to the surface after the scientific experiment is complete. Image: (c) 2006 MBARI

The Monterey Bay National Marine Sanctuary stretches along 276 miles (444 km) of central California coast and encompasses more than 5,300 square miles (about 13,700 square km) of ocean area. Renowned for its scenic beauty and remarkable productivity, the sanctuary supports one of the world’s most diverse marine ecosystems, including 33 species of marine mammals, 94 species of seabirds, 345 species of fishes and thousands of marine invertebrates and plants.

The National Marine Sanctuary program is managed by the National Ocean Service which is an office of the National Oceanic and Atmospheric Administration (NOAA), an agency of the U.S. Commerce Department. NOAA is dedicated to enhancing economic security and national safety through the prediction and research of weather and climate-related events and providing environmental stewardship of our nation’s coastal and marine resources. Through the emerging Global Earth Observation System of Systems (GEOSS), NOAA is working with its federal partners and nearly 60 countries to develop a global monitoring network that is as integrated as the planet it observes. 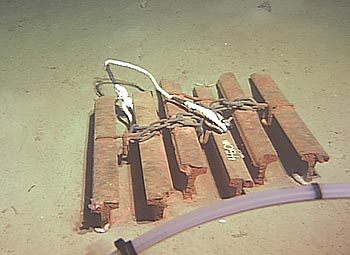 Researchers sometimes hold their equipment in place using scrap iron, such as these broken rails from an old railroad track. 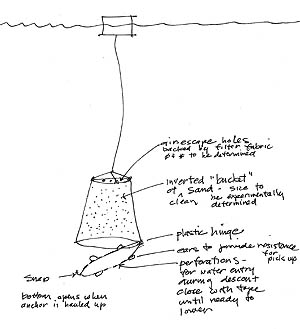 This sketch shows the winning design for a “disposable” anchor system created by Arrol Lund.

May 19, 2022 – Karl Pister, former MBARI board member and UC Santa Cruz chancellor, died on May 14, 2022.
March 22, 2022 – MBARI’s 2021 Annual Report provides a visually rich overview of some of our latest research and technology developments.
April 8, 2021 – MBARI’s 2020 Annual Report provides a multimedia view of the institute’s latest research and technology.