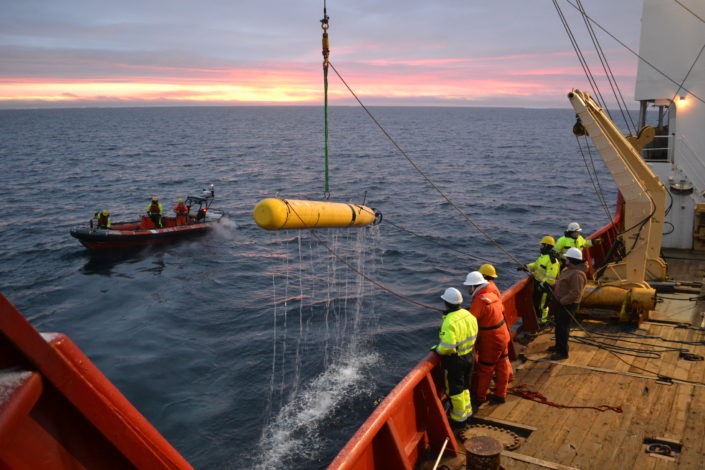 Building on a successful marine geoscience program onboard the R/V Araon in the Canadian Beaufort Sea in 2013 and 2014, the Korea Polar Research Institute (KOPRI), Natural Resources Canada (NRCan), and MBARI are continuing their scientific collaboration with the undertaking of the 2017 Canada-Korea-USA Beaufort Sea Geoscience Research Program.

The research team, made up of scientists, engineers, and technicians from all three organizations, will be working in the southern portion of the Canadian Beaufort Sea from August 29 to September 13. The Araon is the main research vessel utilized by KOPRI for research and logistics in the Antarctic and Arctic. The Araon is a 110-meter-long icebreaker commissioned by KOPRI and launched in 2009. The scientific design of the ship is impressive with capabilities to undertake integrated multidisciplinary oceanographic, atmospheric, and marine geology studies. Priorities for the upcoming mission will include multi-channel seismic surveys, detailed bathymetric mapping, coring, and ocean and atmospheric science studies.

The research collaboration enabling this expedition was established in 2009 with a primary objective to study the geological, geophysical, and oceanographic environment of the Beaufort Sea shelf and upper slope. Our hypothesis is that shelf areas of the Arctic with water depths of less than 100 meters are underlain by permafrost and gas hydrate stability conditions that formed during past glacial periods and are only now being altered by the thermal effects of marine transgression, which may promote their degradation. These shallow shelf areas are widespread and make up nearly 32 percent of the Arctic Ocean.

Our research will allow for the assessment of the importance of Arctic shelves as past and present sources of methane for the atmosphere, and it will quantify a range of geohazard and environmental processes associated with gas migration and release.

The Beaufort Shelf is an ideal study area for a number of reasons:

We believe that research in the Beaufort Sea will contribute to the understanding of other larger Arctic shelves.

In previous research cruises (in 2003, 2010, 2012, 2013, 2016) in the Canadian Beaufort Sea, MBARI and GSC have documented the existence of methane gas release from several sites on the continental shelf and slope. Most of the venting methane gas is believed to be derived from the decomposition of permafrost or gas hydrate deposits that exist underneath the arctic continental shelf.

Past AUV and ROV surveys have also revealed the existence of an unusual concentration of distinct morphologic features including scars of large submarine landslides, isolated topographic mounds—including some associated with fluidized mud deposits, known as mud volcanoes—and the existence of glacially derived marine deposits. All these features are potential marine geohazards. The impact of submarine permafrost formation and/or degradation on the formation of these seafloor structures remains poorly understood. However, the earlier discoveries have already substantially advanced our understanding past glacial extents as well as the process that may be modifying the shape of the Arctic seafloor now.