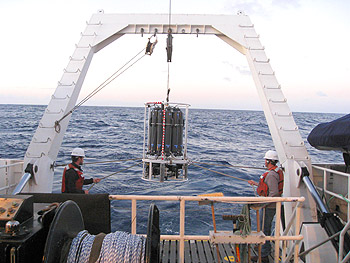 MBARI researchers Adam Monier and Martin Suro deploying a water sampler in the North Pacific. Some water samples from this area were found to contain algae in the newly discovered group of rappemonads. Image: Alexandra Worden © 2010 MBARI

A team of biologists has discovered an entirely new group of algae living in a wide variety of marine and freshwater environments. This group of algae, which the researchers dubbed “rappemonads,” have DNA that is distinctly different from that of other known algae. In fact, humans and mushrooms are more closely related to each other than rappemonads are to some other common algae (such as green algae). Based on their DNA analysis, the researchers believe that they have discovered not just a new species or genus, but a potentially large and novel group of microorganisms.

The rappemonads were found in a wide range of habitats, in both fresh and salt water, and at temperatures ranging from 52 degrees to 79 degrees Fahrenheit. According to MBARI Senior Research Technician Sebastian Sudek, co-first-author of the paper reporting the discovery of these algae, “Based on the evidence so far, I think it’s fair to say that rappemonads are likely to be found throughout many of the world’s oceans. We don’t know how common they are in fresh water, but our samples were not from unusual sources—they were from small lakes and reservoirs.”

Researchers Sebastian Sudek, Heather Wilcox, and Alexandra Worden of the Monterey Bay Aquarium Research Institute (MBARI), along with collaborators at Dalhousie University and the Natural History Museum (NHM), London, discovered these microscopic algae by following up on an unexpected DNA sequence listed in a research paper from the late 1990s. They named the newly identified group of algae “rappemonads” after Michael Rappé, a professor at the University of Hawaii who was first author of that paper.

Following up on their initial lead, the research team developed two different DNA “probes” that were designed to detect the unusual DNA sequences reported by Rappé. Using these new probes, the researchers analyzed samples collected by Worden’s group from the Northeast Pacific Ocean, the North Atlantic, the Sargasso Sea, and the Florida Straits, as well as samples collected from several freshwater sites by co-author Thomas Richards’ group at NHM. To the teams’ surprise, they discovered evidence of microscopic organisms containing the unusual DNA sequence at all five locations. 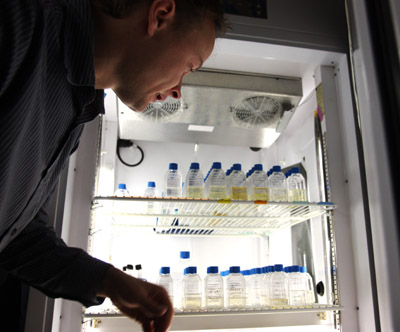 Although the rappemonads were fairly sparse in many of the samples, they appear to become quite abundant under certain conditions. For example, water samples taken from the Sargasso Sea near Bermuda in late winter appeared to have relatively high concentrations of rappemonads.

When asked why these apparently widespread algae had not been detected sooner, Sudek speculates that it may in part be due to their size. “They are too small to be noticed by people who study bigger algae such as diatoms, yet they may be filtered out by researchers who study the really small algae, known as picoplankton.”

Sudek says, “The rappemonads are just one of many microbes that we know nothing about—this makes it an exciting field in which to work.” Worden, in whose lab the research was conducted, and who first noticed the unique sequence in the 1990 paper, then initiated research to “chase down” the story behind that sequence, continues, “Right now we treat all algae as being very similar. It is as if we combined everything from mice up to humans and considered them all to have the same behaviors and influence on ecosystems. Clearly mice and humans have different behaviors and different impacts!” 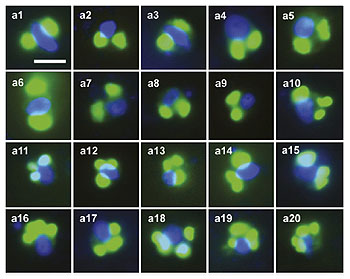 Even though DNA analysis demonstrated that rappemonads were present in their water samples, the researchers were still unable to visualize the tiny organisms because they didn’t know what physical characteristics to look for. However, by attaching fluorescent compounds to the newly developed DNA probes, and then applying these probes to intact algae cells, Eunsoo Kim at Dalhousie was able to make parts of the rappemonads glow with a greenish light. This allowed the researchers to see individual rappemonads under a microscope.

One of the primary goals of Worden’s research is to study marine algae in the context of their environment. Worden feels that such an approach is imperative to understanding how rappemonads and other microorganisms affect large-scale processes in the ocean and in the atmosphere. In coming years her lab will be building upon their recent insights, including the discovery of the rappemonads, to study the roles that different algal groups play in the cycling of carbon dioxide between the atmosphere and the ocean.

Worden says, “There is a tremendous urgency in gaining an understanding of biogeochemical cycles. Marine algae are key players in these cycles, taking up carbon dioxide from the atmosphere and releasing oxygen, which we breathe. Until we have a true census of marine algae and understanding of how each group thrives, it will be very difficult to model global biogeochemical cycles. Such modeling is essential for predicting how climate change will impact life on earth.”

Jane J. Lee contributed to the writing of this release

MBARI researchers Adam Monier and Martin Suro deploying a water sampler in the North Pacific. Some samples from these waters were found to contain algae in the newly discovered group of rappemonads. 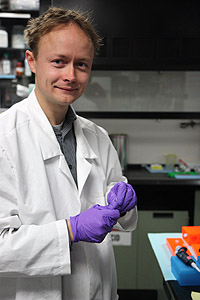 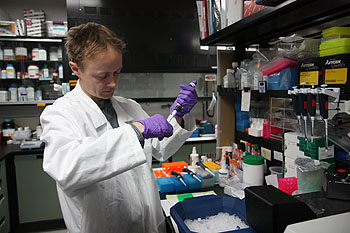 A collection of rappemonad cells photographed by a high-powered microscope. Each cell contains at least two chloroplasts (green dots) and a nucleus (blue dots).