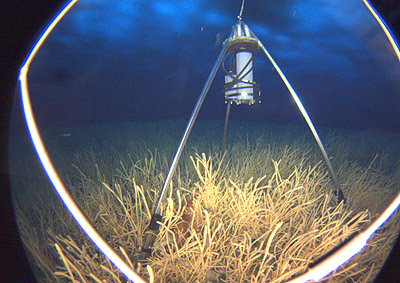 To build equipment that can operate reliably in the deep sea, MBARI engineers must often use expensive, high-tech materials and complex electronic-control systems. This makes it difficult for researchers at other institutions to build similar equipment, and thus for MBARI to fulfill its goal of sharing its technology with researchers around the world. However, MBARI engineers recently designed a new underwater camera and lighting system which they hope will be simple and inexpensive enough so that almost any researcher could build one.

The SeeStar project, as it is called, began as the brainchild of marine biologist Steve Haddock and Electrical Engineer Chad Kecy. Haddock, an expert on jellies, wanted a cheap and easily deployable camera that researchers around the world could use to document jellyfish blooms. He also wanted a system that was versatile enough to be attached to a pier, mounted on a tripod on the seafloor, or carried by a robotic submarine.

In designing SeeStar, Kecy worked closely with Mechanical Engineer François Cazenave and Software Engineer Mike Risi. They ended up with a system that costs just under $3,000 in parts, but can operate as deep as 300 meters (almost 1,000 feet) for months at a time. 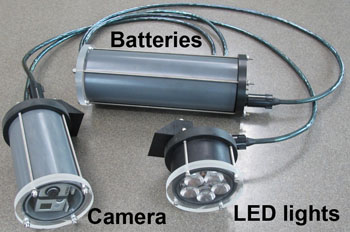 The three modules of the SeeStar System allow it to be mounted on many different platforms. Image: (c) 2013 MBARI

SeeStar has three parts—a camera, a battery pack, and LED lights—each contained in its own pressure housing. The pressure housings are made of relatively inexpensive PVC pipe with plastic end caps. Kecy said, “We tried to choose parts that you could buy at almost any hardware store—standard PVC tubing, stainless-steel rods and bolts… nothing too exotic.”

The three pressure housings are connected using commercially available flexible electrical cables. This modular construction makes SeeStar easy to attach to a variety of platforms. The team selected a camera made by GoPro because it was relatively inexpensive and easy to use. Kecy then designed a custom circuit board to control both the camera and the LED lights.

From the beginning, SeeStar was conceived as an open-source project. Kecy explained, “Our goal is to put enough information on the web for someone to build an entire system. There are written instructions, mechanical drawings, electrical schematics, circuit-board build files, and controller code up there on our website. It’s still a work in progress, but at least it’s up there… and we’ll be updating it as we improve the system.” 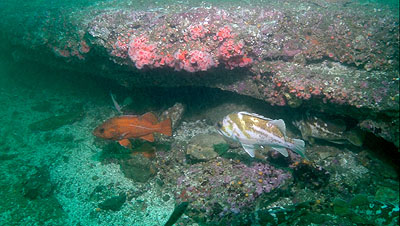 Photograph taken by SeeStar of rockfish and anemones on the seafloor of Monterey Bay. By taking many such images over time, researchers hope to be able to monitor changes in fish populations. Image: (c) 2014 MBARI

Kecy continued, “One of our biggest challenges was designing a general device that different people could use in different ways, rather than a specific device for a specific task. Doing open-source hardware required a different mindset from our normal engineering development process. We also wanted to keep costs down.”

Although SeeStar began as a system for counting jellies, it soon became apparent that the system could be used for all kinds of underwater research. By the end of 2013, other marine researchers began to hear about Kecy’s project. Soon he was being approached by a variety of organizations wanting to try out the camera.

One of the first outside groups to show interest in SeeStar was a group of researchers from the Nature Conservancy and Moss Landing Marine Laboratories (MLML), who were studying fish in Rockfish Conservation Areas along the US West Coast. As Kecy put it, “They had an existing camera system, but it was and bulky and expensive, and they were looking for one that was smaller and easier to use. They also wanted multiple cameras, which they could deploy in a number of locations simultaneously.” 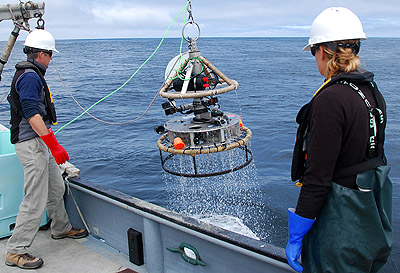 Working with Cazenave, the researchers used SeeStar to collect short videos at 12 different locations on the seafloor of Monterey Bay, about 100 meters (330 feet) below the surface. They then used these videos to identify and count different types of fish. The group is presently evaluating SeeStar cameras as a tool for monitoring marine protected areas all along the US West Coast.

Another group, the California Wetfish Producers Association, used SeeStar to photograph the eggs and larvae of market squid. These squid support one of the most economically important fisheries on the California Coast, yet many aspects of their life cycles are still unknown.

Several MBARI researchers have also used SeeStar in their research. One group attached SeeStar to an underwater robot (an autonomous underwater vehicle or AUV) so that they could observe and count jellyfish in the open ocean.

Another MBARI group used a SeeStar-equipped AUV to follow a second robotic vehicle as it traveled across the ocean surface. Video from SeeStar confirmed that the AUV was able to track the surface vehicle closely, like a white shark stalking a sea lion. A third MBARI group is using SeeStar to document wear and tear on a buoy that generates electrical power from the ocean waves.

The most ambitious SeeStar project is currently under way in Antarctica, where researchers from MLML are using two SeeStar systems to study seafloor animals under the ice near McMurdo Station. In order to deploy the camera in this challenging environment, the researchers must first drill a 25-centimeter (10-inch) hole in the ice, then lower the camera on a folding tripod through the hole and down to the seafloor. 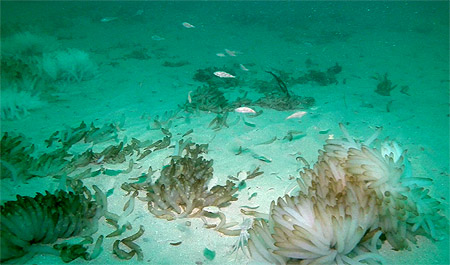 Photograph taken by SeeStar of market-squid eggs on the seafloor of Monterey Bay. Image: (c) 2014 MBARI

In December 2014, one of the Antarctic SeeStar systems successfully recorded still images of the seafloor every 20 minutes for an entire month. As of this writing, two SeeStar systems were just recovered from 200 meters (660 feet) beneath the ice. If this second deployment is successful, the team hopes to return next season to deploy SeeStar beneath the Antarctic ice for an entire year.

Even though the current version of SeeStar is relatively inexpensive, it still uses circuit boards and controllers that may be difficult for non-engineers to build. During 2015, the team will be addressing these issues in several different ways. They will investigate alternative cameras that could provide higher resolution still images and more control of exposure, as well as commercially available underwater lighting systems.

Kecy also hopes to replace his existing camera controller board with a new board that works with the popular Arduino microcontrollers. This would make the system as a whole cheaper and easier to use, as well as providing more flexibility in operating the camera. Because an Arduino camera-controller board would have many uses beyond marine research, Kecy hopes that an open-source hardware company might be willing to manufacture and sell his board on line.

Once Kecy has the Arduino controller system completed, he plans to take it to “Maker Faires” and similar hobbyist gatherings to generate interest from other potential users. This way, if the project takes off, the user community will come up with improvements of their own.

Looking back on the evolution of the SeeStar project, Kecy said, “The most satisfying thing has been getting the camera out there and having people use it. I love it when researchers come back from a deployment and see the videos and are happy with them. It’s great to make something that people not only can use, but also something they get useful results from.”

Even though it is still in development, SeeStar is already letting marine researchers see things underwater that they’ve never seen before. It’s also helping MBARI in its continuing efforts to share its high-tech tools with the rest of the world.

November 30, 2017 – MBARI has partnered with The Nature Conservancy and other organizations to design a new camera system for counting threatened rockfish.
May 19, 2015 - Scientist Steve Haddock, Electrical Engineer Chad Kecy, and Mechanical Engineer François Cazenave introduced the SeeStar camera system at the Bay Area Maker Faire, a large festival held May 16th and 17th to celebrate invention and creativity by showcasing creations that relate to science, engineering, or art.
Jan 21, 2015 - The SeeStar project is designing a cheap and easily deployable camera that researchers around the world can use to document life underwater. It is versatile enough to be attached to a pier, mounted on a tripod on the seafloor, or carried by a robotic submarine.

This project has installed a high resolution video camera in the nose cone of the autonomous underwater vehicle (AUV) named Dorado. The purpose is to conduct transects of the deep water in the Monterey Bay to identify the types and quantities of marine life that live there.
The motivation behind the development of the SeeStar camera system is to have a method of quantifying zooplankton that works without human intervention, and which can be deployed for many scientific purposes.