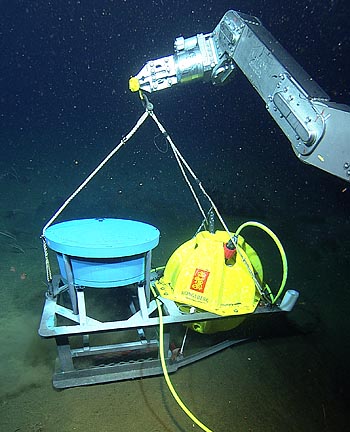 This photo shows the robotic arm on MBARI’s remotely operated vehicle (ROV) Ventana lowering the DEIMOS instrument onto the seafloor. The blue cylinder works like a fish finder, sending sound waves up from the seafloor to detect fish and other animals swimming above. Image: (c) 2009 MBARI

In late February, 2009, MBARI marine-operations staff connected two new instruments to the MARS ocean observatory in Monterey Bay. One instrument, developed by John Horne at the University of Washington, uses sound to monitor marine life. The second instrument is an ultra-sensitive earthquake detector sponsored by MBARI adjunct Barbara Romanowicz of the University of California, Berkeley.

The MARS (Monterey Accelerated Research System) observatory supplies power to these instruments and allows the researchers to run experiments and collect data from the comfort of their offices on shore. Funded by the National Science Foundation and completed in November of 2008, the MARS ocean observatory provides researchers with the equivalent of an electrical substation and Internet hookup on the deep seafloor, 900 meters (about 3,000 feet) below the surface of Monterey Bay. 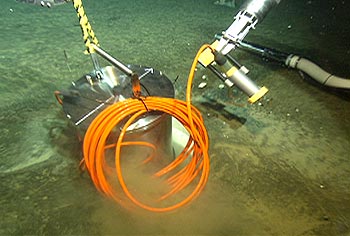 This photo shows the titanium pressure housing for the MOBB seismometer being lowered into a protective casing in the seafloor. This ultra-sensitive instrument was first installed in Monterey Bay in 2002. The seismometer operated on batteries (which had to be changed every three months) until it was hooked up to the MARS observatory in early 2009. Image: (c) 2002 MBARI

The latest instrument to be installed on the MARS observatory is DEIMOS, the Deep Echo-Integrating Marine Observatory System. This innovative system works like the “fish finder” used on many recreational fishing boats, but instead of pointing down from the sea surface, it points up from the seafloor.

Like other fish finders, DEIMOS sends brief pulses of sound into the water and analyzes the echoes that bounce back from objects in the water column. Such objects include a variety of animals, from 2-cm-long krill to blue whales. Needless to say, the researchers designed DEIMOS so that its sounds do not disturb marine mammals or other animals that they are trying to monitor.

Data from DEIMOS will help Horne and other researchers understand how animals in the open ocean respond to tides, upwelling events, storms, and even long-term processes such as El Niño events. Previous versions of this device could only be deployed in the deep ocean for a week or two until their batteries ran out. With a continuous power supply from the MARS observatory, DEIMOS could operate unattended for years. However, the current test installation is scheduled to run until Fall, 2009.

Listening to rumblings in the seafloor 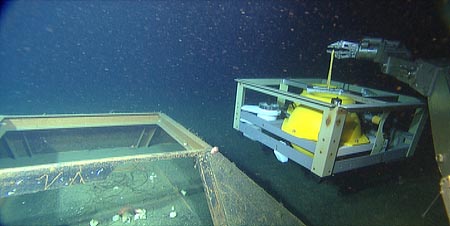 Earthquake scientists in Central California face a dilemma. Some of the most important faults in this area run along or just offshore of the coast. However, until recently, all of the seismometers (earthquake detectors) were located on land. Because of this situation, geologists can’t get as much information as they would like about offshore rock formations or earthquakes.

The Monterey Ocean-Bottom Broadband (MOBB) seismometer, installed in the seafloor of Monterey Bay in 2002, was designed to help address this problem. A joint project between MBARI and the Berkeley Seismological Laboratory at the University of California, Berkeley, this ultra-sensitive earthquake detector has been collecting data for over seven years. However, until this year, the data could only be brought back to shore every three months, when the instrument’s batteries were changed by one of MBARI’s robot submarines.

This “after-the-fact” earthquake data still turned out to be very useful. For example, Romanowicz and her fellow researchers learned how to “clean up” the seismometer’s signal by filtering out vibrations from ocean waves and currents. Ironically, the data showing vibrations from ocean waves helped the researchers solve a longstanding mystery about the Earth’s “low-frequency hum”. However, these belated data did not help researchers detect, understand, and respond to ongoing earthquakes.

What’s next for MARS

Although the MOBB seismometer will remain hooked up to the MARS observatory for at least five years, most experiments will be hooked up for only a few months. The observatory is primarily intended as a testing site for equipment that could be used at other deep-sea observatories around the United States.

Since its completion last year, the MARS observatory has already supported a low-light video camera to track seafloor animals and an experiment to test the effects of increasing ocean acidity on marine life. As of March 2009, both of these experiments are back being reconfigured on shore. But they will be hooked to the observatory later this year for further testing. Other pilot experiments are planned for the next six months, including a robotic DNA lab and a robot that crawls along the seafloor, collecting data on animals that live in the mud.

With all the new experiments being hooked up to the MARS observatory, marine researchers are learning how to work with all the data they are receiving. They are also looking forward to comparing information from the different experiments, to obtain an even more detailed understanding of physical processes and life in the deep sea. 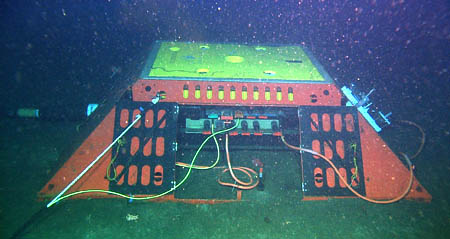 This photo shows the hub of the MARS observatory, the “main science node,” 900 meters below the ocean surface in Monterey Bay. The yellow cable extending to the lower left corner of the image carries data and power for the MOBB seismometer. The main MARS cable to shore is faintly visible at the middle left. Image: (c) 2009 MBARI