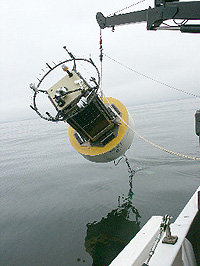 Over the last twenty years, marine biologists have become increasingly aware that plants and animals in the open ocean are intimately related to ocean “weather”—changes in ocean currents and circulation patterns. For example, to fully understand the behavior of sea birds or whales in Monterey Bay, scientists need to first understand the process of upwelling, which brings deep, nutrient-rich water toward the surface. This water nourishes tiny marine plants (phytoplankton) that support many of the bay’s food webs. On June 3, 2004, MBARI operations staff deployed a new oceanographic mooring in Monterey Bay that is designed specifically to monitor the the physical, chemical, and biological effects of upwelling.

This new mooring is a joint effort between MBARI and the Center for Integrated Marine Technologies (CIMT) at the University of California, Santa Cruz. One of the main goals of the CIMT “Wind to Whales” program is to “understand the processes underlying coastal upwelling along the California coast using an interdisciplinary approach and innovative technology.”

At a basic level, upwelling in the bay can be described quite simply: When strong northwest winds blow along the coast, they move surface waters offshore, allowing cold, nutrient-rich water to rise from the depths (see illustration). These nutrients (particularly nitrate and iron) cause rapid increases in populations of phytoplankton. The phytoplankton are consumed by tiny marine animals (zooplankton) as well as larger animals such as anchovies and krill, which in turn provide food for larger animals such as whales, sea birds, and salmon. But the entire food web ultimately depends on upwelling. 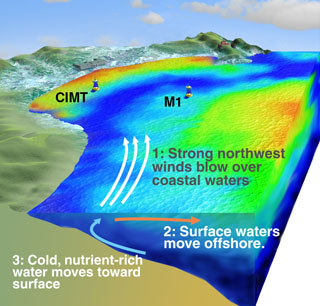 The new mooring is located about eight kilometers offshore of the Pajaro River, in about 75 meters of water. “We used satellite images to choose an area where the phytoplankton blooms reach maximum levels” explains MBARI scientist Francisco Chavez, who has been studying upwelling in the bay for over a decade. Chavez serves as MBARI’s liaison with the CIMT program. He notes that “this mooring is a useful addition to the array of monitoring stations in the bay. It is a great opportunity to test new technology developed at MBARI, as well as to provide more complete data for the overall research community.”

The CIMT program is truly a community effort, funded by the National Oceanic and Atmospheric Administration (NOAA) and administered by the University of California at Santa Cruz. Other participating institutions include the National Marine Fisheries Service, Moss Landing Marine Laboratories, the Naval Postgraduate School, and the Monterey Bay National Marine Sanctuary. Since 2002, the CIMT program has been collecting data on the bay using a variety of high-tech tools. Satellite imagery provides regional views of water temperatures and chlorophyll concentrations (which indicate the abundance of phytoplankton). Special radar arrays map surface currents several times a day. Semi-monthly shipboard surveys allow researchers to collect chemical data and count animals such as seabirds, sea turtles, and marine mammals.

Satellites and radar are great for showing large areas of the ocean surface but they cannot penetrate to show subsurface processes that are a critical part of the upwelling system. The new CIMT mooring collects both surface and subsurface data using an impressive variety of scientific sensors, and relays the data to shore continuously, 24 hours a day. The sensors on the mooring were chosen specifically to document key elements of the upwelling process. The following paragraphs summarize each of the main steps in upwelling and bloom formation, as well as mooring sensors used to monitor each step.

Northwest Winds: The driving force behind upwelling is the strong northwest wind that often sweeps the Central California coast during spring and summer. The new CIMT mooring measures wind direction and speed as well as other basic weather conditions such as air temperature and humidity. But it also measures less familiar parameters such as carbon dioxide and oxygen concentrations above and below the water surface. Since phytoplankton consume carbon dioxide and release oxygen as they grow, they can have significant effects on concentrations of these gasses. Like land plants, phytoplankton also need adequate sunlight to grow. The new mooring includes extremely sensitive instruments (hyperspectral radiometers) that measure the amount of sunlight available for phytoplankton at various depths.

Upwelling of deep waters: The next step in the upwelling process occurs when warm surface water moves offshore and cold, nutrient-rich water moves up toward the sea surface. The CIMT mooring includes two instruments to help detect such water movements. Temperature and salinity probes are strung along the mooring cable at various depths to help identify the passage of different water masses. Currents are measured using “doppler current meters,” which bounce sound waves off small particles suspended in the water column. 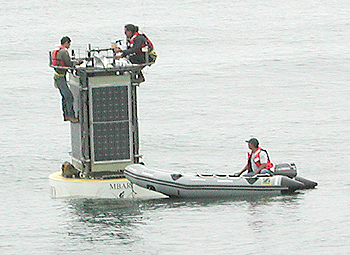 Increases in animal populations: The results of upwelling don’t end with phytoplankton blooms, but continue when the phytoplankton are consumed by zooplankton and other animals. The CIMT mooring cannot measure zooplankton populations directly, but scientists can estimate their abundance and track their daily vertical migrations by studying the strength of reflected sound pulses received by the doppler current meters described above.

Unfortunately, zooplankton are the largest animals that can currently be “detected” by the CIMT mooring’s instruments. Larger animals, such as marine mammals, must currently be observed by humans during CIMT ship cruises or tracked using radio transmitters.

The CIMT mooring is a logical extension of MBARI’s two other oceanographic moorings: M1, near the mouth of the bay, and M2, which is located about 35 miles offshore. These moorings carry similar sensors, but MBARI engineers have redesigned the the software and hardware for the CIMT mooring so that new instruments can be added in a “plug and play” fashion, without reconfiguring the rest of the mooring. MBARI has also set up a special data-processing system to automatically store and distribute data from the CIMT mooring. The engineering and design of the new mooring was coordinated by MBARI engineer Kent Headley, who managed to complete the project on a very tight time schedule. The CIMT buoy uses a similar design to the MOOS test mooring that MBARI deployed in April 2004, but with a standard rope and chain mooring cable. Both are test platforms for cutting-edge oceanographic technology that will eventually become part of ocean observatories in Monterey Bay and elsewhere.

The new CIMT mooring will be left in place for at least two years. After that its fate will depend on how well it has performed, and whether funding sources are available to keep it afloat. Given recent national and international interest in the health of the oceans, new coastal monitoring programs are being developed that could eventually lead to arrays of such moorings being deployed along the California coast. This would add another dimension to our understanding of ocean weather and its effect on plants and animals in the sea.