MOSS LANDING, California— Using the Environmental Sample Processor (ESP), the first in a new class of oceanographic research instrumentation, a team of MBARI scientists and engineers detected the onset and development of a harmful algal bloom (HAB). The ESP was deployed in May as part of an ongoing, multi-institution research effort in the Gulf of Maine aimed at understanding the growth, transport, and decay of toxic blooms which can adversely affect the health of humans and wildlife. The toxic dinoflagellate, Alexandrium fundyense, was detected during the experiment at low densities of approximately 100 cells per liter of seawater. 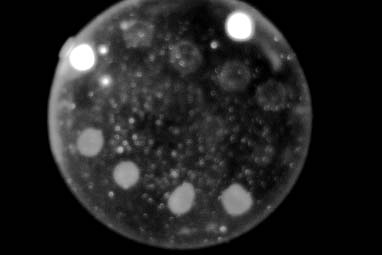 The ESP was developed at the Monterey Bay Aquarium Research Institute (MBARI) and is designed to autonomously collect discrete subsurface water samples and concentrate microorganisms contained within those samples onto filter disks. The ESP automates application of preservatives as well as DNA and other molecular probes to the collected samples to enable identification and quantification of particular species captured. In addition to archiving discrete samples for microscopy and nucleic acid and toxin analyses, the instrument also transmits results of probe assays in real-time to a remote location for data processing and interpretation. This capability provides an entirely new means of remotely detecting microorganisms in the environment, enabling water quality assessments in the absence of ship-based sample collection and time-consuming laboratory analysis.

The ESP is the result of four years of teamwork between MBARI scientists and engineers, under the leadership of Chris Scholin and Gene Massion. Although the current instrument is targeted at HAB research and issues related to the health of humans and marine wildlife, it is capable of emulating a wide variety of water quality measurements.

“The exciting results from the Gulf of Maine experiment are the culmination of four years of effort at MBARI in developing the capability for in situ detection of microorganisms in the marine environment using genetic probes,” said Marcia McNutt, MBARI president and CEO. “The fantastic teamwork between MBARI scientists and engineers was instrumental in harnessing a new technology to address a fundamental problem in marine research that also has important implications for human health. We are optimistic that the ESP will usher in a new era in our ability to understand the ecology of the microscopic life in the oceans.” 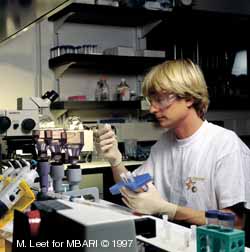 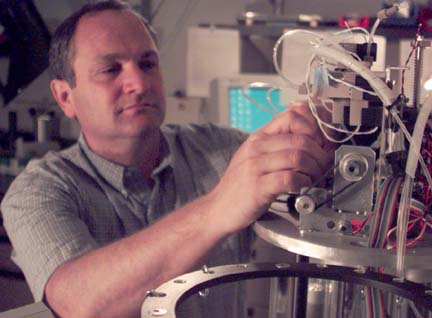 The Environmental Sample Processor (ESP), top, which is enclosed in a housing for deployment at right. Photo: (c) 2000 MBARI.