New device helps oceanographers get their instruments back from the depths 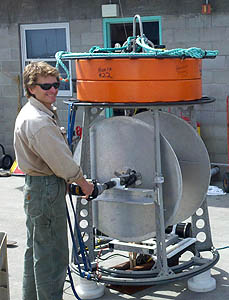 Getting heavy objects down to the seafloor is pretty easy—in a best-case scenario, you just drop them over the side of a ship, and hope that they land right side up on the ocean bottom. However, getting those same objects back to the surface can be problematic. MBARI Marine Operations Technician Mike Conway recently developed a new device called a “line elevator” that will make this process easier. One result will be fewer anchors and other heavy objects sitting on the seafloor of Monterey Bay.

When NASA sends space probes to the moon or Mars, these multi-million-dollar probes don’t usually come back. They are considered disposable. In most cases, oceanographers do not have that “luxury.” For one thing, seawater blocks most radio waves, so most oceanographic instruments have to be brought back to the surface before scientists can download the data they have collected.

Unfortunately, attaching a line from a ship to an instrument 900 meters (3,000 feet) below is a tricky business. At that depth, you can’t simply lower a line and hope to snag the instrument. And you can’t send an ROV down with a line because of the danger that the ROV’s control tether could get tangled in the line. 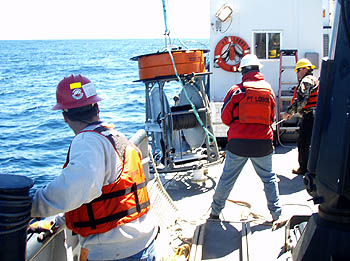 This process seems straightforward, but is fraught with risks. Both the number of floats and the weight the instrument have to be very carefully balanced, or the instrument will refuse to sink, or (worse yet) refuse to rise back to the surface. Another challenge is that the ocean is a surprisingly noisy place, so acoustic releases don’t always release or may be released accidentally. Even after the instrument reaches the surface, it can be very difficult to locate in the open ocean, particularly in rough conditions.

To address these issues, in 2005 MBARI partnered with the Monterey Bay National Marine Sanctuary to open a design competition for an environmentally-friendly anchor system. More than a dozen entries were received from across the United States, including one from a 16-year-old high school student. In the end, two conceptual designs won awards. However, at the time of the contest, neither of these had actually been built or tested in the ocean.

Over the last year, Mike Conway has been addressing a related task—how to get heavy instruments back to the surface without the use of cumbersome floats and drop weights. Conway’s system is called a “line elevator,” because its key element is a platform that can descend into the ocean bottom to deliver a spool of line, and then rise back to the surface to bring the free end of the line back to a ship.

Conway was able to build this device quickly and cheaply by using the frame of an older elevator used to lift heavy sediment cores to the surface. In between his other projects at MBARI, he somehow found time to design and fabricate all the additional parts he needed. 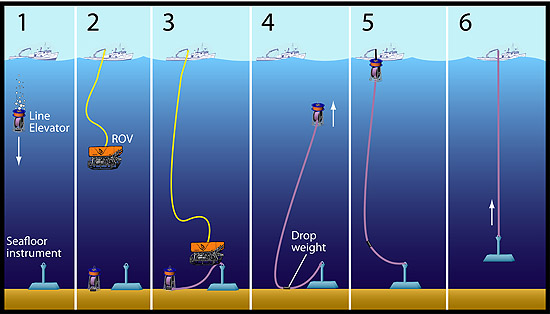 This illustration summarizes the steps involved in using the line elevator to lift equipment up from the deep seafloor (not to scale). Image: Kim Fulton-Bennett © 2011 MBARI

In April 2011, Conway finally got a chance to test his new system in the open ocean. The line elevator worked just as he had hoped, allowing MBARI researchers to lift two heavy instrument stands (“benthic instrument nodes”) from the bottom of Monterey Canyon.

In addition to providing a new tool to help keep the floor of Monterey Bay free of unused equipment, the line elevator provides another advantage for marine operations crews. When it reaches the sea surface, the line elevator will not drift with the currents because its drop weight acts as an anchor.

Conway hopes that the advantage of not having to chase instruments around the bay, combined with the environmental benefits of keeping the seafloor clean, will more than make up for the extra gear involved in using the line elevator.

Conway is optimistic that the new line elevator will be a useful tool for MBARI’s marine operations crews, helping them recover heavy instruments from the deep sea. “The ROV pilots have assured me that we’ll have a lot of opportunities to use this,” he says. “The gear we’re putting out there keeps getting bigger.”

Mar 23, 2015 - On March 17, MBARI's research vessel Western Flyer returned to the dock in La Paz after a two-week midwater-biology cruise. While the ship was at the dock, researcher Steve Haddock and ROV Pilot Randy Prickett dove underneath the boat to clear a line that had become wrapped around part of the boat. The ROV pilots spotted the offending line during an ROV launch when visibility was particularly good.
Oct 10, 2014 – MBARI researchers aboard the R/V Rachel Carson discovered an apparently old, large jet engine in Monterey Bay while conducting a seafloor survey 17 miles from Moss Landing, California. During the survey, remotely operated vehicle (ROV) pilot Mike Burczynski observed a large sonar signal.
Jul 10, 2014 – Using maps produced by the AUV, MBARI researchers on the Western Flyer have identified hundreds of hard surfaces on the seafloor south of Santa Cruz Island. With the ROV Doc Ricketts, researchers can visually confirm and identify these objects, many of them man-made.