Why study the midwater and what the heck is OMZ?

We use this term “midwater” to describe the community of organisms that live in the pelagic zone. The pelagic zone can be described as any water that is neither close to the bottom nor near the shore. Most people know that the ocean covers about 70 percent of the earth’s surface, but when you take into account how deep the ocean is, you realize that this pelagic zone is a huge volume. As a result, the pelagic zone is the largest habitat on earth. Let me say that again—the largest habitat on earth! There is still so little we know about the organisms that live in the pelagic zone—from microscopic bacteria and phytoplankton to gigantic whales, squid, and gelatinous animals (to name just a few). MBARI’s midwater lab, led by Bruce Robison, is one of the few groups in the world that focus their research on the macrofauna (those we can see with the naked eye) that live in the midwater.

One of the group’s areas of interest is a layer within the midwater called the oxygen minimum zone (OMZ). The OMZ is a layer where the oxygen levels are lower than that above or below. This layer usually exists in the eastern boundary of an ocean basin (like the west coasts of North and South America) where wind-driven motion causes upwelling. The nutrients brought to the surface by this upwelling causes phytoplankton to thrive near the sea surface. The phytoplankton add oxygen to the surface layers as does the mixing of air between the ocean and the atmosphere. This makes the surface waters relatively oxygen rich. Phytoplankton complete their life cycles, die, and sink down from the surface layers. Zooplankton and larger animals produce fecal material and die. All of this dead and dying material sinking through the water column is called marine snow (and it really looks like snow falling through the sky.). As the marine snow sinks, it is consumed by bacteria. The bacteria use oxygen to break down the marine snow, causing this deeper water to be depleted of oxygen. Deeper in the water column, much of this microbial breakdown has already happened, so the oxygen levels rise again where there is less consumption of particles and therefore, less consumption of oxygen.

The white dots in this image are marine snow sinking through the water column.

As the ocean warms, OMZs are expanding. (I’ll talk about why OMZs are expanding tomorrow.) It is important to understand how animals that live in the OMZ will be affected by the expansion. More importantly, what will be the effect on animals that would not be able to survive in an oxygen-poor environment? Will they be pushed shallower or deeper to find more oxygen-rich water? Will they leave certain areas altogether and only thrive where OMZs don’t exist? Will some animals become extinct? How will this affect fisheries and, therefore, economies built around fisheries? All of these questions will be a challenge to answer. By studying the midwater and the OMZ over the last 25 years, the midwater lab can make observations about how communities have changed in response to lower oxygen levels. Over the next week, we’ll describe how we study these questions.

Thanks for sticking it out and reading my primer on midwater ecology and the OMZ. As a reward for your persistence and thirst for knowledge, I’ll share some photos of an amazing feeding event we witnessed on the way to our first station today. Humpback whales, sea lions, and sea birds were amidst a feeding frenzy just a few miles offshore of Moss Landing. The past few months in Monterey Bay have brought the best whale watching in recent memory. 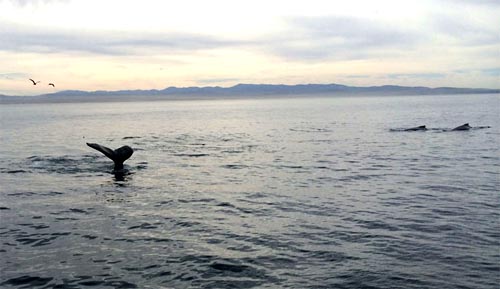 A humpback whale shows its fluke as it dives for another gulp of food. The dorsal fins of two more humpback whales can be seen to the right with the southern coast of Monterey Bay in the distance.

Watch this video of the sea lion raft and humpback whale feeding event. Be sure to watch with the sound on.

Question: Now you know why Monterey Bay is such a great place for whales, right?

Answer: Upwelling! Nutrients brought to the surface by upwelling cause phytoplankton to bloom and the success continues right on up the food web to the whales. 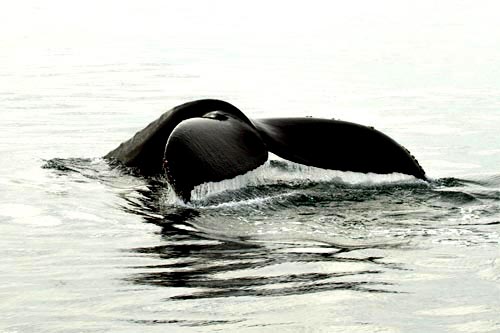 A humpback whale shows its fluke as it dives. Photo: Knute Brekke. 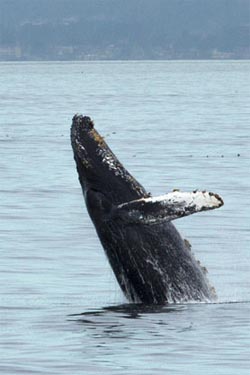 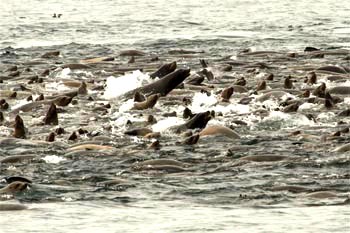 Sea lion raft close up. There were likely hundreds of sea lions making up this raft. Photo: Knute Brekke. 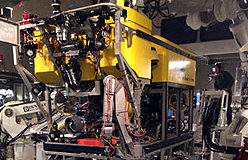 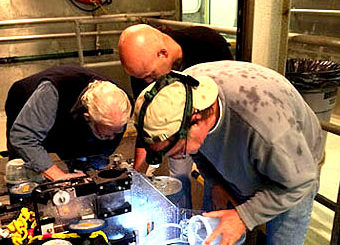