Today we started the day by conducting midwater transects. The midwater lab has done this regularly for the last 16 years. The ROV flies at a steady velocity in 10-minute intervals, from 100 meters (325 feet) down to 1,000 meters (3,250 feet). The long-term time series allows the lab to look at changes in the mesopelagic community over time and depth.

When we completed the transects, we descended to a rock where we’ve found brooding octopus in the past. This time we didn’t see any brooding individuals, but we did see a few crawling around the rock. 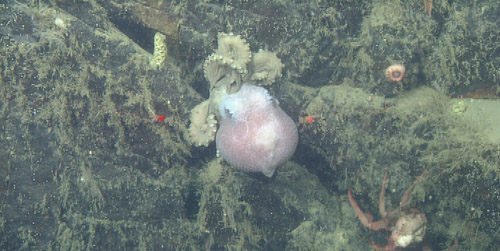 This Graneledone boreopacifica was observed on the rock where other individuals of that species were found brooding eggs over many months.

After we surveyed the “octopus rock”, we ascended quickly to 900 meters (3,000 feet) to search for squids. The ROV slowly yo-yoed between 900 and 400 meters (3,000 and 1,300 feet). We saw many interesting squids such as this Histioteuthis heteropsis, which our colleagues from the Monterey Bay Aquarium are interested in displaying in a future cephalopod exhibit. 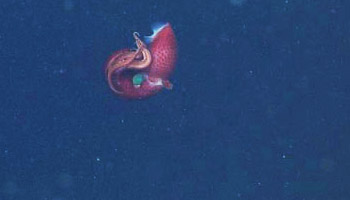 Histioteuthis heteropsis is also called the ‘cockeyed’ squid because it has two different sized eyes.

We also collected this juvenile Chiroteuthis calyx. Alicia Bitondo is studying how the structural features of this squid change with each developmental stage and how that affects their ecology. 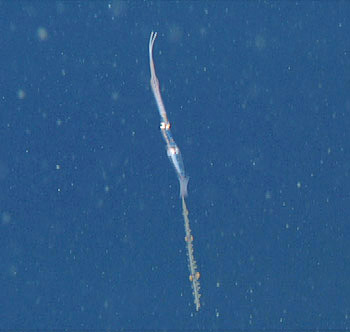 In the image, you can see the long tail on the juvenile Chiroteuthis calyx (at the bottom of the animal). The tail is the inspiration for this species’ common name, the swordtail squid. 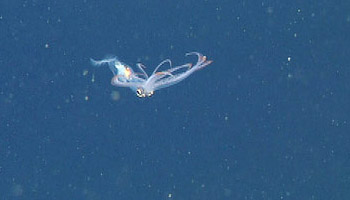 The tail is lost in adult Chiroteuthis calyx, as you can see in this image. 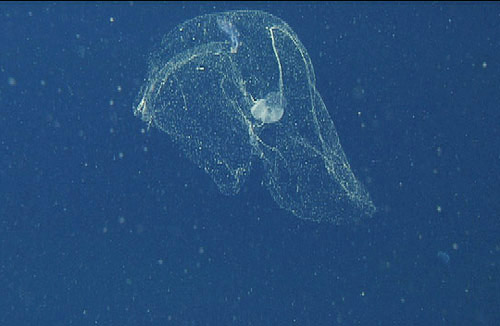 The house of Bathochordaeus can be as large as 1 meter (3 feet) wide even though the animal itself is only about 3-5 centimeters (1-2 inches) long on average!

Once we recovered the ROV, the science team busily processed their samples. After dinner, the ROV pilots and crew prepared for a second quick dive to recover a beacon that was deployed earlier this week for testing purposes. It was a long day and we look forward to another one tomorrow! 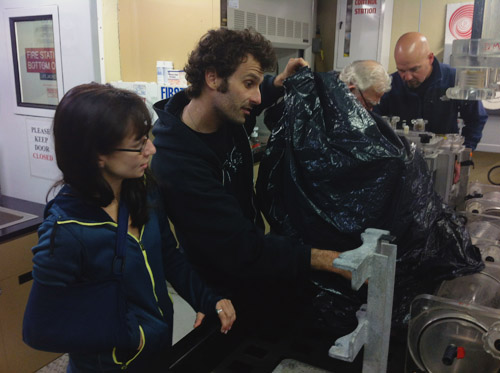