Last night we bid adieu to Henk-Jan Hoving, Bret Grasse, and Lisa Uttal, and welcomed Paul Clarkson and Chris Payne, both from the Monterey Bay Aquarium. We brought the Western Flyer in towards Moss Landing and launched our rigid hull inflatable boat (RHIB) to transfer the crew to and from shore. 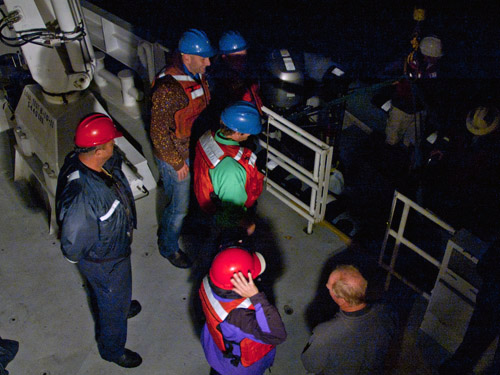 Henk-Jan Hoving, Bret Grasse, and Lisa Uttal prepare for an at-sea departure from the Western Flyer.

Following the transfer, we moved offshore to our 3,000-meters (9,840-feet) site where another Midwater Respirometry System (MRS) mooring was deployed last year. The goal for today’s dive was to launch the remotely operated vehicle (ROV) with the MRS tray and dive down to the mooring. Since this was the first time that we visited the mooring since it was deployed, we flew the ROV to the mooring and took some images of the upper floats and the lower anchor setup. We then filled up the MRS tray and left it on the mooring at 2,700 meters (8,850 feet) for a 24-hour experiment. We were hoping for a 48-hour duration, but winds are predicted to come up by Saturday, so we will come back and pick it up on Friday. We finished the dive by collecting a variety of organisms on the way back up to the surface. 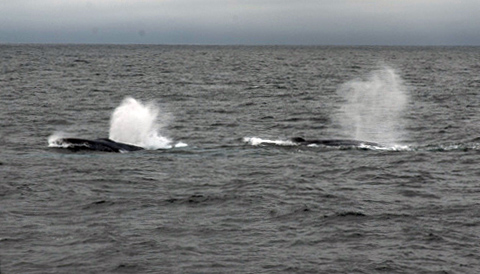 Today we were visited by some humpback whales that appeared to be feeding on the surface.

Two different experiments that have been mentioned in previous posts deserve some more explanation:

The Midwater Respirometry System (MRS) enables us to measure the oxygen consumption rates of midwater animals in order to determine the physiological effects of declining oxygen concentrations in their environment. Oxygen uptake data from the MRS and from laboratory respirometers indicate the oxygen concentrations at which each species shifts from regulation to compensation. In other words, they tell us the critical point at which further decreases in environmental oxygen may cause a species to relocate in order to find enough oxygen for survival. When we couple the critical oxygen concentration levels for each species with the oxygen profiles we measure on each ROV dive, we see correlations that explain the changing vertical distribution patterns of midwater species. 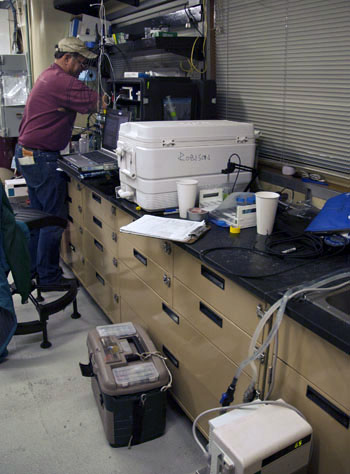 Kim Reisenbichler working on the laboratory respirometry setup on board the Western Flyer.

The automated camera system is deployed from the research vessel and suspended from the surface at a predetermined depth. Henk-Jan has been experimenting with different lighting setups and different types of lures, baits, and attractants. During this cruise, the camera system was deployed with red LED lights, a blue lure, and a bait package on Monday night, and just the lights and the lure on Tuesday night. The results from these deployments are still being analyzed, but we do have an image from an earlier deployment showing Nanomia—a common siphonophore found in the Pacific Ocean. 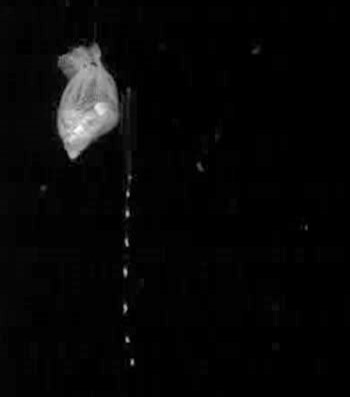 Nanomia caught with the automated camera system. (There is a bait bag hanging to the left of the siphonophore.) 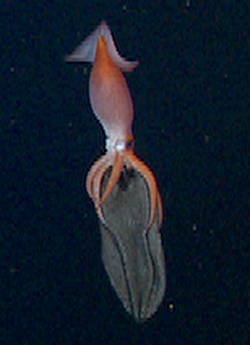 A brooding midwater squid—Gonatus with her egg sac.