Tuesday morning was a bit dark when we got started! The camera system we launched at midnight survived the night and was lifted on board by 6:00 a.m. You can check the cruise logs later this week to learn what we find on that video. Kim Reisenbichler and the remotely operated vehicle (ROV) pilots installed the Midwater Respirometry System (MRS) on the ROV last night and spent the early morning fine-tuning the installation. 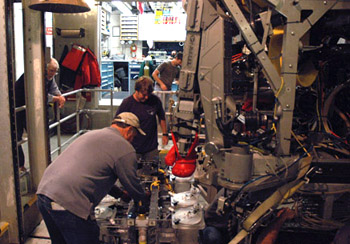 Once the ROV entered the water, it was clear that we had timed the dive perfectly. I would call it a target-rich environment with animals all around. The preferred organism for today’s experiment was a midwater crustacean called Sergestes. We were quickly able to fill up the MRS with six specimens, load up two samplers with water as experimental controls, and then deposit the MRS for a 24-hour experiment at the mooring in Monterey Canyon that was installed specifically for that purpose. We will return tomorrow morning to pick it back up. 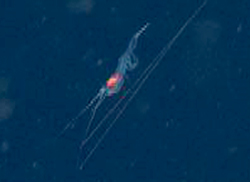 The subject of today’s MRS experiment, a midwater Sergestes shrimp.

Following the MRS deployment, we started looking for the vampire squid (Vampyroteuthis infernalis) but didn’t find any yet. We have seen many other squids including enormous numbers of the Humboldt squid (Dosidicus gigas) and the swordtail squid (Chiroteuthis calyx). We will continue our quest into the evening with a recovery scheduled for 6:30 p.m. Following that, we will launch the midwater trawl once again, as yesterday’s haul was very useful to several of the researchers on board. 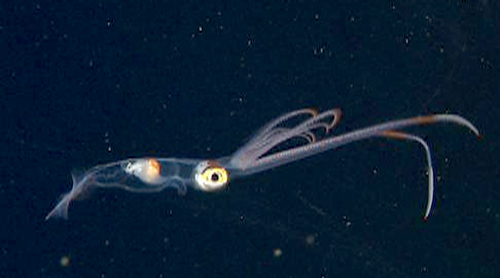