Yesterday evening was a very busy night for the scientists after recovering the contents of the trawling net. The scientists needed to sort their species of interest out of several liters of water full of all kinds of animals that had been collected in the net. Then they needed to store all their samples either alive, frozen, or after “fixing” them with a preservative such as formalin or ethanol. It takes quite a bit of organization since all the scientists are in the wet lab at the same time trying to process their animals as soon as possible. When taking a sample, they need to make sure they label the specimen properly with date, depth, and other information. We collected a lot of very interesting animals such as squids and amphipods from the trawl. We also got a lot of krill. We put some of them alive with our captive Chiroteuthis calyx squid to see if he could feed on them, and we froze the rest of them for future feeding. 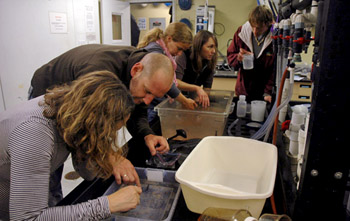 This morning, as usual, we started our dive at 6:30 a.m. and began searching for animals and testing some LED lights we plan to use on an autonomous underwater vehicle (AUV) in the future. While descending, we found several very interesting species such as the Bathophilus fish below which has never before been observed during a remotely operated vehicle (ROV) dive! 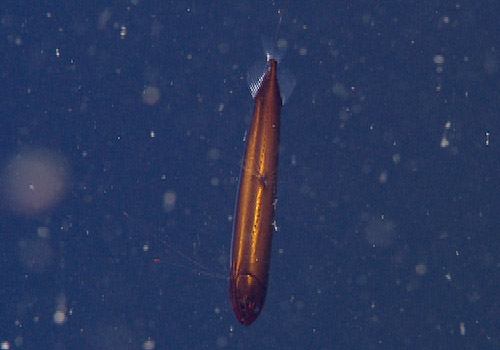 The ROV descended to the ocean floor at a depth of 1,411 meters (3,750 feet) and we spent some time observing a rock outcrop. We could see crabs, sea stars, sponges, and much more. We used the ROV’s mechanical arm to collect an egg case from the snail, Neptunea. This egg case is like a small tower, and is composed of many small eggs, each of them containing a juvenile. 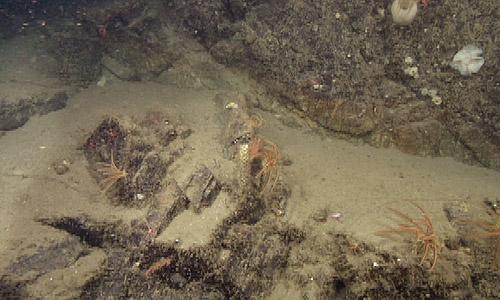 In the middle of the frame there is a yellowish, sediment-covered tower of eggs made by the snail, Neptunea.

As you may have realized by now, one focus of this cruise is catching squids and cephalopods for our sister institute, the Monterey Bay Aquarium. Here is how Bret Grasse describes his mission during this cruise:

Hello, my name is Bret Grasse. I am an aquarist (aquarium biologist) at the Monterey Bay Aquarium. My job is to highlight and display a wide variety of marine organisms by providing the best possible conditions for each individual in captivity. I specifically specialize in tropical systems and cephalopods.

In 2014, the Monterey Bay Aquarium will be opening the first ever large-scale cephalopod gallery in the U.S. They have asked me to participate on this Western Flyer trip in order to investigate the feasibility of bringing a live deep-sea component to that show. My role aboard this cruise is to investigate and improve capture, transport, and holding techniques of these highly sensitive deep-sea cephalopods. We will be testing stress-reducing capture/transport methods, improved feeding techniques, and investigating long-term holding of these animals. The three target species are Vampyroteuthis, Grimpoteuthis, and Graneledone, although we will opportunistically explore other species.

At 3:00 p.m. the ROV was back on deck. We stored the collected animals while the pilots were preparing the ROV for the next dive. While waiting for the second dive, we saw several humpback whales around the ship. 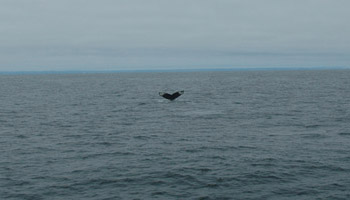 During the second dive we went down to the mooring where we left the Midwater Respirometry System (MRS) on Day 1, and retrieved it. The data from the respirometer will now be downloaded and processed by Kim Reisenbichler.

As you may recall, we launched a camera on our first night at sea to observe squid behavior. Today, using the ROV, we hung the same system on the mooring at a depth of 236 meters (774 feet). In the photo below, Henk-Jan Hoving places a frozen fish and a blue light as a lure just in front of the camera to attract the animals. 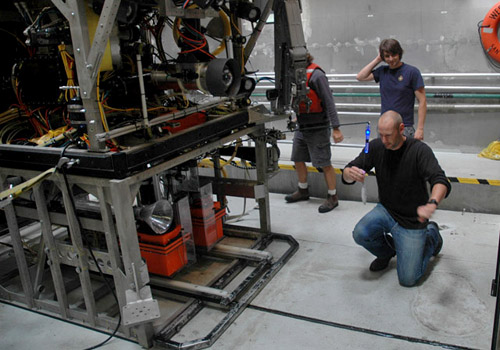