Midgets and giants in the deep sea

How is the deep sea like a desert island? It sounds like a child’s riddle, but it’s actually a serious scientific question with implications for both terrestrial and marine biology. Biologists have long observed that when animals colonize and evolve on isolated islands, small animals tend to become larger while large animals tend to become smaller. Recent research led by MBARI postdoctoral fellow Craig McClain suggests that a similar trend affects animals as they adapt to life in the deep sea. McClain will present a summary of these findings today at the 11th International Deep-Sea Biology Symposium in Southampton, England. A full article is in press in the peer-reviewed Journal of Biogeography.

Biologists ever since Charles Darwin have noted that when animals colonize an isolated island, after millions of years they may evolve into entirely new species that look very different from the original colonizers. For example, a population of mammoths isolated on the Channel Islands of Southern California developed into a new species that weighed only one tenth as much as their relatives on the mainland. Conversely, on some Caribbean islands, tiny shrews evolved into 30-centimeter-long (1-foot-long) “monsters.” As these examples illustrate, small animals on islands often grow larger, while large animals become smaller. 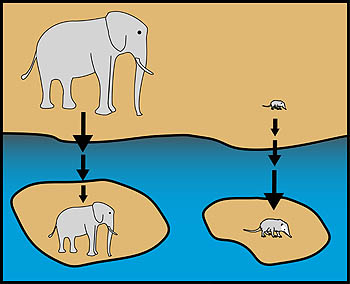 This drawing illustrates how large animals, such as elephants, may become smaller after being isolated on islands, whereas relatively small animals, such as shrews, sometimes evolve into larger species. Image: (c) 2006 MBARI

Over the last few decades, this general trend (small animals get larger and large animals get smaller) has become known as the “island rule.” However, scientists are still debating the rule’s applicability and especially its possible causes. For example, animals colonizing an island might struggle to survive in a smaller habitat with limited food, but they might also benefit from fewer predators and less competition for food. All of these factors could influence how an animal’s body size evolves over long periods of time.

As a marine biologist, McClain has long been fascinated by deep-sea animals that have evolved into forms much larger or smaller than their shallow-water relatives. However, in looking through the scientific literature, he found contradicting observations and explanations for how these deep-sea midgets and giants could have evolved. Island-colonization studies seemed to offer a useful analogy, since the deep sea has been periodically colonized by animals from shallow water, just as islands are colonized by mainland animals. 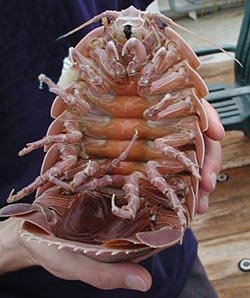 This giant deep-sea isopod is an example of an animal that has evolved to a much larger size in deeper water. These isopods are distant relatives of the tiny “pill bugs” found in many gardens. They are also related to small shallow-water isopods that live in tide pools.
Image: NOAA

In order to test the general applicability of the “island rule” to deep-sea animals, McClain and his coauthors, Alison Boyer and Gary Rosenberg, compared the sizes of marine snails in shallow and deep marine areas. Their overall goal was to compare the sizes of deep-water snails and their close relatives (other species within the same genus) in shallow water. To obtain enough data for statistical analysis, the researchers analyzed information on thousands of Atlantic marine snails, using a database Rosenberg created.

The scientists used three different statistical methods to compare the sizes of snails living in deep (below 200 meters depth) and shallow (less than 200 meters depth) ocean areas. All three methods showed a statistically significant difference in size between deep and shallow snails. Specifically, shallow-water snails less than about 12 millimeters (1/2 inch) long tended to have larger deep-water relatives, while shallow-water snails larger than 20 millimeters (3/4 inch) tended to have smaller relatives in the deep sea. As McClain put it, “These snails seem to be evolving toward a particular size that represents a compromise between different selection pressures.” 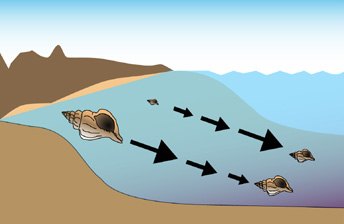 Overall, the results of this analysis suggest that snails adapting to life in the deep sea follow similar evolutionary trends as animals adapting to life on isolated islands. However, there is a lot of variation among individual species (both on islands and in the deep sea) because some species have unique lifestyles that create additional evolutionary pressures on body size. In addition, some of the evolutionary pressures proposed for islands may not apply in the deep sea. For example, the researchers point out that deep-sea snails are not likely to experience reduced habitat, predation, or competition compared with their shallow-water relatives.

Food, however, is definitely a limiting factor in the deep sea, with less food being available in deeper water and at greater distances from shore. Thus, McClain and his coauthors hypothesize that large snails evolved into smaller ones because the larger animals could not find enough food. On the other hand, tiny snails may have become larger in the deep sea because this gave them the ability to travel farther across the sea floor to look for food and to store surplus food when it was available.

Previous size studies of marine animals yielded contradictory results, some demonstrating a trend toward larger animals at greater depths and others showing smaller animals in deeper water. In keeping with the island rule, the current study suggests that both size trends may occur simultaneously, depending on the initial size of the animal being studied. 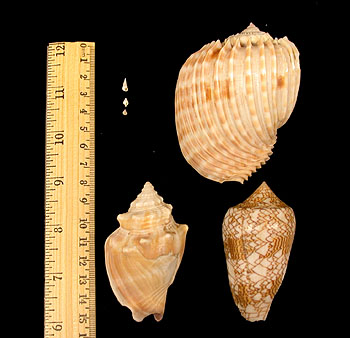 In addition to shedding light on a 30-year old marine science riddle, McClain’s paper also suggests that terrestrial ecologists can learn from size variations in the ocean as well as on land. Specifically, it points out that marine snails appear to follow the “island rule,” even though several of the classical “island-rule” factors (reduced habitat, predation, and competition) may not apply. This leads the authors to hypothesize that, although these three factors are certainly important in some cases, they may not be necessary to explain the general trend of size changes on isolated islands. They propose that food supply could be the primary factor controlling animal sizes on islands as well as in the deep sea.

Verifying this new hypothesis will require many more studies, both on land and in the ocean. As McClain notes, “One of the challenges of evolutionary biology is that we can’t set up experiments to test many of our hypotheses—we simply have to collect as much field information as possible, then see what general trends emerge from the data.” To this end, he and his fellow researchers hope to extend their size studies to other types of marine animals, including bivalves (such as clams) and cephalopods (such as octopus and squid). He also hopes that other marine biologists will be interested enough to perform similar studies on other deep-sea animals.