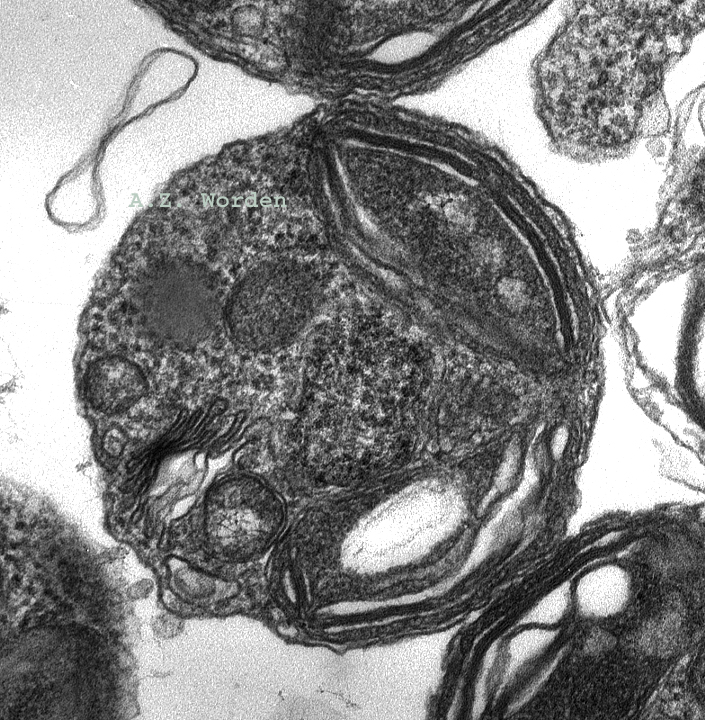 Ostreococcus lucimarinus as shown in Worden et al. 2004. This cell is less than 1 micrometer in diameter! (AZ Worden)

Within the last 7 years tremendous diversity of marine protists has been revealed based on environmental SSU rDNA gene sequencing. Many of these protists are novel, not yet cultured and of unknown functional roles. Some are likely to be predators, while others are photosynthetic or mixotrophic. We are characterizing both novel and ubiquitous protists. Furthermore, we are studying interactions between predator and prey populations. In combination with other studies our research shows that protistan grazers can exhibit prey specificity, as well as functional responses, and that assimilation efficiencies differ dramatically between prey groups (e.g. Prochlorococcus is assimilated more efficiently than Synechococcus). Thus, different prey can be consumed at different rates and a greater proportion of carbon from some prey groups is transferred to higher trophic levels than from others. This impacts not only the complexity of trophic linkages amongst the smaller size fractions but also the diversity and distribution of microbial populations (via selective protistan grazing). To accurately model food webs, protistan grazing strategies and prey digestibility (some are of better food quality than others) must be accounted for. We are developing biochemical and proteomic approaches as well as ‘species’-specific probes to target and study specific interactions in natural systems, including analysis of protistan food vacuoles and food particle processing. Cues employed in prey selectivity, prey switching and the influence of food quality on these interactions are under study. These studies also address parasitism by novel protists, one group of which has already been found to parasitize dinoflagellates (which can cause red tides and toxic blooms). The regulatory role of parasitism in marine systems is largely unknown.

We have several ongoing DOE funded Community Sequencing Projects or Technology Development Projects in this area. These include sequencing chrysomonad species, one of which is purely heterotrophic and the other of which is mixotrophic, as well as sorted cells from the natural environment.