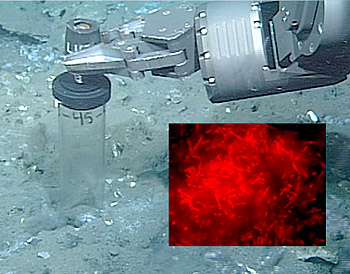 By analyzing the DNA of an entire community of microorganisms in deep-sea sediment, researchers at MBARI and the Joint Genome Institute have shown how some of these microbes could consume methane, an important contributor to global warming. Microbes in marine sediments are known to produce huge quantities of methane, but very little reaches the atmosphere. Scientists have speculated that most of this methane is consumed by other microbes that also live in the sediment. This recent DNA analysis identifies a key group of microbes that consume methane by reversing the biochemical process used by methane producers. This groundbreaking work appears in the September 3, 2004 issue of Science magazine.

The case of the disappearing methane

When most people think about global warming, they think of carbon dioxide. But concentrations of methane, another “greenhouse” gas, have also been increasing dramatically due to human activity. In fact, methane is even more effective than carbon dioxide in trapping the sun’s heat and warming the Earth’s atmosphere.

Since the oceans are by far the largest areas of flooded sediments on earth, they should be a huge source of methane. In fact, methane has been detected in many sea-bottom sediments, where it continually seeps upward toward the sea floor. However, before the methane reaches the water-sediment interface, much of it seems to just disappear. For decades, scientists have assumed that this missing methane was being consumed by microorganisms within the sediment, but no one had been able to positively identify the particular organisms or biochemical processes involved.

This missing methane might be just another scientific curiosity if methane wasn’t such a big player in global warming. In their efforts to understand global warming, scientists have been building increasingly sophisticated computer models of the Earth’s climate. These models must take into account the sources and “sinks” of methane as well as carbon dioxide. Land-based sources and sinks of methane have been studied intensively, but the fate of methane in the ocean is still poorly understood and adds to the uncertainty of the models.

Looking for a “smoking gun”

About five years ago, marine biologists found evidence that methane in ocean sediments was being consumed by tiny single-celled organisms called “archaea.” The leading suspect in this case is a particular strain of archaea with the unglamorous title of AMNE-1. Unfortunately, scientists have not been able to grow these methane-consuming archaea in the laboratory, so little is known about them. However, AMNE-1 appears to be closely related to another type of archaea that produces methane. Scientists know a lot about these methane-producing archaea and the biochemical reactions they use to produce methane (a process known as “methanogenesis”).

Because the methane-producing and methane-consuming archaea are so closely related, some scientists have suggested that methane-consuming archaea use essentially the same biochemical processes as methane producers, but in reverse order. This hypothetical process is called, logically enough, “reverse methanogenesis.” However, other scientists have questioned this theory on the grounds that running the reactions in reverse would require the microbes to expend more energy than they got out of the process—not a good strategy for survival.

Steve Hallam, a postdoctoral fellow at MBARI, set out to test the theory of reverse methanogenesis. Hallam and his collaborators had two main goals: to look for evidence of reverse methanogenesis and to learn about how the process works. Their strategy was to examine the DNA of AMNE-1 methane-consuming microbes to look for genes that were known to occur in methane-producing microbes.

Unfortunately, without culturing the AMNE-1 methane-consuming microbes, there was no easy way to isolate enough of their DNA for analysis. This forced the researchers to try an entirely new (and much more complicated) approach called “environmental genomics.” Environmental genomics involves analyzing the DNA of all the organisms in a particular environmental setting, such as a drop of seawater or (in this case) a few tablespoons of deep-sea mud.

Basic DNA analysis is a little bit like trying to understand how a car works by looking through a manufacturer’s parts list. By itself, the parts list doesn’t tell you much. But if you already know, for example, what the parts for disc brakes look like, you can search through the manual to determine if your particular car has disc brakes. In environmental genomics, the process is more like taking the parts lists from all the cars in your neighborhood, shredding them, and then looking for patterns in the millions of shredded pieces.

Although Hallam and his collaborators couldn’t culture the methane-consuming microbes, they tried to make sure that their environmental-genome sample contained as many of these microbes as possible. They started by taking a core sample of sea-bottom mud from an area where methane was known to be seeping through the sediments. In addition, they only used mud from a depth at which previous studies had confirmed the presence of methane-consuming microbes. Finally, they filtered the sample to exclude organisms that were larger or smaller than the microbes they wanted to study.

Assembling genes from bits and pieces

Returning to the car analogy above, suppose you had a collection of shredded parts manuals from all the cars in your neighborhood and you wanted to determine what types of cars were most common. One approach would be to search through the shredded parts lists for a specific part that would be unique to each type of car.

Hallam and his collaborators did something similar by studying a particular type of DNA called “ribosomal DNA,” which is unique for each type of organism. In this case, the ribosomal DNA indicated that at least 13 different types of bacteria and six types of archaea were present in the mud sample. But the AMNE-1 (methane-consuming) archaea were by far the dominant group. This was good news for the researchers because it meant they would have plenty of DNA from methane-consumers to work with.

Having found the ribosomal DNA from AMNE-1, the researchers could assume that adjacent (non-ribosomal) DNA in the same gene fragments also came from ANME-1. This would be like looking through your parts manuals for shreds that contained information on the identifying part for your car, and then piecing together other shreds from the same page, which would tell you about other parts for the same car.

The scientists then analyzed the DNA from these gene fragments to look for patterns in the DNA that were unique to the AMNE-1 group. Finally they searched through their entire sample for similar DNA patterns to compile a list of all the genes that came from AMNE-1.

Examining this huge parts-list of genes, Hallam discovered that the AMNE-1 archaea (a methane consumer) had almost all the genes necessary for methane production. Using this information he was able to construct a biochemical model of how the AMNE-1 archaea might be consuming methane.

Looking at the bigger picture

Hallam’s research provides a detailed description of a process that has up to now been largely theoretical. But this is just one step in a long, ongoing research process. Using his findings as a starting point, Hallam expects that other scientists will be able to work out the detailed biochemistry of reverse methanogenesis. He points out, “There are many other approaches to the same problem. There are geochemists, biochemists, and genome scientists all working on this. I would call it a ‘systems biology’ approach.” He adds, “This study is not just about disassembling a particular organism. This is about trying to understand a global geochemical process from an ecological and genomic perspective.”

Environmental genomics is an emerging field. So far, scientists have used this technique to analyze microbial communities in seawater, in acid mine waste, and now in deep-sea sediment. Thus, Hallam’s sample of deep-sea mud represents a new frontier. As he put it, “This study represents just the tip of the iceberg. There are so many other studies that could be done using the data we have collected… The environmental sample we analyzed contains a vast reservoir of untapped genetic potential. Accessing it will be the challenge.”

Over the next few years, Hallam visualizes other scientists combing through the database of genetic code that he and his colleagues have created and posted online, in order to solve other ecological, biological, and genetic puzzles. Thus, what might at first glance appear to be a narrow study of a single microbe could eventually lead to additional scientific discoveries and a better understanding of how microbes affect global warming.