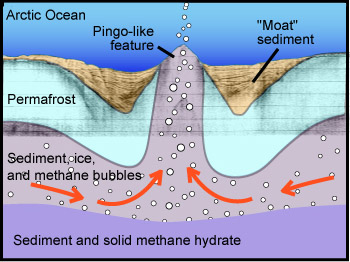 This conceptual drawing (not to scale) shows Paull’s hypothesis that methane gas from deep hydrate deposits could push sediment up from below the ocean bottom to create a pingo-like feature. The gray lines in the background are from a seismic profile through one of these enigmatic features. Image: (c) 2007 MBARI

According to a recent paper published by MBARI geologists and their colleagues, methane gas bubbling through seafloor sediments has created hundreds of low hills on the floor of the Arctic Ocean. These enigmatic features, which can grow up to 40 meters (130 feet) tall and several hundred meters across, have puzzled scientists ever since they were first discovered in the 1940s.

Writing in the January issue of Geophysical Research Letters, MBARI geologists Charlie Paull and William Ussler and their coauthors described the results of field work they conducted on the Beaufort Sea Shelf, offshore of the north coast of Canada. In this area of year-round sea ice and permafrost, the team spent over a month mapping the seafloor and collecting sediment cores and gas samples from these underwater hills, which they call “pingo-like features.” 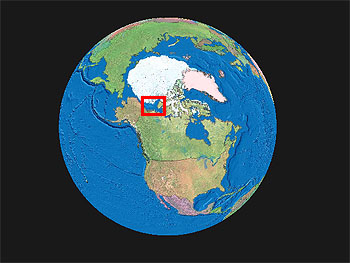 This study took place in the Beaufort Sea, far above the Arctic Circle, off the north coast of Canada. For a closer view of the study area (outlined in red) see the illustration at right. Image: (c) 2007 MBARI 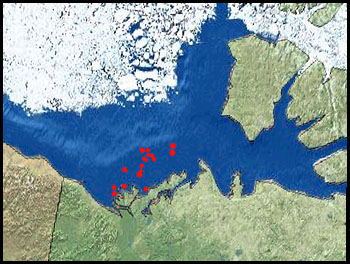 The red dots on this map show a few of the hundreds of undersea hills (“pingo-like features”) in the Beaufort Sea. Many terrestrial pingos are located on the Tuktoyaktuk Peninsula, just below the red dots. Image: (c) 2007 MBARI

“Pingos,” small, dome-shaped, ice-cored hills, are found in many Arctic regions. “Pingo-like features” are similar in shape and size to pingos on land, but are found underwater, on the continental shelf in several parts of the Arctic. Previous studies have suggested that pingo-like features are pingos that formed on land but were submerged when sea level rose following the end of the last ice age, over 10,000 years ago.

Based on their geologic fieldwork and subsequent chemical analysis of the gas and sediments from eight pingo-like features, Paull and his coauthors propose an alternative hypothesis: Pingo-like features form when methane hydrate (a frozen mixture of gas and seawater) decomposes beneath the seafloor, releasing gas that squeezes deep sediments up onto the seafloor like toothpaste from a tube.

The geologists based this hypothesis on a number of observations and measurements. First, sound waves bounced through the pingo-like features showed that they were not built up from layers, but consist of a jumbled mixture of sediment and small nodules of fresh-water (rather than salt-water) ice. Carbon-14 dating of organic matter in the sediment at the crests of several hills showed that this sediment was deposited before the last ice age, thousands of years before sediments on the surrounding seafloor. Finally, many of the pingo-like features were surrounded by shallow “moats,” where the seafloor within a kilometer of the hill had apparently subsided. 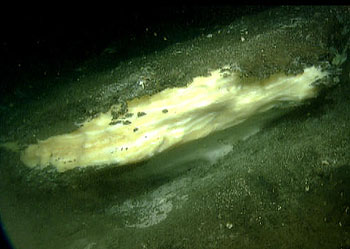 Even with evidence that pingo-like features were made of older, deeper sediment that had been pushed up from beneath the seafloor, the geologists still had to figure out what geologic process could generate enough pressure to lift seafloor sediments. The most obvious source of such pressure was methane gas, which the researchers observed bubbling out of the tops of several pingo-like features.

After chemically analyzing this gas, the researchers concluded that it originated as methane hydrate, an ice-like mixture of water and methane that forms within sediments under much of the Arctic seafloor and beneath permafrost areas on land. Methane hydrate can only remain solid at low temperatures and high pressures. Such conditions exist several hundred meters below the seafloor in this part of the Arctic Ocean.

The researchers suggested that such buried hydrates might be decomposing and releasing large amounts of methane gas. This seemed possible because the seafloor in this area has been gradually warming over the last 10,000 years, after being flooded as sea levels rose at the end of the last ice age. Although within a few degrees of freezing, the seawater in this region is at least 10 degrees Centigrade (20 degrees Fahrenheit) warmer than permafrost-filled soil. Thus, when the ice sheets from the last ice age melted and the ocean flooded the continental shelves, it caused the seafloor sediment to become warmer. 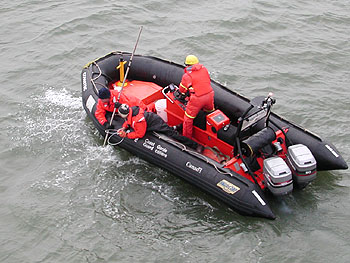 Researchers tried several methods for collecting methane gas that bubbles up from pingo-like features into the frigid waters of the Arctic Ocean. Image: (c) 2003 Charlie Paull

Over thousands of years, the scientists believe, this “wave” of warming moved downward through the sediment. Eventually it reached the frozen methane hydrates, hundreds of meters down. Even a slight temperature increase could have caused some of the buried methane hydrates to decompose, releasing methane into the surrounding sediments.

Paull and Ussler’s data suggest that this newly released methane migrated sideways under the seafloor, held in place by an impermeable layer of frozen soil that lies between the hydrates and the seafloor. Eventually it collected and moved toward the surface along faults or in other areas where the sediments were relatively weak.

Eventually the extruded sediment collected to form the low undersea hills visible on bathymetric charts. At the same time, areas on either side of the mounds, where much of the gas and sediment originated, slowly collapsed, forming the deeper “moats” observed by the researchers. 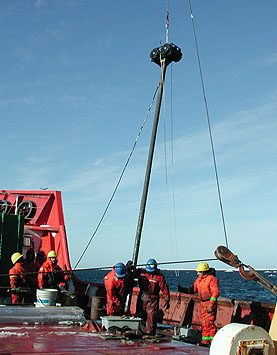 Sediment cores collected from the floor of the Arctic Ocean helped the research team understand more about the history of this remote ocean basin. The snow on the deck of the ship is a reminder of the challenges that scientists face in Arctic research. Image: (c) 2003 Charlie Paull

According to Paull, “We don’t know if this gas and sediment was burped up in a single year, or moved slowly like a glacier.” In either case, Paull’s data suggest that pingo-like features are growing in response to warming that started thousands of years ago. Thus, their growth is not a result of human-induced global warming. However, Paull’s research does show that pingo-like features are still growing and releasing methane today.

Because methane is a potent greenhouse gas, climate scientists would like to know how much is bubbling up from the seafloor worldwide. Future research on methane hydrates and pingo-like features may help address this question. As Paull phrased it, “Pingo-like features are one of the places where we see methane coming up through the seafloor. As yet we don’t know how important they are, since we don’t know how much gas is coming up in the Arctic as a whole or in other seafloor areas.”

This study also provides scientists with clues to how buried methane hydrate deposits might behave in other parts of the world in response to global warming. According to Paull, “One of the questions we’re trying to answer is ‘What do buried hydrates do when they are suddenly warmed up?’ In this case, we have a field experiment that’s been going on for thousands of years.” 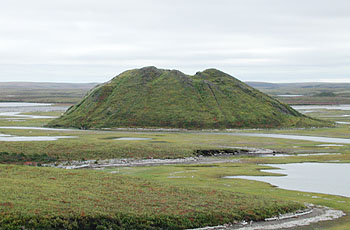 This photograph shows a terrestrial pingo rising on the Tuktoyaktuk Peninsula, in far northern Canada. “Pingo-like features” are similar in shape, but form on the floor of the Arctic Ocean. 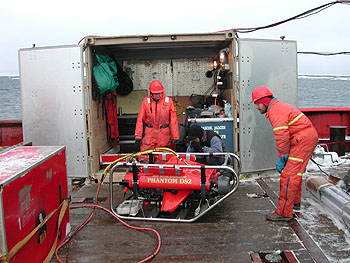 Paull and his coworkers used this small robot submarine to videotape images of gas bubbling up from the seafloor. With a little ingenuity (and a kitchen funnel) they used the submarine to collect samples of this gas for laboratory analysis on shore. 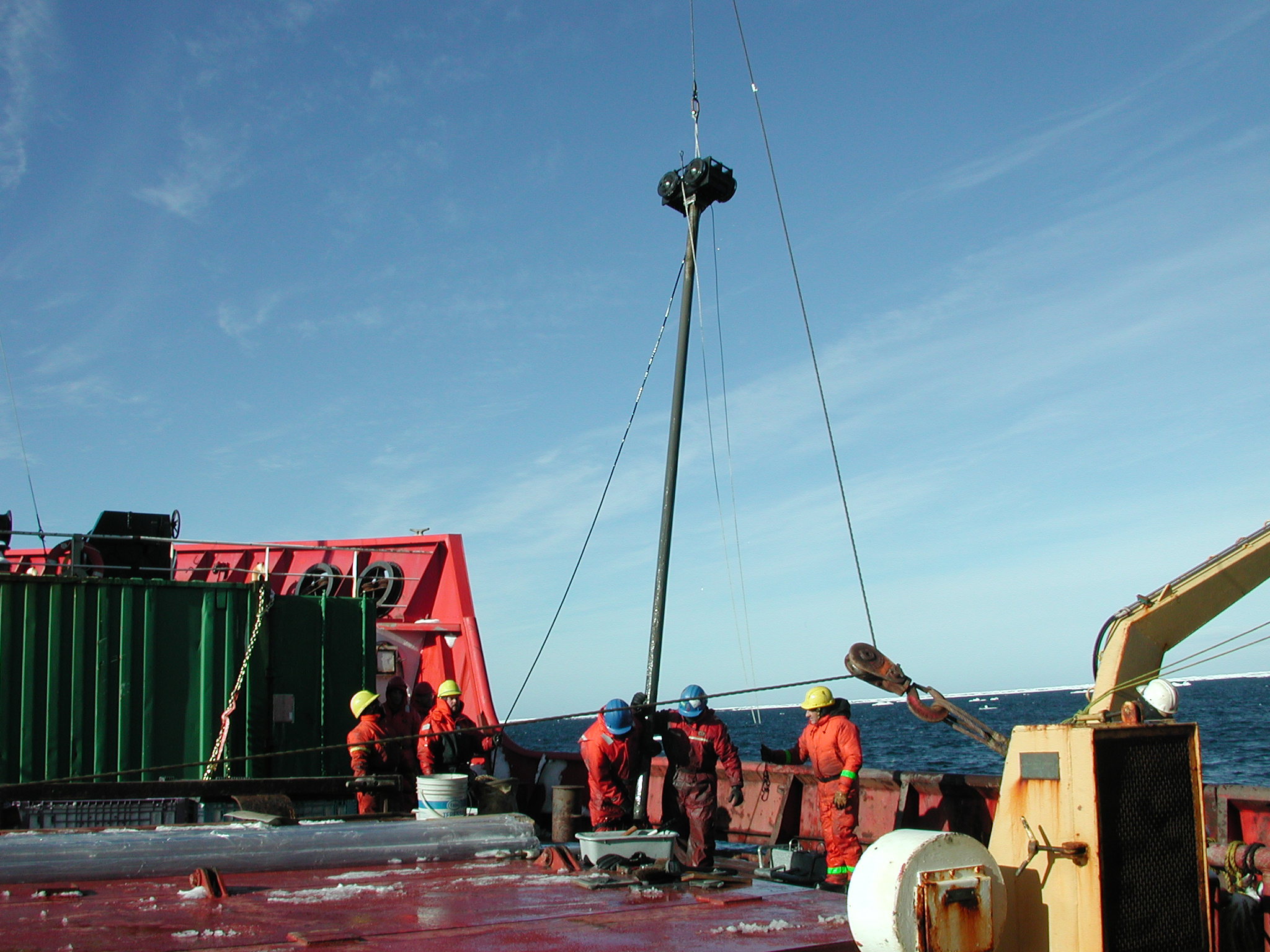 Sediment cores collected from the floor of the Arctic Ocean helped the research team understand more about the history of this remote ocean basin. The snow on the deck of the ship is a reminder of the challenges that scientists face in Arctic research.