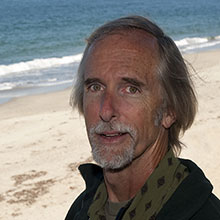 Ed designs electrical and electronic systems in support of MBARI’s technology development and scientific research goals. He has an affinity for power conversion, power distribution, and data acquisition systems, and enjoys trying to outwit the tightly constrained solution space posed by most oceanographic design problems… without breaking any laws of physics in the process.

After earning a BSEE from Swarthmore College, Ed joined the Woods Hole Oceanographic Institution where he worked for several years on micro-power buoy, drifter, and profiler data acquisition systems and software. He then spent two years at NASA Ames working to integrate sensor payloads aboard airborne research platforms.

At MBARI since 1990, Ed was initially responsible for the end-to-end power system of the all electric ROV Tiburon, and contributed to the onboard computer and data multiplexer system. He designed the original propulsion and control-surface drivers for the Dorado-class AUVs, the power generation and seafloor transmission system for the MOOS Portable Observatory Mooring, and the shoreside 10 kVDC control system for the MARS seafloor observatory. Most recently, Ed has returned to his milliwatt-counting roots with the power switching and monitoring system for the low power, long endurance Tethys class of Long Range AUVs.