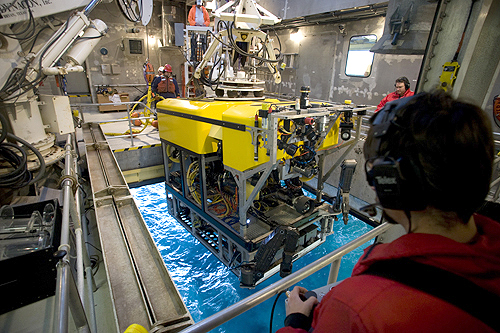 The remotely operated vehicle Doc Ricketts makes one of its first test dives in Monterey Bay. Like its predecessor, ROV Tiburon, this ROV is launched and recovered through a “moon pool” between the twin hulls of MBARI’s research vessel Western Flyer. Image: Todd Walsh (c) 2009 MBARI 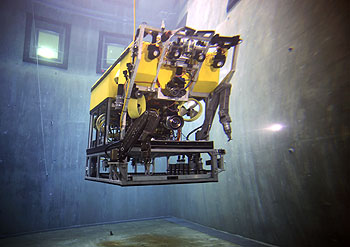 MBARI ROV pilots and engineers put the Doc Ricketts through its paces in the MBARI test tank before taking it out to sea for its first ocean dive.
Image: Todd Walsh (c) 2008 MBARI

On February 24, 2009, MBARI’s new robot submarine, the ROV Doc Ricketts made its first research dive. The new ROV replaces MBARI’s ROV Tiburon, which was built by MBARI staff in 1996. The new ROV has more sophisticated control systems and can lift much heavier loads—abilities that will come in handy as MBARI scientists and engineers work on large, complicated underwater experiments and ocean observatories.

The new vehicle is named the ROV Doc Ricketts after the local marine biologist Ed Ricketts, who was made famous by John Steinbeck’s book, Cannery Row. 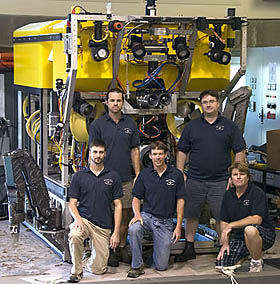 The pilots for Doc Ricketts not only “fly” the vehicle underwater, but also maintain and repair the complicated robot. From left to right, they are: Bryan Schaefer, Marc Talkovic, Eric Nelson, Bernard Roth, and Randy Prickett. Image: Todd Walsh (c) 2008 MBARI

The new remotely operated vehicle (ROV) arrived at MBARI last July. Since then, MBARI engineers and ROV pilots have been installing manipulator arms, cameras, lights, sonar, and many other instruments on the vehicle. They also spent weeks trying out the new ROV in the MBARI test tank.

Before the new ROV could be launched from MBARI’s research vessel Western Flyer, a new tether-handling system and launch crane had to be added to the vessel. The ROV power-supply and control systems on the ship were also upgraded.

In late February, the new ROV got its first chance to dive in really deep water. Western Flyer traveled about 100 kilometers offshore of Point Conception, to a research area known as “Station M.” Marine biologist Ken Smith has been studying deep-sea animals in this area for several decades. These long-term studies have shown how deep-sea animals respond to changing conditions at the sea surface.

At about 3:30 in the afternoon on February 24, ROV Doc Ricketts reached the seafloor 3,993 meters (about 13,100 feet) below the surface, and began collecting samples of seafloor mud. This simple act represented the culmination of years of effort, and the beginning of a new chapter in MBARI’s exploration of the deep sea. 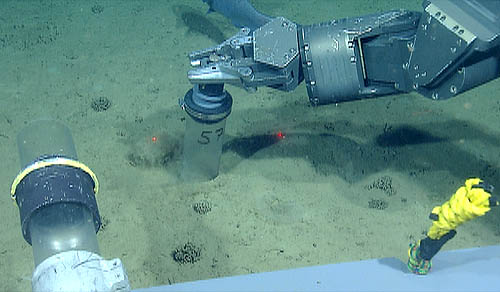 This photo shows the manipulator arm on the ROV Doc Ricketts inserting a “push core” into the seafloor at Station M, almost 4,000 meters (2.5 miles) below the sea surface. When the clear plastic tube is pulled out of the sediment, the mud stays in the tube, and can be brought back to the surface. After the ROV returns to the research vessel Western Flyer, scientists on board can study tiny animals that live within the mud. Image: (c) 2009 MBARI