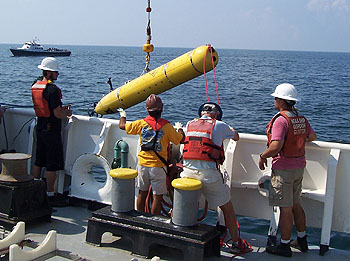 MBARI’s Division of Marine Operations, under an agreement with the National Oceanic and Atmospheric Administration (NOAA), sent a high-tech robotic submersible to the oily waters of the Gulf of Mexico. The goal is to collect information about the oil plume from the Deepwater Horizon drilling rig accident for NOAA.

Although satellites and aircraft can help show the extent of the spill at the surface, MBARI’s autonomous underwater vehicle (AUV) will help researchers understand the nature and extent of any plumes of oil that may be hidden beneath the surface of the ocean.

The MBARI AUV is being deployed from the NOAA Ship Gordon Gunter in Pascagoula, Mississippi. The Gordon Gunter departed from shore on Thursday, May 27th. The AUV was launched into the waters of the Gulf for the first time this morning (May 28, 2010). 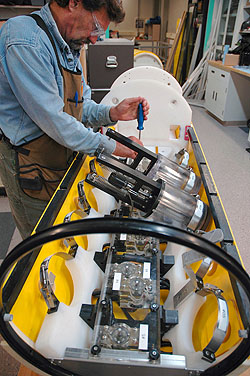 Autonomous underwater vehicles are robotic, untethered submersibles that are programmed at the surface, then navigate through the water on their own, collecting data as they go. The MBARI AUV can measure physical characteristics of the water, such as temperature, salinity, and dissolved oxygen, detect chlorophyll from microscopic marine algae, and measure concentrations of small particles (or oil droplets) in the water.

This AUV is unique in that it carries “gulper” samplers that can collect up to ten 1.8-liter water samples while traveling through the water (or through the plume in this case). The AUV also uses cutting-edge artificial intelligence software to decide where to go and when to collect its water samples. Engineers can program the on-board computers to help the AUV find a plume and then map its boundaries, as well as to take water samples both within and outside the plume.

After the AUV is recovered, its water samples will be analyzed for a variety of chemicals associated with the oil and dispersants. These samples may also be subjected to DNA analysis to determine what types of algae, bacteria, or other microorganisms are present.

This MBARI AUV can dive to 1,500 meters (5,000 feet) below the surface—deep enough to collect water samples near the seafloor in the vicinity of the oil spill. The vehicle typically follows a “roller-coaster” path through the water, which allows its instruments to monitor a cross-section of the ocean, as shown in the illustration below.

This illustration shows a cross section of 50 kilometers (30 miles) of ocean created by MBARI’s AUV off the coast of California. The three plots show salinity, chlorophyll (which indicates the presence of microscopic marine algae), and optical backscatter (which indicates the presence of small particles in the water). Higher concentrations are shown in red and orange, lower concentrations in blue and purple. Image: John Ryan (c) 2009 MBARI

MBARI engineers and scientists have been developing this AUV for almost a decade, and added its water-collection capability in 2007. One of the team’s goals has been to replace expensive shipboard measurements with information collected automatically by the AUV. The vehicle has been used to study red tides and other algal blooms and to understand and perform long-term water quality monitoring.

The MBARI team is excited by the prospect that their vehicle may be useful in understanding the Gulf oil spill. Information about where oil is spreading beneath the ocean surface will help biologists and others understand the effects of this catastrophic event.

“MBARI’s AUV and gulper system provides a surveillance and sample collection capability that is complementary to other tools being deployed to understand the fate of the subsurface plume of oil and dispersant.” said MBARI President and Chief Executive Officer Chris Scholin. “Coordinating this response in partnership with government and academic institutions is not only important for providing much-needed fundamental information on the spill and its impacts, but also serves as a valuable learning experience for understanding how to respond to such incidents in the future.”