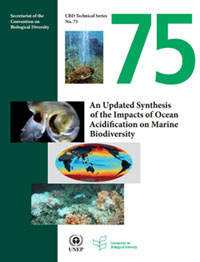 The latest and most important scientific findings about ocean acidification have been compiled into a single, cohesive publication, co-authored by a Monterey Bay Aquarium Research Institute scientist. Senior Scientist James Barry was one of the authors of this 100-page report, An updated synthesis of the impacts of ocean acidification on marine biodiversity, released on October 8, 2014 by the Secretariat of the Convention on Biological Diversity (CBD), a multilateral treaty dedicated to conserving the planet’s biological resources.

Scientific research on ocean acidification has increased enormously in the last 10 years, with hundreds of reports published yearly. “It’s difficult to keep up-to-date on the latest findings,” said Barry. “The new report provides a single resource summarizing this blossoming literature, and is a key handbook for those aiming to gain a new perspective concerning the results and implications of the most recent research.”

Ocean acidification—caused by the increase of carbon dioxide in the world ocean due to human-related activities—affects ocean chemistry and poses major threats to marine organisms and habitats. The report emphasizes that the acidity of the surface ocean has rapidly increased by approximately 26 percent since pre-industrial times.  “The impacts of ocean acidification are beginning to be felt in some areas, but future projections indicate even more broad-reaching deleterious impacts if action is not taken,” wrote Braulio Ferreira de Souza Dias, executive secretary of the CBD.

Building on a previous report from 2009, the new report highlights the most important scientific findings on ocean acidification, focusing on scientific papers published in the last five years. The report summarizes the latest research on topics including potential consequences of ocean acidification on marine communities, socioeconomic impacts on people whose livelihoods rely on a healthy ocean, and adapting advanced technologies for monitoring ocean acidification and its effects.

The report is a huge collaborative effort, with contributing authors from 11 countries. Barry was one of many researchers who provided text and comments on the developing manuscript. As the literature on ocean acidification continues to expand, it is essential for scientists, governments, and resource managers to have access to the latest information. The new report readily provides this information in an easily digestible form.