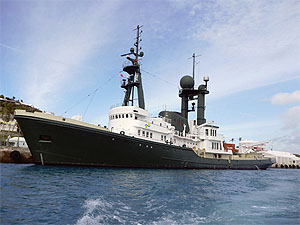 On January 30, 2012, the Schmidt Ocean Institute ship Lone Ranger left Bermuda and sailed south into the Sargasso Sea with a group of researchers onboard led by MBARI marine biologist Ken Smith and engineer Alana Sherman. This is Smith’s third Sargasso Sea research expedition supported through a collaboration of MBARI, the Marine Science and Technology Foundation, and the Schmidt Ocean Institute.

As in Smith’s previous expeditions supported through this collaboration in February 2011 and July-August 2011, the researchers will stop at several mid-ocean locations to study drifting clumps of Sargassum weed and the animals that live within them. They will also send cameras and instruments down thousands of meters below the surface to study animals on the deep seafloor, most of which survive on organic debris that sinks down from the sea surface. The researchers’ main goal is to better understand how both the surface and deep-sea communities in this little-studied region are changing over time. 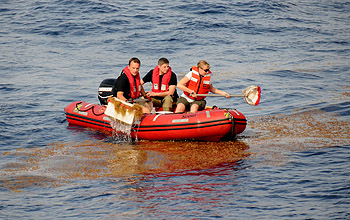 One new resource the researchers will have at their disposal on this cruise isthe Kite Assist System, an aerial instrument platform developed by the Kite Assist Institute with support from the Marine Science and Technology Foundation. Just as it sounds, the Kite Assist System consists of kites of varying sizes to suit varying weather conditions, sea states, and wind speeds. Kite Assist Institute staff will fit the kites with cameras and launch them from the ship to heights of up to 1,000 meters (3,000 feet). Researchers will use video and still images from the kites to locate and track drifting mats of Sargassum in the open ocean—something that is not always easy to do from onboard the ship. Images from this Kite Assist System will also be compared with large-scale imagery of the Sargasso Sea being collected by satellites.

The public can learn more about the science and technology behind this cruise, as well as follow the expedition’s progress through daily cruise logs posted from the ship.

Sept 23, 2014 – Over one thousand miles wide and three thousand miles long, the Sargasso Sea occupies almost two thirds of the North Atlantic Ocean. Within the sea, circling ocean currents accumulate mats of Sargassum seaweed that shelter a surprising variety of fishes, snails, crabs, and other small animals.
May 12, 2014 – Amy Zimmerman, a postdoctoral fellow at MBARI, recently conducted field experiments to study the interactions between viruses and nutrients in the ocean. She traveled to the Sargasso Sea (in the North Atlantic Ocean) to investigate how these interactions impact picophytoplankton, the smallest community of phytoplankton.
Jan 30, 2012 – On January 30, 2012, a group of researchers led by MBARI marine biologist Ken Smith and engineer Alana Sherman left Bermuda and sailed south into the Sargasso Sea. This is Smith's third research expedition to this region using the research vessel Lone Ranger, operated by the Schmidt Ocean Institute.