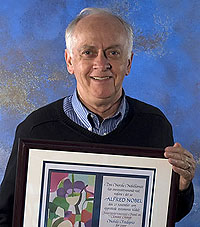 Marine chemist Peter Brewer is delivering one of the plenary talks at the Third International Symposium on the Ocean in a High-CO2 World. Brewer is shown here holding the 2007 Nobel Prize certificate that was awarded jointly to Al Gore and to the Intergovernmental Panel on Climate Change (IPCC). Brewer was a member of this panel and served as lead author on the IPCC Special Report on carbon capture and storage. Image: Todd Walsh © 2008 MBARI

Several hundred researchers and decision makers from around the world are gathering in Monterey this week for the Third International Symposium on the Ocean in a High-CO2 World. During this four-day conference, leading experts and decision makers are discussing the latest scientific findings and implications of ocean acidification. MBARI researchers have been instrumental in the planning of this conference, and are describing their cutting-edge research in a variety of talks and posters at the meeting.

This symposium is held only once every four years. Previous meetings were held in Paris in 2004 and in Monaco in 2008. Researchers from MBARI and other regional organizations worked together to bring this year’s meeting to Monterey Bay, where many groundbreaking ocean-acidification research projects are underway.

Over the last century or so, the ocean has absorbed about one half of the carbon dioxide that humans have released into the atmosphere through burning of coal, oil, and other fossil fuels. This additional carbon dioxide is causing seawater to become more acidic over time. At this week’s meeting, scientists and decision makers are coming together to discuss the impacts of ocean acidification on marine organisms, ecosystems, and biogeochemical cycles. Conference participants are also considering the ongoing socioeconomic consequences and policy implications of ocean acidification.

MBARI researchers Peter Brewer, Jim Barry, and George Matsumoto have been actively involved in planning this meeting. Brewer served on the international organizing committee and Barry and Matsumoto served on the local committees. Matsumoto has overseen an MBARI-funded scholarship program that is allowing 10 professional educators to attend the conference. He is also partnering with the West Coast National Marine Sanctuaries to host a workshop on Effective practices for ocean-acidification communication and education immediately following the Ocean in a High-CO2 World Symposium.

MBARI marine chemist Peter Brewer, who has been studying this issue for decades, is giving a plenary talk at the event, summarizing the history of ocean-acidification research since the 1950s. In his talk, Brewer points out that the oceans are now facing a triple threat from rising water temperatures, increasing acidity, and decreasing oxygen concentrations. In the long term, he suggests, these impacts could reduce the ocean’s ability to absorb carbon dioxide from the atmosphere, “accelerating the pace of climate change and vastly changing the ocean we knew just a few years ago.”

Other MBARI researchers are presenting a wide variety of talks and posters about their ocean-acidification work. These presentations are listed below.

Presentations on the effects of ocean acidification on specific marine animals:

Presentations on methods for measuring and studying ocean acidification: