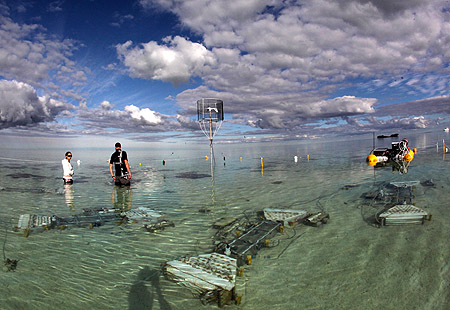 The cpFOCE system on a reef flat near Heron Island, off the northeast coast of Australia. Image © David Kline

Over the last 150 years, human beings have released hundreds of billions of tons of carbon dioxide into the Earth’s atmosphere. About one quarter of this carbon has been absorbed by the world’s oceans, causing them to become more acidic. Ocean acidification is especially dangerous to corals and other organisms that build skeletons out of calcium carbonate. Many experiments have documented the effects of ocean acidification in the laboratory, but few have been performed in the natural environment. A recent article in Nature Publishing’s Scientific Reports journal describes the first controlled field experiment to test the effects of acidification on coral reefs—a multi-institutional effort that involved several MBARI engineers and was based on pioneering work at MBARI.

Since 2003, MBARI researchers led by Peter Brewer have been developing field experiments in which they create small, precisely controlled changes in the acidity (pH) of seawater within test chambers in the open ocean. These “Free-Ocean Carbon dioxide Enrichment” (FOCE) experiments were modeled after “Free-Air Carbon dioxide Enrichment” (FACE) experiments previously conducted on land. Between 2005 and 2011, Brewer’s team built and deployed their first working FOCE experiment in the deep sea, about 900 meters below the surface of Monterey Bay.

After learning about MBARI’s project at conferences, other researchers realized that the monitoring and control systems used in MBARI’s FOCE system were applicable not only in the deep sea, but in other marine environments as well. While the MBARI team was still building and testing the deep-sea FOCE system, they began getting calls from researchers around the world who were interested in building similar ocean-acidification test systems.

Bill Kirkwood, lead engineer for the FOCE project, recalls, “I got an email out of the blue from David Kline, who was a new postdoc working with Ove Hoegh-Guldberg and Sophie Dove at the Global Change Institute of the University of Queensland. He asked me ‘what is this FOCE thing and how does it work?’ At the time, we were looking for tech transfer opportunities. I realized that this project might give us a chance to create a prototype that would be affordable and adaptable by the larger research community.” Thus, the cpFOCE (Coral Prototype FOCE) was born.

Hoegh-Guldberg, Dove, Kline, and Kirkwood prepared a proposal to the Australian Research Council (ARC) to set up an ocean-acidification experiment at Heron Island, off the northeastern coast of Australia. According to Kline, now at the Scripps Institution of Oceanography, “We modified the MBARI FOCE system for application to the challenging conditions found on coral reefs, including warm temperatures, high flow rates, high UV [ultraviolet radiation], and high wave energy. Our goal was to test the impact of ocean acidification on coral reef organisms in as natural a reef setting as possible.”

After the funding came through, Hoegh-Guldberg and Kline assembled a team to begin setting up the system. They faced a number of unexpected challenges, including finding a way to power the computerized control systems. Kirkwood suggested using wind and solar power, and helped redesign the system accordingly.

A number of other MBARI researchers also contributed to the project. Engineer Kent Headley spent many hours working on the complicated software needed to control the cpFOCE, and traveled to Australia to help debug the system. Thomas Maughan designed the pH sensors. Ed Peltzer, a marine chemist, made essential calculations regarding the complicated physical and chemical processes involved in mixing carbon dioxide with seawater.

Much of this work was done for free, as part of MBARI’s commitment to technology transfer—that is, the sharing of technology and knowledge developed at MBARI with researchers elsewhere. In the case of the cpFOCE, MBARI’s involvement was key to the success of the project. 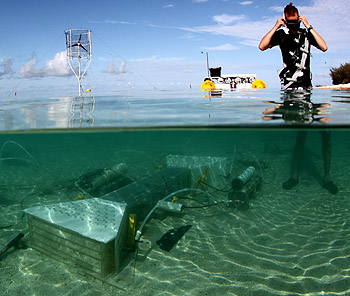 This photo shows one of the cpFOCE flumes underwater, with the wind-power generator and floating computer control system in the background. Image © David Kline

By December 2009, the cpFOCE test system was ready to run. It consisted of three clear plastic flumes, each about one meter long. Seawater enriched in carbon dioxide was injected into one of the flumes so that the pH of the water was consistently 0.06 pH units lower than the pH of the surrounding seawater. A second flume was maintained at 0.22 pH units below background levels, while a third plume contained unadulterated seawater as a control. The system was controlled using a waterproof computer system mounted in a floating raft and powered by solar panels and a wind generator.

Although the cpFOCE system operated for about a year, the recent paper in Scientific Reports describes the results of a three-day test period in December 2009. During this period, chemical conditions in each flume were monitored every three hours. The researchers also placed corals and algae within each flume and monitored their growth.

The initial experiment showed that pH levels vary greatly from hour to hour in the coral-reef-flat environment. During this three-day experiment, the pH of the surrounding seawater varied from about 7.8 to 8.4, depending on the tide and the day/night cycle.

The goal of the experiment was to have conditions in the flumes exactly mimic these same cycles, but with very small but consistent differences in pH. As documented in the recent paper, the three-day experiment proved that the cpFOCE could meet this goal except when tidal currents became particularly strong. As Kline put it, “The cpFOCE is an important new experimental system to study in situ impacts of ocean acidification on coral reef ecosystems.”

Kirkwood says, “The cpFOCE system was important because it was the first iteration of what we now call the ‘xFOCE’ concept. The idea is to create a generic system that can be adapted to test the effects of ocean acidification in a variety of settings. We wanted to provide something as simple and inexpensive as possible, but still customizable, using open-source software and hardware. Ideally it would be something that a three-person team could put together in about six months for about $250,000. We haven’t quite gotten there yet, but that’s our goal”

Since the cpFOCE was completed, Kirkwood has been helping plan and install other xFOCE installations off the coasts of California, France, England, and even Antarctica. “We’re trying to build up a community of users,” says Kirkwood. “That way the members of the community can help support each other when problems arise. We’ve got some experienced folks in Australia and France already. It will be great to see this technology and expertise expand to other areas as well.”