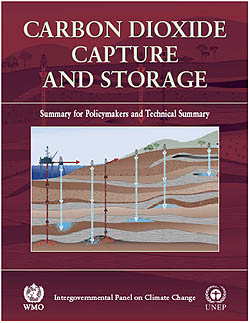 The final IPCC report was released in December 2005.

The Intergovernmental Panel on Climate Change (IPCC) recently published their final report on methods for capturing and storing atmospheric carbon dioxide with the goal of reducing greenhouse warming of the Earth. This report was formally released at the United Nations meeting on climate change in Montreal early December, 2005.

Two MBARI scientists, Peter Brewer, and Jim Barry, worked intensively on Chapter 6 of this report, which describes the risks and potential for storing carbon dioxide in the deep ocean.

The IPCC is an international body established by the World Meteorological Organization and the The United Nations Environment Programme to gather and assess information on climate change, its potential impacts, and options for human adaptation to and mitigation of this change. This report is designed to give policy-makers an overview of the technological options for removing carbon dioxide from the Earth’s atmosphere, or in some cases preventing it from reaching the atmosphere in the first place.

Co-author Brewer believes the report is important because it goes beyond defining the world’s carbon dioxide problems to discussing options for solving, or at least reducing them. “The IPCC has issued a number of previous reports that define the problem. This report is an effort to say, ‘Is it possible to change that?’ There is nothing here that is technically impossible.” Brewer also points out that, regarding carbon dioxide in the ocean, “this report paints a new picture of the world. It shows people in fairly stark detail what the future of the ocean is under various CO2 scenarios.”