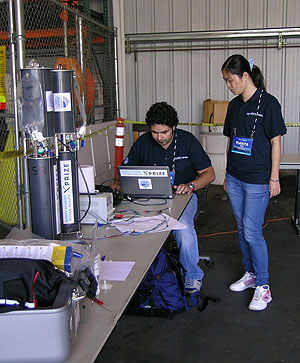 Members of a team from the National Oceanography Centre (UK) prepare their pH sensor for the Wendy Schmidt Ocean Health XPRIZE competition in a staging area at MBARI. They are one of 18 teams from around the world competing for $2 million in prize money. Image: Kim Fulton-Bennett (c) 2014 MBARI.

Over the last one hundred years, humans burning coal, oil, and gas have released hundreds of billions of tons of carbon dioxide into Earth’s atmosphere. About one half of this carbon dioxide has dissolved in the oceans. This is causing the oceans to become more acidic, with possibly devastating effects on corals and many other marine organisms.

Perhaps surprisingly, most oceanographers do not have access to instruments that can measure the acidity (pH) of the ocean precisely and continuously for long periods of time. Existing methods for measuring the pH of seawater either require hand processing of each sample or are very expensive, costing thousands of dollars. Even the more expensive instruments require frequent recalibration and do not work well in the extreme pressure of the deep sea.

To address this problem, Wendy Schmidt, president of The Schmidt Family Foundation, has partnered with the XPRIZE Foundation to create the Wendy Schmidt Ocean Health XPRIZE, a global competition that challenges teams to design robust pH sensors that can accurately and affordably measure ocean acidification. The first two testing phases of the competition are being held at the Monterey Bay Aquarium Research Institute (MBARI) from September to December of 2014.

Since the competition was first announced in September 2013, 18 teams from all over the world have qualified to compete for two prize purses: a $1 million accuracy purse, based on instrument performance, and a $1 million affordability purse, based on instrument cost and usability. All of the systems will be evaluated for accuracy, precision, stability, affordability, and ease of use. They must also function down to 3,000 meters (almost 10,000 feet) below the ocean surface.

The competition involves four testing phases, each of which is more challenging than the previous: 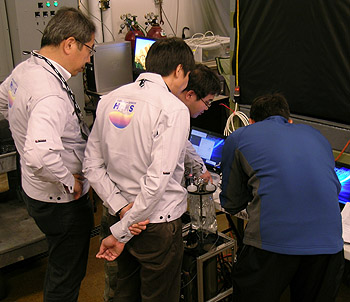 The competition will be overseen by a panel of independent judges, who will make sure that all the entrants follow the prize guidelines and rules. The judges will also review the data collected during all the tests and select the winners in each prize category.

The long-term goal of the competition is not simply to identify new sensors, but also to inspire investment in research. As Paul Bunje, senior director of oceans at XPRIZE Foundation has said, “For every XPRIZE so far, the amount of money invested in winning the prize has been five to ten times the prize itself.”

Marine chemists are not the only ones who will benefit from the development of reliable and affordable ocean-pH measuring systems. Such instruments could also be useful for fishing and aquaculture industries, as well as for governmental agencies. Being able to repeatedly and confidently measure ocean acidification will, in the words of the XPRIZE committee, allow businesses and society as a whole to “anticipate, adapt to, and mitigate ongoing changes to the chemistry of the oceans.”

Eventually, ocean researchers and resource managers may be able to tap into a worldwide network of pH sensors, just as meteorologists currently use a worldwide network of weather stations to monitor global warming. This is why affordability is one of the most important criteria for the competition. As Bunje noted in an interview with Scientific American, “These sensors need to be deployed globally, including in places like developing countries.”

MBARI is excited to be part of this groundbreaking effort, which aligns precisely with Founder David Packard’s original charge for the institute—to develop new instruments, systems, and methods for studying the ocean.

Oct 29, 2020 – The National Science Foundation has approved a $53 million grant to build a global network of chemical and biological sensors that will monitor ocean health around the world.
February 6, 2020 – MBARI engineers have developed a new robotic float for studying coastal waters.
Dec 6, 2018 – Adopt-A-Float program lets grade-school students participate in a major scientific study of the vast Southern Ocean.