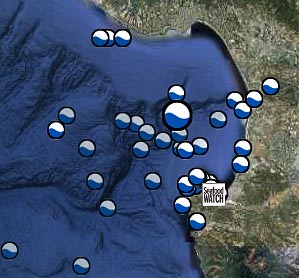 The circles in this Google Earth image show “hot spots” in Monterey Bay that allow the public to learn about scientific research and to explore underwater features within the bay.

Armchair explorers can now become virtual Jacques Cousteaus with the latest release of Google Earth. The new version of this popular 3-D mapping program features an “Ocean” layer, thanks to the addition of data and information from many oceanographic and conservation organizations, including MBARI and the Monterey Bay Aquarium.

Google Earth 5 allows viewers to “fly” around the underwater areas such as Monterey Canyon (shown here).

Clicking the sailing-ship icon for the “Ocean Expeditions” layer shows small anchor symbols scattered across the globe, and connected by a web of fine white lines. The lines trace the routes of oceanographic cruises and the anchors indicate points of interest (photos, a log entry, data collected) during each cruise. MBARI contributed a number of images and logs from our recent research cruises that are accessible through this layer. With just a click of the mouse, visitors can follow research vessels, learn about the equipment and people on the cruise, and track the progress of the expedition. Google plans to add new cruise logs from MBARI and other institutions in the near future.

In addition to the “Ocean Expeditions” layer, an “Explore the Oceans” layer allows Google Earth users to visit eleven of the world’s most well-studied ocean regions, including Monterey Bay. This layer contains information about underwater habitats and animals, including several images of midwater animals contributed by MBARI scientist Steven Haddock. 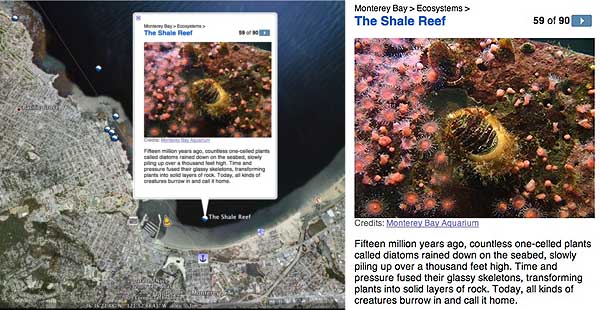 This image from Google Earth 5 shows the southern portion of Monterey Bay and a pop-up window (enlarged, at right) that describes a shale reef just offshore of the city of Monterey.

Google Earth users who want to know about the health of the ocean and strategies for protecting the marine environment will appreciate the “State of the Ocean” layer. This layer includes six sub-layers that provide all sorts of useful information. For example, the Seafood Watch program from Monterey Bay Aquarium is featured here, and allows users to locate the best sustainable seafood choices around the world.

MBARI president and CEO Marcia McNutt served on the Ocean Advisory Council for the Google Earth upgrade project, and was on hand for the official launch of Google Earth 5.0 at the California Academy of Sciences on February 2, 2009. She noted, “The Grand Canyon has always been one of America’s most beloved tourist attractions, and yet how many people know that a canyon every bit as long, steep, and magnificent lies beneath the waters of Monterey Bay?”

With the new ocean features in Google Earth, such amazing undersea wonders are just a few mouse-clicks away.