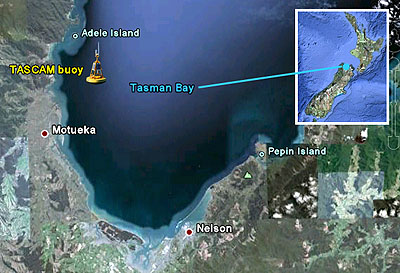 This image shows the location of the new TASCAM mooring in Tasman Bay, New Zealand. Base image: Google Earth

On April 11, 2011, a team of researchers installed a small but high-tech ocean-monitoring buoy in Tasman Bay, at the northern end of New Zealand’s South Island. This buoy, along with additional instruments in the water column and on the seafloor, comprise the TASCAM (TASman Bay, CAwthron, and MBARI) system. As the name suggests, this system resulted from a year-long collaborative effort by the Cawthron Institute, the Tasman District Council, and MBARI, with funding from the Royal Society of New Zealand.

About 40 kilometers across, Tasman Bay is a little larger than Central California’s Monterey Bay. An open body of water surrounded by mountains and agricultural areas, it is strongly influenced by runoff from several large rivers. It is also home to many aquaculture facilities, which culture animals such as New Zealand’s famous green-lipped mussels.

Although Cawthron researchers have installed scientific instruments in Tasman Bay before, this is the first time they have set up a long-term, real-time monitoring system. The system will be used not just by scientists, but also by local environmental management agencies, aquaculture operators, and even recreational fishers.

According to Cawthron marine scientist Chris Cornelisen, “The data can be used, for example, to alert a fisher that the water temperature is ideal for catching a kingfish, or to advise a mussel farmer of the presence of a chlorophyll bloom he might like to let his mussels snack on before harvest, or conversely a drop in salinity that may mean a higher likelihood of contamination from river plumes.”

The new system includes a variety of instruments that measure important properties of seawater, such as temperature, salinity, turbidity, and chlorophyll (an indicator of how much microscopic algae is present). The system also measures ocean currents using a sophisticated current meter mounted on the seafloor. 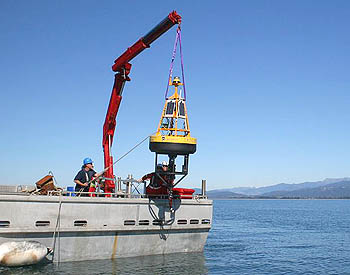 The staff of the Cawthron Institute designed the new buoy based on technology used on MBARI’s moorings in Monterey Bay. MBARI contributed mechanical drawings, software, and an electronics package called the “OASIS mooring controller.” This electronics package collects the data from all the different instruments and then sends this data back to shore in a useable form.

OASIS mooring controllers have been used on MBARI’s ocean-monitoring moorings since the early 1990s. According to MBARI’s platforms engineering group lead, Kent Headley, OASIS has proven itself to be robust and easy to maintain, as well as being relatively inexpensive to produce.

MBARI engineers Craig Okuda, Bob Herlien, and Rich Schramm prepared two OASIS controllers for this project—one to be deployed on the buoy and one to be kept on shore as a spare. MBARI Ocean Observatory Technician Paul Coenen helped the New Zealand team integrate the controller into the mooring and troubleshoot the system. Coenen even traveled to New Zealand, where he helped install the buoy and mooring cable. 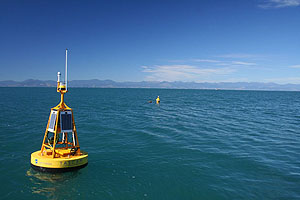 “This project has been a great example of how we can transfer technologies developed at MBARI to other institutions,” says Headley. We have provided Cawthron with designs and a little start-up support, which they will sustain with their own staff and funding. As they expand their monitoring program, Cawthron will build their own OASIS hardware and software. Eventually, they may even transfer some technology, such as new instrument drivers, back to MBARI.”

Headley adds, “Paul Barter [Cawthron senior marine scientist] and his colleagues have proven to be very technically capable and have quickly climbed the learning curve on many fronts.”

MBARI researchers are looking forward to working with their colleagues at Cawthron on future projects. For example, they are discussing the idea of deploying one of MBARI’s Environmental Sample Processors to provide even more information about water quality in Tasman Bay.

Marine researchers want to know the effects of an increasingly acidic ocean, and have turned to two tide pool dwellers for some insight. It appears that mussels and purple sea urchins could tell scientists how marine life might adapt to changes in ocean acidity (pH).
Acorn worms have historically been thought of as shallow-water animals that live in burrows in muddy-bottom areas. Only four species were known to live in deep water. However, a recent paper by MBARI collaborator Karen Osborn and her coauthors shows that acorn worms live in the deep ocean environments around the world.
After six years of design and testing, MBARI scientists have a sophisticated new tool for studying the effects of ocean acidification on deep-sea animals. This complex system, the Free-Ocean Carbon Enrichment (FOCE) experiment, is the only experiment in the world that allows researchers to study ocean-acidification impacts on deep-sea animals in their native habitat, using free-flowing seawater.