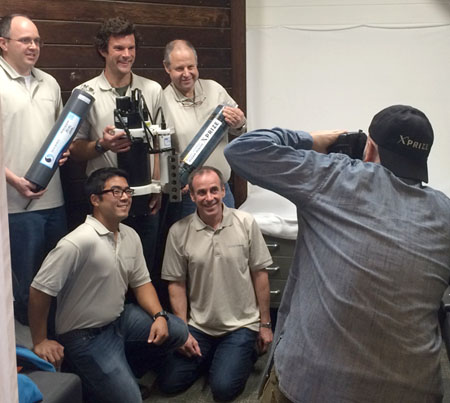 An XPRIZE photographer took a photo of some members of Team DuraFET with the three pH sensors they submitted to the competition. (top row, from left) Ronnie Van Dommelen of Satlantic, Phil Bresnahan of Scripps Institution of Oceanography, Hans Jannsach. (bottom row, from left) Yui Takeshita of Scripps Institution of Oceanography, and Dave Murphy of Seabird. Photo taken by Matt Huelsenbeck of XPRIZE.

Last fall, MBARI hosted the first two phases of the Wendy Schmidt Ocean Health XPRIZE competition. The competition challenged teams to design robust pH sensors that could accurately and affordably measure ocean acidification. Eighteen teams participated in the first phase of the competition; 14 teams made it to phase three. The third phase took place earlier this month, when instruments that survived the first two phases were tested in challenging coastal conditions in Seattle, Washington. The instruments were placed in a test tank built near the Seattle Aquarium, with continuously pumped seawater from Puget Sound. The purpose of this phase was to test the instruments’ resistance to biofouling. Ken Johnson, a senior scientist at MBARI, and Hans Jannasch, a senior research specialist, are members of Team DuraFET, one of the teams that participated in the phase-three testing.