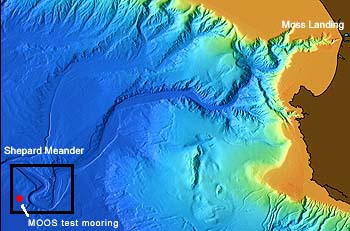 This map shows the location of the new ocean observatory near the Shepard Meander of Monterey Canyon, about 100 kilometers from shore. Image (c) 2006 MBARI

Last week, after almost five years of development, MBARI engineers and scientists celebrated the deployment of a new oceanographic mooring that connects instruments on the deep seafloor with solar panels and a data relay system at the sea surface. The resulting deep-sea observatory is one of only a few such installations world-wide.

The newly-installed surface buoy and seafloor instruments were deployed at the Shepard Meander, 100 kilometers offshore of the Central California coast, in water almost 3,200 meters (two miles) deep. Data from this observatory may help scientists solve a longstanding oceanographic mystery—how animals on the deep seafloor get enough to eat. 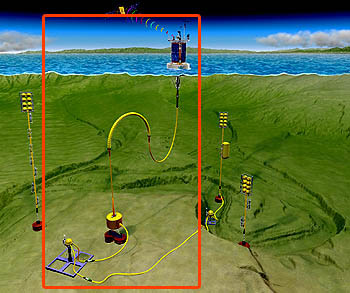 The red box in this illustration highlights the newly-installed surface buoy and undersea instruments that make up the core of MBARI’s ocean observatory at the Shepard Meander. Note: The instruments on the seafloor are actually located several kilometers away from the mooring anchor. Illustration: David Fierstein (c) 2004 MBARI

Here’s how the Shepard Meander observatory system works: The surface buoy supports solar panels and a wind turbine that generate electricity. This electricity is sent down through a four-kilometer-long cable to the seafloor. Extension cables laid along the seafloor carry the electricity to scientific instruments up to several kilometers away.

The observatory’s instruments on the seafloor collect information on oceanographic conditions such as water temperature, water clarity, and currents. This information is sent back to the surface through fiber-optic strands in the seafloor extension cables and the main mooring cable. Once the data reaches the surface buoy, it is relayed to shore via satellite. This live data is then automatically displayed on the MBARI web site by MBARI’s Shore-Side Data System (SSDS).

MBARI engineers have been working on various parts of this project since 1998, as part as the Monterey Ocean Observatory System (MOOS). One significant engineering challenge was developing an anchor cable that could not only hold the surface buoy in place, but also transmit electricity and data between the surface and the seafloor. In addition to extensive computer modeling, this cable-design process also involved some trial and error field testing. Despite setbacks, the engineering team persevered and eventually developed a new cable design. After testing their new cable for the the past year, the engineers feel confident that it will be able to survive all but the most extreme winter storms. 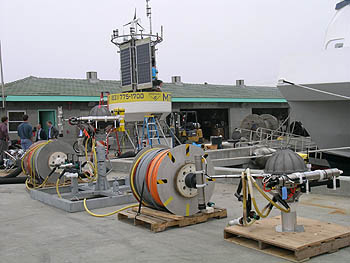 This photo shows some of the components of the Shepard Meander observatory hooked up on the MBARI dock for testing prior to deployment. The large buoy in the background floats at the surface, but all the other instruments and orange cables now sit on the seafloor 3,200 meters below the ocean surface. Image: Kim Fulton-Bennett (c) 2006 MBARI 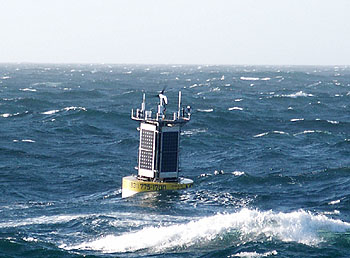 The new observatory was installed in several stages. First the surface buoy, surface-to-seafloor cable, and anchor were deployed. After initial tests showed that the data and power connections to the seafloor were working properly, ROV Tiburon was sent down to lay the extension cable from the anchor to a cluster of scientific instruments about three kilometers away. This step (laying the cable on the seafloor using the ROV) was another major engineering feat, which required several years of research and development by MBARI engineers working closely with MBARI’s ROV pilots. 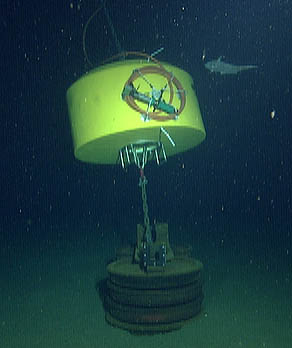 This image taken by ROV Tiburon shows the anchor for the surface buoy (two stacks of railroad-car wheels) and a bright yellow float that keeps the anchor cable off the seafloor. Coiled on the side of the yellow float is the power/data cable from the buoy, with a green underwater plug at the end. ROV Tiburon subsequently attached an “extension cable” to this underwater plug. The other end of the extension cable was attached to a cluster of scientific instruments several kilometers away. Image: (c) 2006 MBARI

In the final step of the deployment, ROV Tiburon carried a cluster of scientific instruments (known as a “benthic instrument node” or BIN) down to the seafloor and hooked the instruments up to the previously laid extension cable. The system was then switched on using a radio link from the Western Flyer, and the team celebrated as new observatory returned its first data. 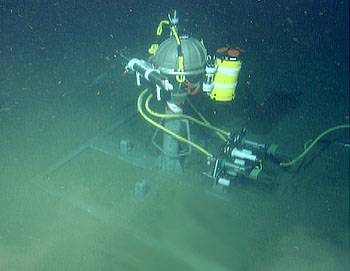 This photo shows a “benthic instrument node” (BIN) with its cluster of oceanographic instruments. At the base of the node are underwater plugs for extension cables that transmit electrical power and data between the BIN and the ocean surface. Image: (c) 2006 MBARI

The creation of this new observatory was a long and challenging process that involved dozens of MBARI staff, and required close coordination between engineers, scientists, ROV pilots, and the crew of the R/V Western Flyer. As data from the observatory pour in, ocean scientists at MBARI and elsewhere will be taking advantage of this unique opportunity to monitor changes in the deep sea in real time. 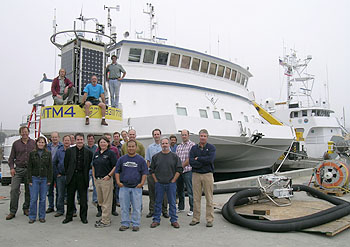 The engineering team for the MOOS science experiment at the Shepard Meander stands in front of the surface buoy before sending it out to sea. This group portrait does not show some of the scientists and ROV pilots who were integral to this ambitious project. Image: Kim Fulton-Bennett (c) 2006 MBARI