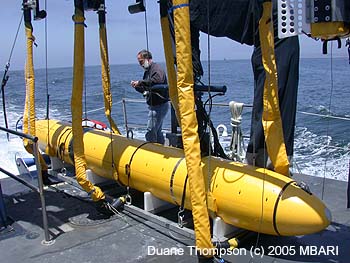 MBARI engineers recently launched an autonomous underwater vehicle (AUV) with three sonar mapping devices on board. The engineering and planning that went into this project at times resembled the preparations for a space-probe launch. Unlike a space probe, the AUV can “fly” into little known regions, yet still return by day’s end. The mission was the culmination of three years of preparation and is part of a larger MBARI endeavor to bring high quality sonar mapping devices to the deep sea.

Each of the three sonar devices on the AUV measures a distinctive aspect of the sea floor. Multibeam sonar collects bathymetry information for creating detailed relief maps, much like a hiker’s topographic map. Sidescan sonar produces three-dimensional views of the bottom by bouncing sound waves off the bottom and measuring the strength of the reflected signals. These signals can detect subtle topographic features only a few centimeters high, and also indicate whether the seafloor is soft or hard, rocky, muddy, or silty. Sub-bottom sonar can show boundaries between layers of mud and rock below the seabed and therefore tell us about past geological events. 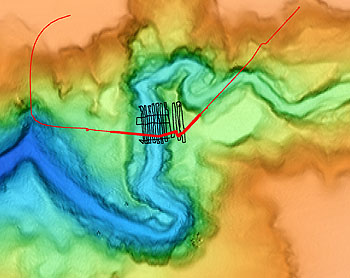 This map shows the location of the mapping AUV missions. The red line shows the track of the first autonomous survey. The black lines show the “lawnmower” tracks followed by an earlier, ROV-mounted survey. Image: David Caress (c) 2005 MBARI

Mapping via AUV has some distinct advantages over mapping using traditional shipboard sonars. The resolution of a sonar system depends on, among other things, how close the sonar is to the bottom. Because MBARI’s AUV can fly as low as 30 meters (about 90 feet) above the seafloor, the on-board sonars can distinguish fine-scale details that would be invisible from shipboard sonars. In addition, an AUV can map an area three times faster than a ship towing sonar equipment. For mapping at even higher resolution, the AUV can be carried to within 10 to 20 meters of the sea floor by mounting it under MBARI’s remotely operated vehicle (ROV) Ventana.

In order to map an area as completely as possible, the MBARI AUV is programmed to fly in a “lawnmower” pattern, making a series of side-by-side passes, or swaths, up and back across the zone to be mapped. The swaths overlap by varying amounts, so the AUV also makes a few passes at 90 degrees to the first passes in order to determine how the swaths line up with one another. 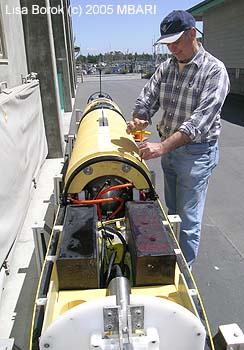 In addition to the three sonars, the mapping AUV also carries a navigation module, an electric propulsion motor, an on-board computer, and a 22-pound emergency drop weight. The drop weight can be jettisoned should the vehicle become stranded, allowing the AUV to float—eventually—to the surface. The three sonar instruments are packed into the AUV’s 0.5-meter (21-inch) diameter shell. Each instrument is contained in a sealed pressure housing that can withstand repeated dives to 6000 meters (roughly 18,000 feet).

According to AUV group leader Hans Thomas, one of the biggest challenges in designing this AUV was coordinating the sonars to send and receive signals in a compatible sequence. If not timed properly, the pulses emitted by each device would result in a jumble of uncoordinated data coming back to the receivers. Thomas likens this problem of decoding tangled data to listening for a single sentence in the middle of a noisy cocktail party. In addition, motor noise and electronic signals from other parts of the AUV payload had to be shielded or altered to prevent them from interfering with the sonar “conversation.”

The engineers began preparing the AUV for its first autonomous mapping mission a week before the actual dive. As in a space launch, on-board systems were given final tests and inspections, then secured for the trip into an inhospitable environment. Even the smallest leak in the pressure housings would have caused catastrophic results; therefore, technical staff used lint brushes on their clothes to assure that no stray hairs or fibers fell onto critical O-rings. After each system was readied, the entire AUV was run through a series of signal tests. Then engineers lowered it into the 375,000-gallon MBARI test tank to adjust the vehicle so it was slightly buoyant, and to make sure the entire package was balanced. 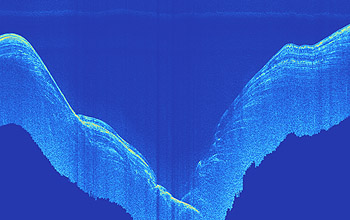 After tank testing, the torpedo-shaped AUV was hoisted on board its support ship, R/V Zephyr. A predetermined mission profile was then loaded into the AUV’s computer. This program established the mission’s route, depth, and details such as how close to canyon walls the AUV would be allowed to go. Once on station—six miles off of Moss Landing and above the north rim of Monterey Canyon —the AUV was lowered overboard. The bright yellow sub then flew solo within the axis of the canyon for about 45 minutes. Its mapping trip completed, the AUV returned to a predetermined rendezvous point at the surface. By day’s end, the AUV was back in the lab at MBARI where its data were downloaded for evaluation.

In Hans Thomas’ words, “The day went fabulously!” All systems performed as planned and the mission was completed without any problems. David Caress, the scientific coordinator for the AUV mapping effort, was also pleased with the day’s results. His research interests include morphology and sediment transport processes in submarine canyons. Data brought back from the AUV mapping missions will provide him and others with highly detailed information to expand their research. 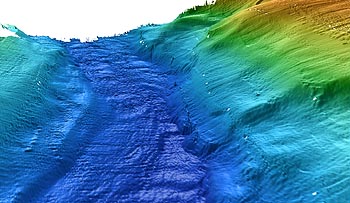 During the AUV’s next few missions, MBARI engineers hope to fine-tune some of the sonar settings to obtain more accurate readings. After the last phase of testing and debugging of the AUV’s complex sonar system is completed, it will become available for scientists studying features such as benthic habitats, methane hydrate, and sediment deposits.

Less than five percent of the deep sea has been studied, even though seventy percent of our planet is covered by ocean. The mapping AUV extends our ability to explore the deep sea, much in the same way that the planetary rovers Spirit and Opportunity have given us a fresh understanding of Mars. Unlike those vehicles, MBARI’s AUV can fly into the unknown and return, all in a day’s work.