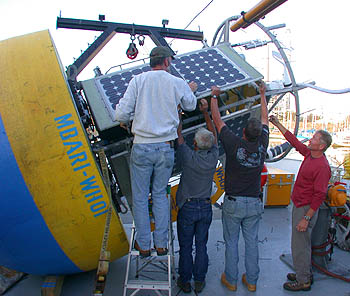 Mooring engineers from Woods Hole Oceanographic Institution make a last-minute inspection of the new MOOS test mooring on board the R/V Point Sur before heading out to sea. Photo: Mark Chaffey

Researchers from MBARI and Woods Hole Oceanographic Institution (WHOI) recently worked together to design, assemble, and launch a new research mooring off Monterey Bay. The primary goal of this project is to test a new type of mooring cable that not only anchors the mooring to the sea bottom, but also transmits data and electrical power between the surface and the deep sea. The new mooring, known as MOOS Test Mooring-3 (MTM-3), was deployed about 60 miles offshore of Moss Landing, in water about 3,000 meters (almost 10,000 feet) deep.

This is the third in a series of test moorings deployed under MBARI’s Monterey Ocean Observing System (MOOS) program. Like the previous MOOS test moorings, the MTM-3 is designed to address two of the biggest challenges in deep ocean research: 1) how to provide long-term power to instruments on the deep seafloor, and 2) how to get data from these instruments back to the surface. Collecting electrical power at the sea surface, using solar panels and wind generators, is no big deal. However, running electrical wires and fiber-optic cables from the surface down to the seafloor is a difficult engineering challenge. Most moorings are attached to the seafloor using nylon anchor lines, which absorb the force of winds, waves, and currents by stretching. But the copper wires and fiber-optic cables used for data and power transmission can hardly stretch at all without breaking.

To address this problem, the MTM-3 uses a revolutionary new design. Four fiber-optic cables and fourteen copper wires are embedded in plastic and coiled 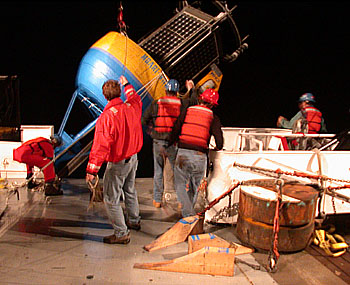 The buoy for the new MOOS test mooring was deployed before dawn. This allowed plenty of time for the delicate job of deploying the mooring cable before the wind picked up in the afternoon. Photo: Mark Chaffey

in a spiral around a stretchable nylon mooring rope. In theory, as the nylon rope stretches, the fiber and copper cables will uncoil instead of breaking.

After more than two years in development at Woods Hole, this new cable was deployed off the Central California coast on September 28, 2005, for a year-long field test. During the next year, instruments on the mooring will measure the stresses and strains on the cable, as well as the electrical and signal-carrying capacities of the copper wires and glass fiber strands. This data, along with information on wind and wave conditions, will be sent back to shore via satellite so that engineers can monitor the mooring’s performance in real time.

The new cable was designed by a dedicated team of engineers at Woods Hole, including Dan Frye, Walter Paul, Norm Farr, and Mark Grosenbaugh, with considerable help from Doug Bentley at Cortland Cable Corp. The deployment was led by Will Ostrom, Jim Dunn, and Neil McPhee. MBARI engineers and marine operations staff helped construct the surface buoy and the instruments for monitoring the cable. During the weeks before the deployment, the WHOI and MBARI crews worked together to assemble the mooring and cable system. 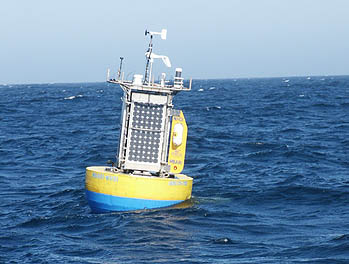 The MTM3 mooring rides the afternoon wind waves off Monterey Bay. Solar panels on all four sides of the buoy will provide electrical power for a variety of scientific and engineering instruments. Photo: Norman Farr

Although the deployment of this cutting-edge system was generally successful, some of the optical fibers stopped sending data while the anchor was sinking to the sea bottom. Despite this setback, WHOI and MBARI engineers will still be able to monitor the physical performance of the new cable using signals transmitted by the copper wires. This data is being processed on shore and uploaded automatically to the internet using MBARI’s Shore-Side Data System (SSDS).

This collaborative project is the third field test of a surface-to-seafloor riser cable at MBARI. The first two MOOS test moorings (MTM-1 and MTM-2) used an MBARI-designed cable that absorbed shock by using underwater floats to form an S-shaped curve in a low-stretch mooring cable. Both the MBARI and WHOI teams will be watching closely during the upcoming winter storm season to see how the new mooring design performs.

When it comes to designing monitoring systems that can survive in the open ocean and the deep sea, oceanographers and ocean engineers have their work cut out for them. This joint project shows how different research groups can combine their skills and experience to create new tools that will move ocean science forward in the 21st century.

The MTM-3 project was funded by NSF’s Ocean Technology and Interdisciplinary Coordination Program under Grant No. OCE-0337893.