Mapping debris on the deep seafloor 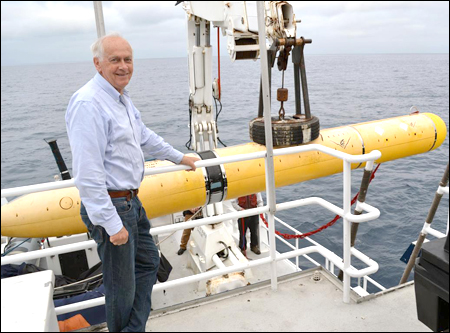 On Monday, a group of MBARI scientists led by Peter Brewer headed south along the California coast on the Western Flyer. They are revisiting an area south of Santa Cruz Island that was previously used as a disposal site for both civilian and military debris. Last year, Brewer and his team explored the area using an autonomous underwater vehicle (AUV) to identify and map possible targets–objects that protrude from the seafloor. Last year they discovered many empty 55-gallon barrels and canned goods in the area. They later were able to inspect only some of these targets with the video camera on a remotely operated vehicle (ROV). This week, Brewer’s group and Flyer crew members will conduct AUV and ROV operations simultaneously. As the AUV maps unexplored areas on the seafloor, the ROV searches for targets that were previously identified by the AUV. The new maps created today by the AUV will be processed tonight and guide the group on where to send the ROV next.