Swarming and the future of oceanography 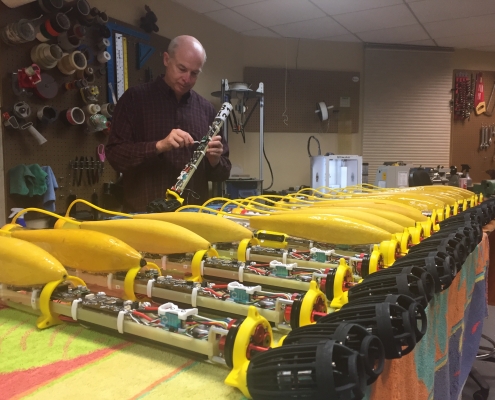 Swarming—the cooperative group behavior of large numbers of similar vehicles—can be used for much more than light displays and sensor networks. When the instinct for swarm behavior is embodied on each vehicle in a group, it becomes a powerful management tool giving access to new modes of data collection and ocean exploration. Distributed swarm systems make it easy to collect synoptic datasets allowing the study of transient ocean processes through their full spatial and temporal evolution. Self-organizing swarm behaviors make a group of autonomous vehicles function as one vast sensor that can span complex phenomena and track gradients that confound individual vehicles. Cooperative groups of relatively low-cost vehicles can advance exploration in potentially high-risk areas, such as under ice sheets, by embracing risk rather than shying away from it. This presentation will describe how swarming has been implemented so far and the big opportunities ahead.