The long-range AUV (LRAUV) team worked with the U.S. Geological Survey (USGS) in August 2016 to demonstrate some of the capabilities of MBARI’s LRAUV to investigate food webs in the Great Lakes. Through a USGS Innovations Grant, the team shipped the LRAUV Tethys along with spare parts and tools to Charlevoix, Michigan, in late July. MBARI Engineers Brett Hobson and Brian Kieft deployed the AUV with a team from USGS for a 1,023-kilometer tour of Lake Michigan, primarily looking at the abundance of phytoplankton. Ever since the introduction of several invasive species of clam, the water in the lake has progressively become as clear as a tropical sea, much to the delight of the tourists and a couple of MBARI engineers. However, the foundation of a normal food chain pyramid in a lake like that should be based on the primary producers that not only cloud the water, but provide the food for the bigger fish, like the Pacific Salmon they stock it with. Near the end of the three weeks of operations, USGS organized a media day where a local congressman came out on the boat to recover Tethys; most of the local papers and news programs featured the project prominently. 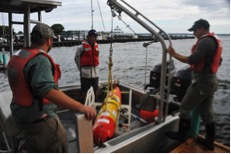 LRAUV Tethys aboard the USGS vessel

LRAUVs Tethys and Makai were busy offshore during September, racking up over 700 hours conducting missions for the Monterey Bay Time Series, Targeted Sampling, and CANON projects. LRAUV Makai spent several days working with collaborators from CalTech and the Woods Hole Oceanographic Institution on AUV path planning control driven by now-casts from a dynamic ocean model of the area that was being updated with AUV observations. We hope this may evolve into a useful technique to autonomously guide vehicles toward ocean features of interest like frontal boundaries or eddy cores.