Faults, Vents, and Seeps I

Most of the Gulf of California’s long, narrow seafloor basins are associated with transform faults, where segments of the Earth’s crust slide past one another. Throughout the gulf, transform faults alternate with volcanic spreading centers (see map here). Researchers will use the ROV Doc Ricketts to search along the transform faults for evidence of recent geologic activity on the seafloor, especially active faulting, underwater landslides, gas vents, or fluid seeps.

During these legs, researchers will first conduct a series of exploratory dives, looking at potentially active seafloor areas that have been identified using maps created by the MBARI seafloor-mapping AUV. They will be ground truthing the recently collected AUV maps and collecting physical evidence of recent geologic activity. They will return to specific sites to collect samples of seafloor fluids and seafloor animals for biological and geochemical studies to further investigate sites of seafloor fluid seepage.

Some of the specific objectives of these cruises will be: 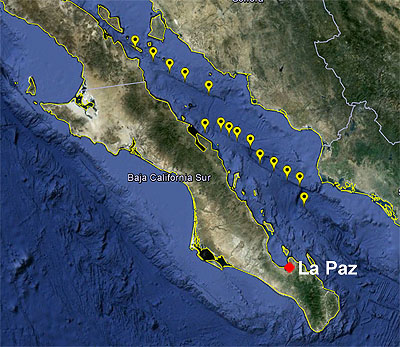 Dive sites for the Faults. Vents, and Seeps research program.

October 15, 2015
Our goal today was to search for patches with clams of varying sizes.

October 15, 2015
The ROV traversed up the side of this mound and we discovered an extensive chemosynthetic community surrounding a large fissure, or cave.

October 15, 2015
We traveled back to the northern part of the Guaymas Basin.

October 15, 2015
Today we collected an interesting worm on the wall of the canyon amongst the tubes of a lot of other worms and hydroids.

October 15, 2015
The biologists collected this beautiful Acesta clam on our first dive today. It had a sea star and encrusting sponge on its shell.

October 15, 2015
This dive was a great illustration of the combined impact of geological, chemical, and biological processes on the seafloor. All the scientists were excited!

October 15, 2015
This low-oxygen seafloor in the Gulf of California might give us a glimpse into the future of our coastal oceans.

October 14, 2015
The science team, ROV pilots, and many members of the ship’s crew gathered around the ROV for a final group photo as the ship was steaming to port.

October 14, 2015
On this leg of the expedition, we have biologists who can take advantage of some of the geology samples to look for by-catch. Today, Shannon Johnson found some animals on rocks that were very interesting to her!

October 14, 2015
Today we dove the ROV Doc Ricketts into a long linear trough only 15 meters (50 feet) wide at its base. This was barely wide enough for the ROV to turn around without banging into the sides of the trough.

October 14, 2015
It takes a well-oiled team to keep all systems working on the Western Flyer during this 97-day expedition.

October 14, 2015
Today was a very interesting day geologically and biologically. One of the most exciting moments was when we finally collected some clams!

October 14, 2015
Science is an adventure. It is never the same and you can never count on anything, expect the unexpected and then the even more unexpected will happen!

October 14, 2015
What can you learn from a dead, single-celled organism buried in deep-sea mud? Almost everything!

October 14, 2015
We collected a green volcanic rock covered in sponges and nereid and serpulid worms. Shannon Johnson picks animals off the sampled rocks.

October 14, 2015
You might think looking at mud all day could be kind of boring. But, today was an exciting day of sampling.

October 14, 2015
The expedition is now more than halfway completed and the R/V Western Flyer is once again transiting north through the Gulf of California from La Paz... this leg will primarily focus on the faults and seeps along the transform fault line where the North American and Pacific Plates meet.