The primary mission for this expedition is to investigate the chemistry of the pore water—water that occupies the space between seafloor sediment particles—that surrounds various geologic features and active natural gas vents in the Gulf of California.

Peter Brewer’s research group will use as their primary tool a laser Raman spectrometer, which can bounce a specially-tuned laser beam off of almost any object or substance, and receive back a signal that provides information about that object’s chemical composition and molecular structure. This tool will allow the group to get chemical data back from the seafloor in real time.

In addition, the research team plans to take a series of push cores for pore-water sampling for comparison with the Raman and long-term studies. Gas and water samples will also be collected near the vents to study their impact on the local water chemistry, and for comparison with local gas hydrate compositions.

If natural oil seeps are found, the group plans to study oil droplets, measuring how quickly they rise to the surface. They will also measure the release of natural gas from the droplets as they transit up to the surface. This provides in microcosm a natural analogy of processes occurring at human-induced oil releases.

In addition, water samples will be collected using CTD casts for collaborators J. Martín Hernández Ayón and Gabriela Y. Cervantes from the Universidad Autónoma de Baja California in Ensenada, and for Joseph Murray and Abbey Chrystal—graduate students from University of California, Santa Cruz.

Dr. Hernández Ayón is studying the inorganic carbon system, ocean acidification, and biogeochemistry in coastal regions near Baja California and the Sea of Cortez with a special interest in the oxygen minimum zone. Joseph Murray is interested in the effects of coastal runoff and its impact on nitrogen-based nutrients. Abbey Chrystal is a paleo-oceanographer looking at the record of long-term changes in seawater pH recorded in the sediments. 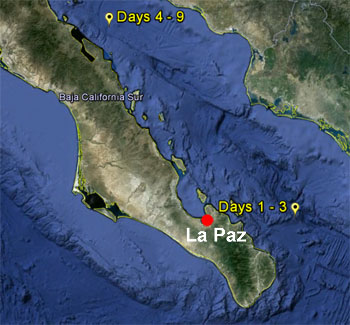 October 14, 2015
Today was our last chance to search for unusual chemical signals indicative of fluids being forced through the seafloor in the Gulf of California.

October 13, 2015
One seamount and one slump at the edge of the continental margin attracted our attention today. Like yesterday, some of the terrain kept us riveted to the video monitors.

October 13, 2015
Today, the science team covered a lot of fascinating territory at a fracture zone. Large boulders, rubble, cliffs, a variety of animals; if the same territory was on dry land, it would be as beautiful as a national park.

October 13, 2015
Different territory, different chemical activity. Today we moved to a transform fault—a spot where tectonic activity created cracks in the sea floor at right angles to the spreading center—and found methane and cold seeps, in addition to sulfur.

October 13, 2015
Persistence paid off today from searching an unexplored area of the sea floor with a beautiful outcrop covered with large patches of yellow bacteria-an indication of sulfur-laden water rising up from below.

October 13, 2015
The best of explorers set out for points unknown making an educated guess about what they might find, but being open to serendipitous discoveries.

October 13, 2015
After three days in port to refuel, switch out some crew members, and mobilize the next group of scientists and their equipment, the Western Flyer set sail from La Paz early this morning.