Nearly the entire temperate to tropical eastern PacificOcean has strong gradients in both temperature and oxygen concentrations from the sea’s surface to its “bathyal zone” (the area of the ocean extending from depths of approximately 1,000 to 4,000 meters). Temperatures near 1,000 meters are typically around four to five degrees Celsius (39-41° F) with very low oxygen levels. These conditions are related to the high coastal productivity and the consumption of oxygen that occurs as bacteria break down the sinking organic debris.

In contrast, conditions in the deeper waters of the northwestern Gulf of California are quite different, due apparently to the downwelling of surface waters caused by shoreward Ekman transport. Seawater conditions at 1000 meters in the northwestern basins of the gulf are more typical of waters around 200 meters deep elsewhere, with warmer temperatures—around nine to 10° C (approximately 48-50° F)—and higher levels of oxygen.

The researchers on this leg of the expedition plan to deploy sensors on the seafloor in the Delfin and Salsipuedes basins of the northwestern gulf. From these sensors, scientists hope to obtain estimates of the seabed fluxes of nitrate. Researchers will also use the Benthic Respiration System to evaluate the metabolic rates of some of the larger denizens of the seafloor under normal, high-carbon dioxide, and high-oxygen conditions.

While conducting these seafloor respiration experiments, the researchers will also use ROV Doc Ricketts to perform surveys of the seafloor, and to collect samples using push cores and the suction sampler. The sediment cores brought up from the seafloor will serve two purposes. Researchers will analyze the faunal content of some of the sediment cores in order to discover which organisms make up the seafloor communities. Other sediment cores will be analyzed for their chemical content, providing an approximation of the flow of oxygen into or out of the sediment, an important factor for estimating the rate at which organic carbon is cycled back into the seawater.

The seafloor biology team will also conduct video transects with ROV Doc Ricketts to be used to document the larger inhabitants in the northwestern basins of the gulf. Once complete, scientists will perform similar studies in the waters off of La Paz in the southern part of the gulf, where seawater conditions are more typical of the eastern Pacific. 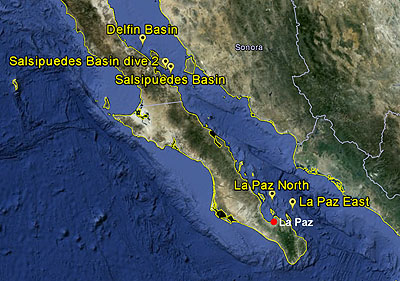 October 13, 2015
What an amazing trip we've had, in no small part due to the crew and the Doc Ricketts pilots on the Western Flyer.

October 13, 2015
By late afternoon yesterday, we'd made our way about 250 kilometers south from the Delfin Basin, into the Guaymas Basin to the east of the Baja California town of Santa Rosalia. The wind was howling again....

October 13, 2015
Today we're transiting south to the Guaymas Basin, so most of our day was spent in the lab processing and organizing samples before the next Doc Ricketts dive.

October 13, 2015
We began slurping up urchins visible on the surface with a suction sampler, then dropping them one by one into seven of the respiration chambers in the benthic respirometer system (BRS).

October 13, 2015
Today started off with a flurry of excitement as the benthic respirometer system (BRS) we deployed yesterday was released from the seafloor shortly after 6:00 a.m.

October 13, 2015
El Norte had blown itself out, and we looked forward to light winds and calm seas. What we didn’t realize was that the rough, stormy conditions were now beneath us.

October 13, 2015
We dove to 970 meters (3,200 feet) and observed the seabed for a while, identifying the local fauna, looking for odd animals rarely seen in California waters.

October 13, 2015
The winds in the Sea of Cortez can be unpredictable and change rapidly, but when an “El Norte” blows, it usually lasts several days.

October 12, 2015
The second day of our leg began just as the sun snuck above the eastern horizon. We prepared the benthic respirometer system (BRS) for deployment on the back deck.

October 12, 2015
Eight MBARI scientists and two Mexican collaborators arrived in La Paz over the past few days to prepare for Leg 3 of the Gulf of California cruise on the R/V Western Flyer.