The California Undercurrent is a poorly-described eastern boundary countercurrent, which originates in the Eastern Tropical Pacific (ETP) warm pool and flows northward along the continental slope and shelf of North America. Along its path, the CU transports water and organisms to the Monterey Bay and beyond. 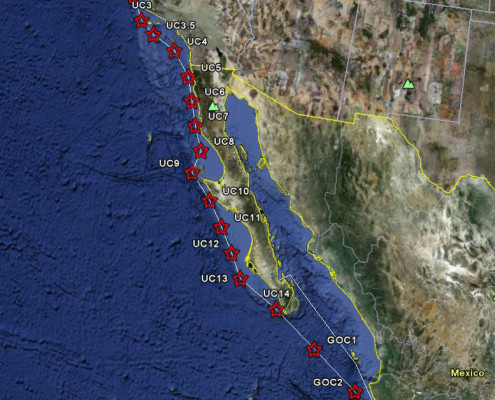 The waters of the CU are deficient in oxygen and nitrate but may be enriched in iron. Off central California, the CU is typically weak and subsurface during the first half of the year, but strengthens and shallows during the latter half of the year. Because the CU provides source waters for coastal upwelling, its biogeochemistry and chemical evolution have significant consequences for the overall productivity of the California Current System.

For almost 20 years, the Biological Ocean Group at MBARI has utilized moorings and ships to measure the biological and chemical characteristics of the waters in the Monterey Bay, including levels of CO2 and dissolved inorganic carbon. Now, the Western Flyer transit south to the Gulf of California provides an opportunity for this group to trace the evolution of the Monterey Bay’s waters as they flow from the ETP to central California.

October 9, 2015
Francisco, whose work has taken him to over 50 countries, observes that having a multi-national research team not only makes the work more interesting, but produces better results.

October 9, 2015
A research cruise is a lot like the classic Bill Murray movie Groundhog Day-you keep living the same day over and over again, and you can't leave, so all you can do is try to do a better job each day. So goes Day 8.

October 9, 2015
A "day" at sea on a research cruise is not quite as formal as a period of daylight followed by a period of darkness. Days begin when you wake, and end when you can find a long enough block of time without anything to do that you can sleep.

October 9, 2015
So what does this all mean? Well, if you’re a scallop, or a mussel—if you live in the ocean and rely on the oxygen dissolved in its waters—it means it may get very difficult to breathe. As an oxygen minimum zone expands and seeps up onto the continental shelf, that’s very bad news for stationary seafloor dwellers, who can’t move out of its path. And speaking of paths, fortunately ours and the storm’s that we’re under right now are headed in different directions. I’m hoping tomorrow morning’s Mexico is the tropical Mexico I was expecting.

September 11, 2015
By nine o’clock last night both CTD rosettes were back on deck, Francisco Chavez and Haibin Zhang had finished their plankton tow, and our captain, George Gunther, set the Western Flyer’s course for an overnight steam to today’s station, “UC4.”

September 11, 2015
It's just after midnight, and we're standing on the rear deck as the winch pulls the CTD rosette through the last few meters of water and back through the ocean's dark surface.

September 11, 2015
Steaming out of the Moss Landing harbor on a ship called the Western Flyer with ROV Doc Ricketts on board and a course set for the Sea of Cortez, as an avid fan of John Steinbeck's work, it's fairly humbling, a good deal intimidating, and a whole lot exciting to write those words.