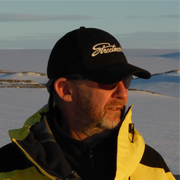 William (Bill) Kirkwood has been with the Monterey Bay Aquarium Research Institute (MBARI) since 1991, and in that time has held many positions, including Director of Engineering. Bill has also developed a number of vehicles and instruments at MBARI including the remotely operated vehicle (ROV) Tiburon, the autonomous vehicle class (AUV) Dorado and the deep ocean Raman systems (DORISS) to name a few. Technical expeditions have included; operating autonomous underwater vehicles (AUVs) under ice in the Arctic, 3 months in Antarctica with the Australian Antarctic Division working in the field near Casey Station, piloting the ROV Jason in the Mariana Trench and diving with the human occupied submersible Alvin to a depth of 4370 meters in the Costa Rican Trench.

Bill is also active in the community as an Adjunct Professor at Santa Clara University (SCU), in the Engineering Department, and has developed numerous vehicles and instruments with undergraduate and graduate students since 1999. Mr. Kirkwood also sits on the board of advisors at SCU for the Mechanical Engineering Department.

Currently, Bill is the Treasurer for the Institute of Electrical and Electronic Engineers (IEEE) Oceanic Engineering Society as well as Chair of the Innovative Technology and Co-Chair of the Autonomous Vehicles Committees within OES.

Bill’s current focus is on the creation of the open source technology package xFOCE that makes technology available for in situ pH manipulation to anyone interested in ocean acidification (OA) research. This can be found at www.xfoce.org