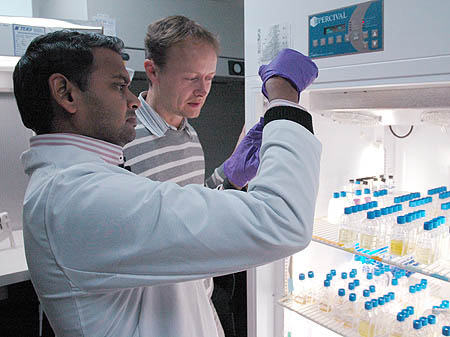 For the next month and a half, MBARI will be hosting Gurdeep Rastogi, a molecular microbiologist from India. Rastogi is working with MBARI microbial ecologist Alexandra Z. Worden and her team to study how populations of ultra-small algae (picophytoplankton) vary over space and time in Chilika Lagoon, one of the largest brackish-water lagoons in Asia. Rastogi comes to the Worden lab under a visiting professorship sponsored by the American Society of Microbiology and the Indo-US Science and Technology Forum. His visit is also supported by Worden’s senior fellowship in the Integrated Microbial Biodiversity Program of the Canadian Institute for Advanced Research.

Because picophytoplankton are so small, microbiologists can only study their populations through gene or genomic analysis (for example, by sequencing their DNA). Rastogi and his team collected water from Chilika Lagoon over multiple spatial and temporal scales and extracted DNA from the organisms in these samples. He sequenced their genes through high-throughput DNA sequencing and is working with the Worden lab to analyze these millions of DNA sequences using a variety of statistical and bioinformatic tools. Rastogi will also use MBARI facilities to count picoplankton cells and “amplify” DNA from rare or previously unknown groups. This will help him figure out what types of picoplankton live in Chilika Lagoon.

Rastogi hopes to use these studies to understand spatiotemporal changes in the population structure of picophytoplankton communities. This is important for assessing how they respond to changing temperature and nutrient concentrations in Chilika Lagoon and how communities might change under future perturbation scenarios. This research dovetails with the Worden lab’s goal to characterize seasonal variations in the diversity of marine phytoplankton in different regions of the world ocean. Worden is particularly interested in areas that are productive and support high biodiversity, as well as those that are climate sensitive or sustain large human populations. Chilika Lagoon is one of these sites. It is a biodiversity hotspot and is designated as a wetland of international importance under the Ramsar Convention.

Worden and Rastogi see this visit as a way to foster future collaborations with students from Rastogi’s home institution, the Wetland Research and Training Centre (WRTC). The WRTC was recently developed as a nodal research lab of Chilika Development Authority under the Forest and Environment Department of Government of Odisha–making ecological understanding of the Lagoon a major research priority.