Increasing the longevity of the wave-power buoy 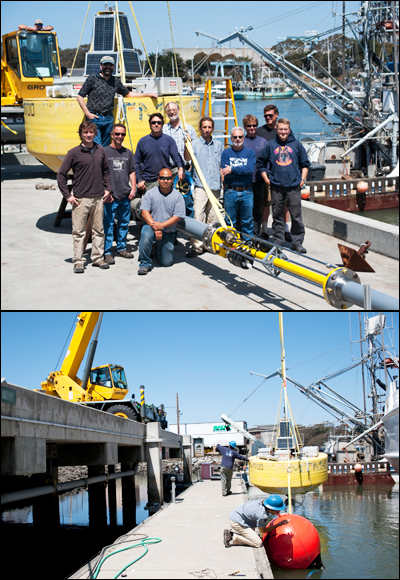 In these 2013 photos, a team of MBARI engineers prepared the power buoy for deployment. The deployment went well overall, but after 25 days, the system failed due to wear. The engineering team is currently working on increasing the power buoy’s longevity.

Beginning in 2009, a team of MBARI engineers (led by Andrew Hamilton) designed a wave-power buoy—an instrument that utilizes ocean waves to produce useable electricity (typically 300-400 Watts on average, depending on the weather). The power buoy (see graphic) has a surface float 2.5 meters across and a long tether connected to a large metal plate hanging in the water 30 meters below. A hydraulic generator is incorporated in the system, near the surface float. The power buoy will eventually provide oceanographic instruments with a more generous and accessible supply of electricity at sea. The engineering team has tested the instrument at sea numerous times and is currently working to improve its longevity. Mechanical Engineer Francois Cazenave explains, “We are designing a new submerged plate that will be more stable and will reduce the load on the tether in case of very large waves.” The longest deployment of the power buoy so far was for six weeks. The team is aiming for a six-month deployment, beginning in early summer 2014.